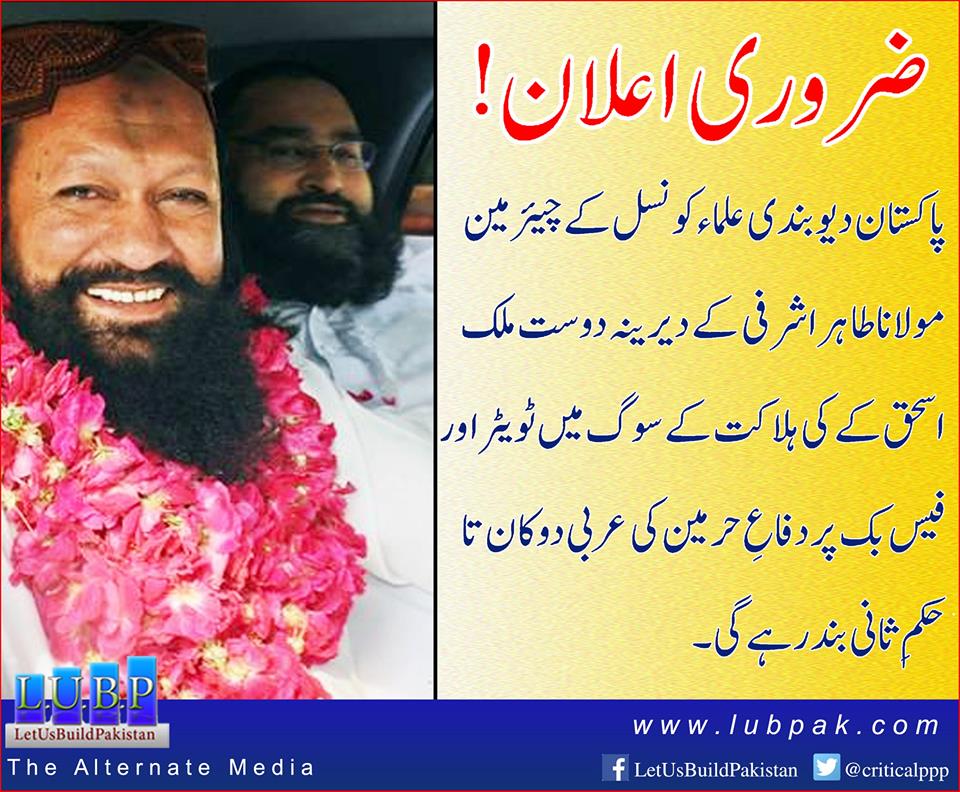 Condolences to all those Sufyani Liberals who support Tahir Ashrafi whose buddies are the whose who of ISIS-affiliated ASWJ-LeJ.

Condolences to PCO Supreme Court Judges; especially Iftikhar Chaudhary, Jawad S. Khawaja and Asif Khosa – you overturned standing convictions against Malik Ishaq even as he boasted about killing more than 100 Shias in your courts. You were too busy serving him biscuits and standing up in reverence to him to take note of such trivial things as ‪#‎ShiaGenocide‬

Condolences to all those Sufyani liberals, Muawiya Marxists and other assorted Civil Society types who STILL defend this judiciary as “anti establishment”

Condolences to Prime Minister Nawaz Sharif and his family regime – you were the biggest allies of ASWJ-LeJ of which Malik Ishaq was the Vice President. You fought the 2013 elections together as a coalition and even awarded Malik Ishaq’s ASWJ comrades like Abid Dogar a PML N ticket.

PM Nawaz Sharif, your Sufyani liberal employees will continue to defend you as “anti establishment” even as you continue to be Saudi Arabia’s numero uno errand boy in Pakistan.

I request all Sufyani liberals to do the Matam for Malik Ishaq. Express grief at his death and term his killing as “extra judicial”. Maintain a straight face when you are doing this because it was your beloved judiciary that made sure that Malik Ishaq goes free. And stays free. And it was your PML N sponsors who were paying Malik Ishaq a monthly stipend from the Punjab government.

Today is a sad day for all those ASWJ-LeJ supporting Ashrafi liberals of Pakistan. You tried so hard to defend and deflect ASWJ’s crimes against humanity.

Here is something to cheer you by. We know you really didn’t care about Shia Genocide and often tried to obfuscate it. But at least Cricket gets a boost from Malik Ishaq’s death. Along with the scores of Sunnis, Shias and Christians killed by Malik Ishaq – his terrorist group ASWJ-LeJ also attacked the Sri Lankan cricket team in 2009.