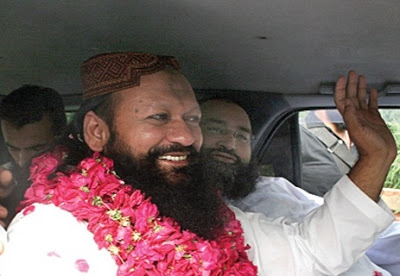 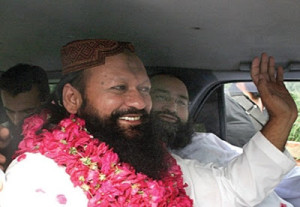 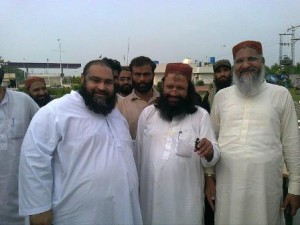 Hafiz Tahir Ashrafi and Malik Ishaq, are indeed two of a kind, in their blatant Deobandi extremism- one shouts fatalist, hate-speech, the other follows with fatal hate-crimes. Speeches can kill, when killers are influenced by hateful ideologies. They simply use different methods of mayhem: Ashrafi incites violence verbally: Castigating Shahbaz Bhatti led to his murder by Malik Ishaq (d. 29 July 2015). This is simply a different method for Deobandi goals. Malik Ishaq is also responsible for self-admitted, murdering of over 100 Shia deaths; Hafiz Ashrafi is indirectly responsible for harm perpetrated on Shias, due to his demonization of these and other religious minorities.

Great news, for Ali Abbas Taj though! The level-headed editor of LUBP made the list of those to be maligned by this evil Ashrafi-Deobandi cleric. Given the message and knowledge that Ali Taj conveys to the public seeking truth, he is now to be honored by the vulgar, vociferous and advocacy of violence voiced by Tahir Ashrafi Deobandi. Excuse the alliterations- the prose seemed right in the event of Malik Ishaq’s death and Cleric Hafiz Tahir Ashrafi’s virulent incitements over social media.

The Holy Vessel of Hypocrisy, Takfiri Tahir Ashrafi, infamous in self-righteous outrage and hate speech against Ahmadis, Sunni Sufis, Barelvis and Shias. He routinely threatens human rights activists and bloggers who challenge him on social media. Now, he has verbally assaulted Ali Abbas Taj, a balanced and moderate voice of progressive tolerance of Let Us Build Pakistan.

The false prophet, Deobandi Cleric Hafiz Tahir Ashrafi’s has been advocating violence and encouraging assassinations for decades (threats against Shahbaz Bhatti, 2010 led to his assassination) – Tahir Ashrafi is a despicable hypocrite who on the one hand disingenuously rails against inciting violence in Muslim society by using the name of religion, contending that violence has “no affiliation with Islam,” that “Islam is a religion of peace and brotherhood,” while vociferously advocating violence toward those who are anti-Taliban or against his Deobandi-speeches that amount to verbal instigation of terror. Tahir Ashrafi remains infamous for hate speech primarily against Shias, but also, against Hindus, Ahmadis, Sunni Sufis, Barelvis and routinely threatens human rights activists and anti-Taliban bloggers who challenge him on social media.

Hafiz Tahir Mahmood Ashrafi, who heads the ‘clerics council’ in Pakistan, alleges to be a ‘moderate’ while blasting Ali Abbas Taj in 2015, and among the decades prior verbally calling out anti-Deobandi moderates; in 2010, he threatened physical harm to the past Minorities Minister in Pakistan, Shahbaz Bhatti, who was later assassinated for trying to change the blasphemy laws.

Well, finally today, on 29 July 2015 justice prevailed over the Salafist Deobandi murderer and executioner, Malik Ishaq in his death by Pakistani authorities. Leader of ASWJ/ Sipah-e-Sahaba/ Lashkar-e-Jhangvi Malik Ishaq, admitted the murderer of Bhatti, has admitted to killing 102 Shias or more, and murdering a multitude of Barelvi Muslims, including the terrorist attack on the Sri Lankan cricket, but consistently released from Pakistani prisons by Jihadist-sympathetic Chief Justice’s. Thanks to Shahbaz Sharif and Iftikhar Chaudhry, the LeJ chief Malik Ishaq became a symbol of Pakistani injustice system, PMN-L Taliban sympathies, and ISI funding and protection for ASWJ/SSP Deobandi murderers of Shia and those who challenge the Zia-legacy of Constitutional Blasphemy laws.

Malik Ishaq (1959 – 29 July 2015) as leader of Lashkar-e-Jhangvi, perpetrated broad daylight murdering of Shiites in Pakistan, and has had a history of being released due to “insufficient evidence” (he was released also for the 1996 Shia murders, along with Akram Lahori (executed, January of 2015).

According to local reports, Malik Ishaq was killed while within Muzaffargarh, Punjab province, in a police encounter by the Counter Terrorism Department (CTD) of Punjab Police (Pakistan) on the morning of 29th July 2015 along with his two sons Usman and Haq Nawaz, while police were taking him to locate an illegal weapons storage. No more rose petals will be tossed at Malik Ishaq, and if justice continues in Pakistan, his apologist, Hafiz Ashrafi will be continued to be exposed for the hypocrisy of his duplicitous rhetoric.

So, Congratulations, Ali Abbas Taj! If you are on Hafiz Ashrafi’s hate list, it is because he fears your power and influence in spreading the truth.