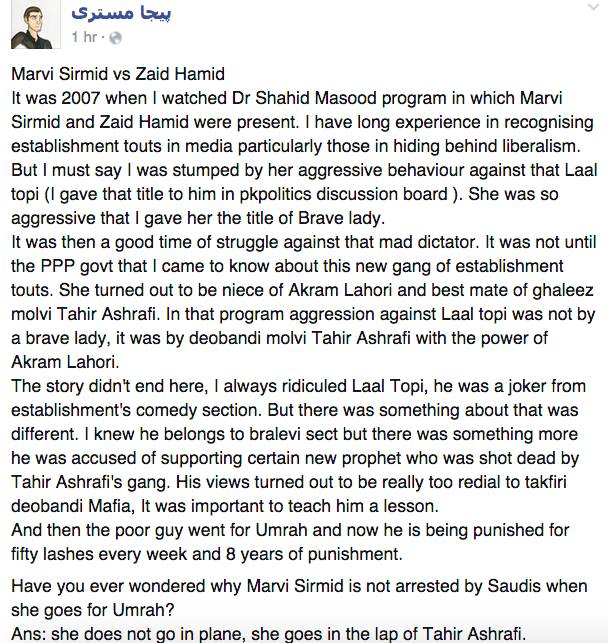 It was 2007 when I watched Dr Shahid Masood’s program in which Marvi Sirmid and Zaid Hamid were present. I have long experience in recognising establishment touts in media particularly those in hiding behind liberalism. But I must say I was stumped by her aggressive behaviour against that Laal topi (I gave that title to him in pkpolitics discussion board ). She was so aggressive that I gave her the title of Brave lady.

It was then a good time of struggle against that mad dictator. It was not until the PPP govt that I came to know about this new gang of establishment touts. She turned out to be niece of Akram Lahori and best mate of ghaleez molvi Tahir Ashrafi. In that program aggression against Laal topi was not by a brave lady, it was by deobandi molvi Tahir Ashrafi with the power of Akram Lahori.

The story didn’t end here, I always ridiculed Laal Topi, he was a joker from establishment’s comedy section. But there was something about that was different. I knew he belongs to bralevi sect but there was something more he was accused of supporting certain new prophet who was shot dead by Tahir Ashrafi’s gang. His views turned out to be really too radical to takfiri Deobandi Mafia, it was important to teach him a lesson.

And then the poor guy went for Umrah and now he is being punished for fifty lashes every week and 8 years of punishment.

Have you ever wondered why Marvi Sirmid is not arrested by Saudis when she goes for Umrah?

Ans: she does not go in plane, she travels as a guest of of Tahir Ashrafi.

The killing of ASWJ Vice President, Malik Ishaq Deobandi, must not exonerate his enablers in PML-N, Supreme Court, Jang Group and Deobandi lobby – by Ali Abbas Taj
Story of Dilawar Khan Wazir, a Pakistani journalist who was betrayed by his employer BBC