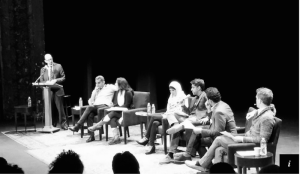 The following is my response to my friend’s article, Dr. Danusha Goska’s, “Pushing the “Islamophobia” Myth on National Public Radio,” published in “Jihad Watch,” July 27, 2015.

http://www.jihadwatch.org/2015/07/pushing-the-islamophobia-myth-on-national-public-radio
All panels that I have witnessed on Islamophobia seem to share a similar fiction: an attempt to perpetuate the victim status of Muslims by labeling anyone who dare criticize Islam, as an “Islamophobic” (Linda Sarsour does so here). Sadly, this victim status serves to protect the radicals in our midst.

Islam has a problem: Islamist terrorists. To deny this causes more problems. Continued obfuscation denies the Western world the benefit of learning that all Muslims are not Jihadists, and obscures which ones are good and which ones are bad, and what the distinctions are. The panelists are, with the possible exception of Asra Nomani, typical in the prevailing PC notion that we are Islamophobic if we mention Islam in the same breath as terrorists. The press and most panels on Islam obfuscate Islam, obfuscate distinctions between them, and therefore add to the problem: Ridding Islamophobia is as simple and as difficult as educating the public

Who are these assassins? Are they Islamic? Those who speak the truth on these matters, and are not aligned with the current U.S. presidential administration opaqueness have given terrorists the name: “Islamists.”  Though a religion might have sectors, sects, individuals, cults, who misbehave, or through history perpetrate atrocities (Salem Witch hunts, the Inquisition), obviously, not all Muslims are bad, any more than all Christians are bad. A Christian analogy to the Islamic problem, might be viewed through the lens of history as follows: The early Catholic Church struggled through history with Popes giving indulgences for money, and more recently the horror of pedophilia cases. How accurate would it be to pronounce, “These are not Christians, these are not Catholics.” The Church instead explains the history, and denounces these crimes, but never once said the perpetrators were not Catholic or Christian. All religions have flaws, as the congregation/participants, the clergy, Mullahs, Rabbis and so forth, are all human. Here are the facts:

The majority of the millions that are a part of Islam – most Muslims – are peaceful and devout. The overwhelming majority of Americans and Westerners would never disparage Islam, or Mohammad (PBUH). In my experience most of the American religious of all denominations, consider Allah (SWT) to be no different than the Christian God. But, to omit Islam from religions that can use reason to enlighten is to ignore its own tenants of Ijtihad or, “diligence” that encourages “independent reasoning” to determine the right path and interpretations of the Quran.

To deny this is to capitulate to pressures from that religion that resists any criticism as Islamophobia. Those who refuse to utter “Islamic Jihadists,” or “Islamist terrorists” are either ignorant of the facts, intentionally misleading, in fear, or using self-defeating appeasement strategies that encourage the “victim” label. Some are so politically correct as to avoid global reality. A global and regional Jihad is being carried out by terrorists.

It is important to know that those terrorists are from a radical ideological interpretation of the Islamic religion. These Wahhabi/Salafist and Deobandis include al Qaeda and splinter groups, like Daesh/ISIS/ISIL in Iraq and Syria, Boko Haram in Africa, Hamas and Hezbollah in the Levant, Taliban [TTP, Haqqani Network, ASWJ/SSP] in Pakistan, and lone wolf want-a-be’s in the Western world). What do they have in common? They are all radical Sunnis from the Wahhabi cult or Deobandi cults of Islam. Many of the suicide bombers are products of the Madrassas (religious schools) funded by Saudi Arabia.

Those that have been inspired to kill other Muslims (al-Qaeda, ISIS) were freed to do so by the radical Islamic theorist, Egyptian Sayyid Qutb (d.1966), who gave justification for killing innocents (though prohibited in the Quran). The Jihadists are purists from Saudi Arabian origins of Wahhabism- Religion: Islam. (read, The Looming Tower: Al-Qaeda and the Road to 9/11, 2006, Lawrence Wright). Muslims with this Takfiri ideology seek out and destroy sacred religious shrines, and have gruesome history of beheadings of both Sunni and Shia Muslims, Muslim tribal elders that opposed them in Pakistani Northern territories, Balochs, as well as, Ahmadis, Sufis, Hindus, and Christians- innocent men, women and children. There is no question that all Muslim terrorists are from the Islamic religion. They merely have a different interpretation of that religion.

If one wants to research with due diligence the specifics in order to distinguish the evil from the devout, that makes the most sense, but the mainstream press and U.S. administrations fail to do this. Devoid of PC notions, we discover that we are not Islamophobic if we attempt to decipher just which Muslims are terrorists.

Who are they? The Takfiri [Sunni Muslims who accuse another Muslim of apostasy] who are products originating from Salafist/Wahhabis. The eighteenth-century preacher and scholar, Muhammad ibn Abd al-Wahhab (1703–1792). Many in the South Asia region are Deobandis from the revivalist movement within Hanafi Islam.

Mullah Omar, (photo to the left) was the founder of the Taliban, here in typical black turban of Takfiri Salafists. Mullah Omar banned music, any form of entertainment, including sports and kite flying. He was notorious for his banning of soccer, using the soccer field for public displays of beheadings and torture from perceived crimes such as a women walking without a man, or having been raped, and cutting off limbs of countless suspects of unsubstantiated crimes, none with benefit of a legal justice system. Certainly this was not an honorable version of Sharia Law, as these draconian acts of public horror were despised by devout Afghans, and tolerated by the Afghans only in defeat, and ultimately by fear tactics – terrorism.

Mullah Mohammed Omar, emerged as Taliban leader in 1994, only by support from Major Gul and well-trained Special Forces Colonel Imam of the ISI in Pakistan. The Pakistan Generals preferred covert Islamists to establish “Strategic Depth” to control Afghanistan and Kashmir, indeed, India, by proxy, with ethnic Pashtun fighters (It had the double advantage of countering the movement for a separate Pashtunistan, popular among the Pashtun population).
Omar, after having ruthlessly killed of all his opposition, even former Mujahedeen commander-friends, “The Wrong Enemy: America in Afghanistan, 2001-2014” by C. Gal (2014). Omar then issued a special edict ordering the destruction of all non-Islamic statues, starting with blowing up of the Buddhas of Bamiyan statue, 1,700 years old, 150 feet high ancient, irreplaceable icons of aesthetic wonder and awe, at the foot of the Hindu Kush mountains of central Afghanistan. Such outrageous destruction continues to this day to defile and destroy religious sites in Iraq, Syria, Afghanistan and Pakistan. Even Shia Muslims are not safe when publically commemorating the martyrdom of Hussein ibn Ali (a.s.) on the Day of Ashura from Takfiri Salafist suicide bombers.

This is the reason I included a face; the face of the enemy, whether Mullah Omar of Taliban, Osama bin Laden of al Qaeda, or Abu Bakr al-Baghdadi of ISIS, or the new leaders that will take their place, their ideologies remain the same. Collective enemies of the Western world, Asia, Russia, South Asia, Middle East – a global threat  – also the enemy of Islam: Taliban, al Qaeda, and ISIS, and every Takfiri Deobandi: they all share the same ideology.

These murderers would also like the public to be misled by the narrative of “sectarianism.” That is, all killings the radical Deobandis perpetrate on Shia or Hazara’s can then be more readily dismissed as long term historical disagreements. Even the “Human Rights Watch” continues to use the “sectarian” label to what amounts to genocidal intent of Shia by these Takfiri Deobandis in Pakistan who pull out innocent Shias from Quetta/Waziristan/FATA out of buses and shout with glee as they saw off their live and suffering victims’ heads; and in the recent Peshawar murder of school children by the TTP; we have recently seen the line-up of beheadings in Iraq by Daesh (ISIS/ISIL). These are enemies of Islam.

All Islam and all Muslims are not terrorists, but Americans do not have the benefit if education in this area.

All the global terrorists have several things in common: all are radical Muslims of the Islamic faith that desire a Caliphate; most originate, to be fair, from a tribal cult.  The cult is Wahhabism or Deobandis, each sharing the same radical ideology. These Islamists include home-grown Muslim radicals, Jihadists from the Levant, the Maghreb, terrorists from South Asia, Burma, Malaysia, Indonesia, Africa, the “Stans” north or Iran and Pakistan, and Saudi Arabia, the Arabian Peninsula/ the Middle East; all jihadists on a global effort; some infiltrating the American Mosques are also radical Muslims of the Islamic Salafist faith. It does not benefit Muslims or Westerners the world over to avoid this reality.  To continue to deny this affords Muslims only a shared and fragile mythology.

Those not of these cults are, by and large, peaceful Muslims that should be respected. That said, the majority of Islam has remained silent on condemning terrorism. It would be of great global solidarity were the respected leaders of the Islamic Ummah of nations and Ulema of regions within those nations, the leaders of Muslim nations to join in united condemnation of Takfiri Deobandi and Wahhabi terrorists. The perception of Westerners who listen for criticism from the leaders in Muslim countries, and hear no consensus of condemnation, are left with understandable doubt about Islamic intentions. Islamophobia starts and spreads from ignorance of an uneducated public.

An exception is the recent condemnation in terms the US president timidly avoids, was the president of Egypt, Abdel Fattah el-Sisi when he said, “Islamic ideology is driving terrorists to kill,” in a speech to Muslim clerics. “Abdel-Fattah el-Sissi says, “Imams have duty to stop violence justified by sermons, writings.” Is President el-Sisi Islamophobic? Hardly.