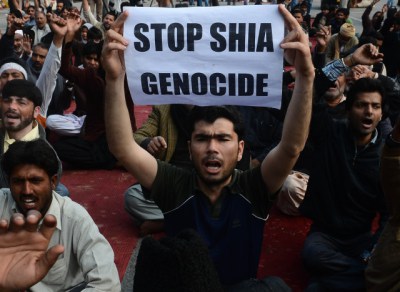 Four unidentified gunmen on motorcycles opened fire on people standing in line outside a passport office in Quetta. Two civilians, believed to be Hazara Shias, and a police constable were killed during the attack and eyewitnesses say that the shooters escaped on their motorbikes unchallenged. The Hazara Shia community in Quetta has been the target of bomb blasts, killings and other hate crimes for several years now. By some estimates, over 1,400 Hazara have been killed since 1999. This is not merely a sectarian conflict; it is a genocide. It is shameful for Pakistan that despite so many anti-terrorism efforts, the killing of the Hazara community is continuing.

The fact that the Hazara genocide has gone on for so many years unchecked is in itself a failure of the state to protect its people and particularly the minorities. The Lashkar-e-Jhangvi (LeJ), the main organisation responsible for these attacks, and its affiliates, are still operational. The leader of LeJ, Malik Ishaq was released by the Supreme Court in July 2011, after spending 12 years in jail. Despite the fact that the brutal attacks against Hazaras in Balochistan continue to occur and the LeJ claims responsibility for most of them, Ishaq has still not been rearrested.

There have been reports that militants patrol the streets of the two main Hazara neighbourhoods in Quetta, killing any Hazara that they see. The Deputy Inspector General of Quetta Police, Abdul Razzaq Cheema, admitted that the attack on Monday was a targeted sectarian killing and said that there was evidence that two banned terrorist groups, the LeJ and Jaish-ul-Islam, were behind it. He said, “Both the groups are separate entities but their aim is the same.”

If all this is known to the law enforcement agencies, why are these hate-mongers still able to carry out attacks in the open in broad daylight on busy streets? Although it does seem that the recent military operations in the tribal areas have been successful, the civilian government has not done enough to curb terrorism in the densely populated areas and urban centres of the country.

The National Action Plan has failed miserably and the government will have to take new measures to prevent terrorists from devouring the country. The killing of minorities, in particular, is a humanitarian crisis for which Pakistan has been criticised several times by the international community.

The government and military establishment’s resolve to target all banned terrorist outfits without discrimination should be implemented in letter and spirit. The military, paramilitary and law enforcement officials charged with apprehending terrorists in the country should not distinguish between confirmed terrorist groups and should avoid falling back into the same trap that has allowed terrorism to become so ingrained in Pakistan in the first place.