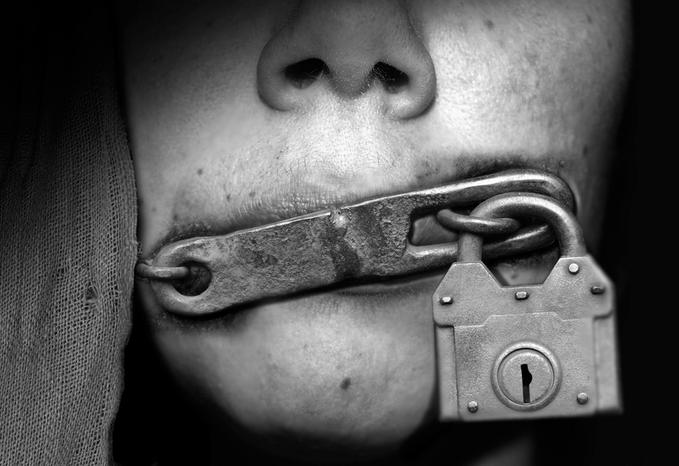 It is not for the first time that someone has insulted Imam Ali. For centuries, the descendants of Muawiyah bin Sufian and their affiliates and acolytes have been insulting him on every forum. Thus, when Ilmana Fasiah insulted Imam Ali and Bibi Fatimah Zahra (peace be upon them), there was nothing new or unusual about it.

Also nothing new or unusual was the protest that the contributors of Let Us Build Pakistan (LUBP) staged on social media. The protest was polite, and no one ever asked for any damage be done to Ilmana. I wrote to the effect that the condemnation of Ilmana meant no harm to her, and that her life was (and is) is as sacred as anyone else’s. In other words, the present liberal-mullah campaign to have LUBP banned and get its contributors killed began as ordinarily as it gets.

To begin with, Ali Mashadi aka Ale Natiq also sided with Khurram Zaki, LUBP’s editor, in condemnation of Ilmana Fasih. Natiq put up a couple of messages on his Facebook wall about Ilmana. His wall quickly became a platform for an informed debate on Ilmana’s insult. Around the same time, a Facebook comment written by Hamza Ali Abbasi, an entertainer-cum-politician, began to make rounds. In the tweet, Abbasi expressed solidarity with the Rohingyas and claimed that there was no such a thing as the Shia genocide:

Some of the LUBP contributors protested Abbasi’s comment. To his credit, Abbasi in another comment clarified why he had not spoken about the Shia genocide. In the past, he had been threatened by the Taliban and the Sipah-e-Sahaba / Lashkar-e-Jhangvi: 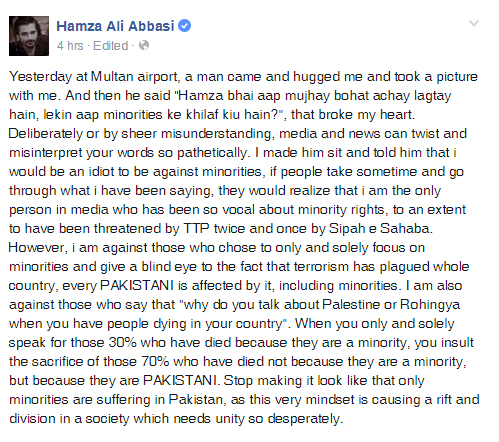 Everyone not only accepted Abbasi’s clarification but indeed sympathised with him.

But not Ale Natiq. The Nation published an article by Ale Natiq in which he denounced Hamza Ali Abbasi, for ignoring the Shia genocide in Pakistan:

There was no need to write the article because (i) Abbasi had clarified his position, and (ii) it tended to take people’s attention away from the extremely sinister turn that Ilmana’s and her associates’ responses were taking. Khurram Zaki and other LUBP contributors advised Ale Natiq to stay focused on the issue of Ilmana’s insult. He also told him that since the debate had mainly been carried on his Facebook wall, his own participation was vital.

Natiq responded by deleting the entire debate from his wall. It was his right to delete the debate from his wall. However, it was his friends’ right too to ask why he had done so. Thus, when an LUBP contributor asked him the question, he began to curse him. He went on to deleting Khurram Zaki, Ali Abbas Taj, Aamir Hussaini, myself and a few more from his friends’ list. He did not stop at that. He began to use the most offensive language about the LUBP team including its former editor Abdul Nishapuri and other contributors. He began sending out tweets and Facebook messages in which he threatened to “out” the people behind LUBP who were: one mullah, two doctors, and one soldier who had created two dozen fake profiles:

He also called the LUBP contributors a set of toilets:

These insults were followed by actually “outing” some LUBP contributors and their family members. Natiq also predicted that since he knew the “actual identity” of the LUBP contributors, they would soon close LUBP down for fear of being “outed” by him:

Not content with his offensive messages, Natiq became outright vulgar by abusing the LUBP contributors: 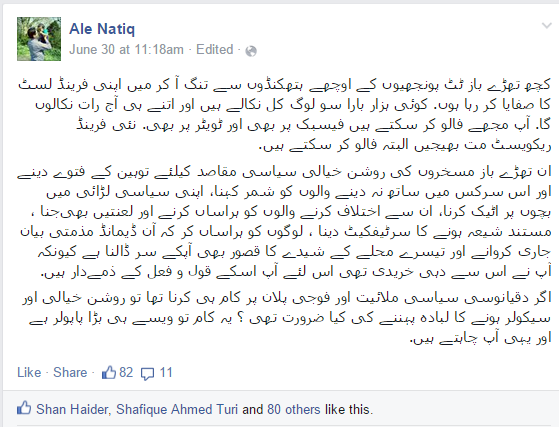 After that, a strange thing happened. A number of anonymous Twitter and Facebook accounts and blogs appeared where photos, addresses, workplaces, and contact details of real and imagined LUBP contributors and their relatives were made public. That included my details too. More surprisingly, Natiq was supported by self-professed atheist Ayaz Nizami. It is surprising that the likes of Ayaz Nizami who claim to be anti-religion and anti-Islam would be concerned about sectarianism in Pakistan, campaigning against LUBP as a sectarian blog. In principle, they should say that sectarianism is the result of religion. They should, thus, be targeting religion, and not LUBP. 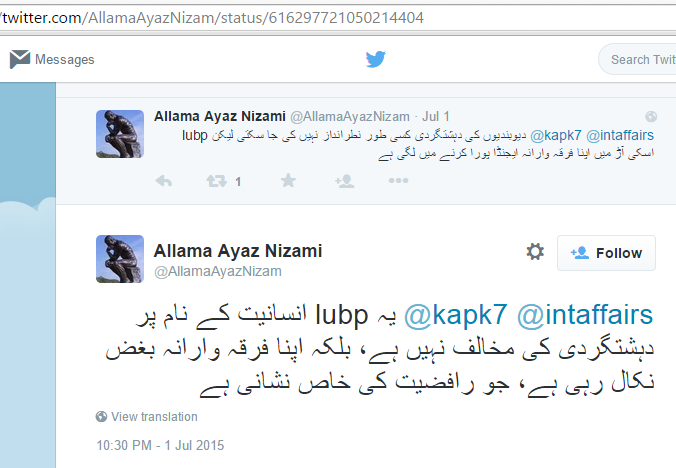 More curiously, Natiq, a Shia himself, began to tag Tahir Ashrafi who is virulently anti-Shia and a close friend of the arch Shia-hater Ahmed Ludhianvi (head of ASWJ, a banned terror outfit) and the notorious Shia-killer Malik Ishaq: 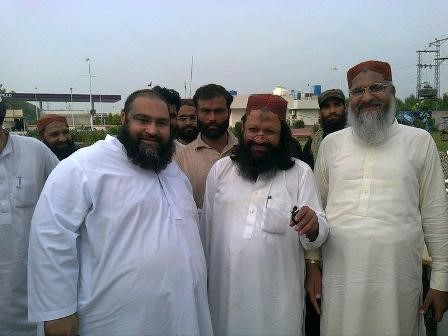 One of the anonymous accounts insulted Zahra Bokhari, a teenage human rights campaigner by calling her a mercenary working for money. Bokhari’s ‘crime’ was that she sympathised with those LUBP contributors whose identities had been made public (Read Aamir Hussaini’s response to Natiq with reference to his insult to Bokhari: https://lubpak.net/archives/339353)

Aamir Hussaini began to receive life-threatening telephonic calls after he was publicly threatened by an anonymous account: 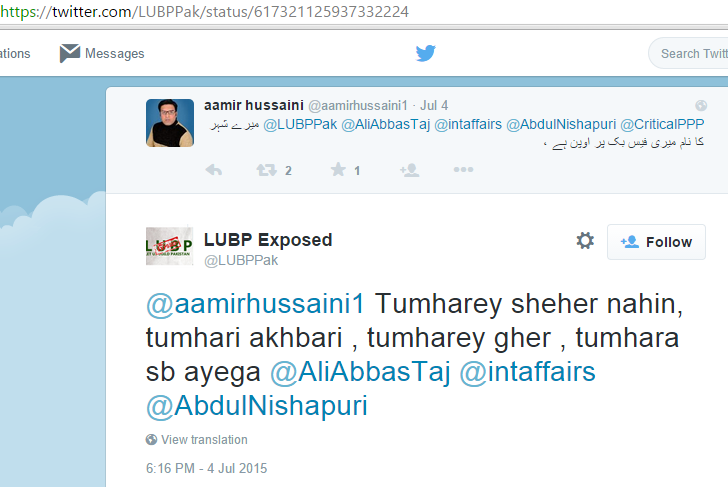 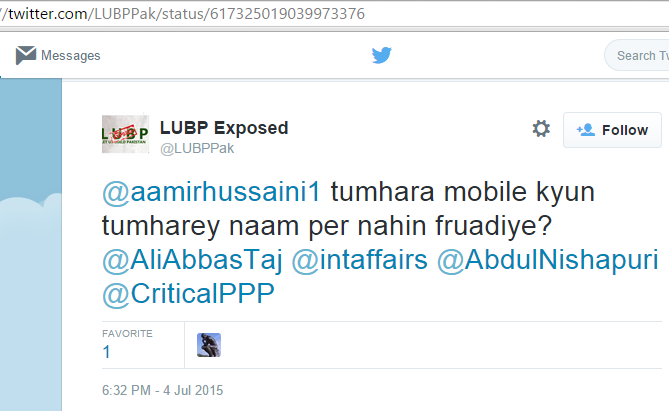 It appears, circumstantially, that it is Natiq who created those sudden and anonymous social media accounts. Even if he is not the one, it is he who began the campaign against LUBP and publicised some people’s identities. It was an open invitation to the likes of the Lashka-e-Jhangvi to kill the identified persons and their families. It is put on record here that if any harm comes to any of the people, or their relatives, directly or indirectly identified by Natiq, an FIR will be registered against Ale Natiq (Ali Mashadi) and anyone who has been his accomplice.

The entire affair is indicative of a sinister world where the atheists, assassins, hypocrites, and Islamofascists operate in complicity. They want to monopolise the national narrative from one end to the end. LUBP is the target because it has defied them and has wrested the narrative of the persecution of various minorities in Pakistan. LUBP has campaigned for all the minorities in Pakistan regardless of faith and ethnicity.  Sadly, what was supposed to be a principled exchange has mutated into a vendetta against LUBP.

Natiq is a liar when he says that the likes of me use fake identities to write. Whenever I have written for LUBP or any other publication, I have used my own name.

(Dr Abbas Zaidi has taught in various Australian universities. He can be contacted at: abbas.zaidi@unsw.edu.au)

Dr. Abbas Zaidi is the author of "Two and Half words and other stories" and "Language Shift". He is currently based in Sydney at the University of New South Wales. email: hellozaidi@gmail.com