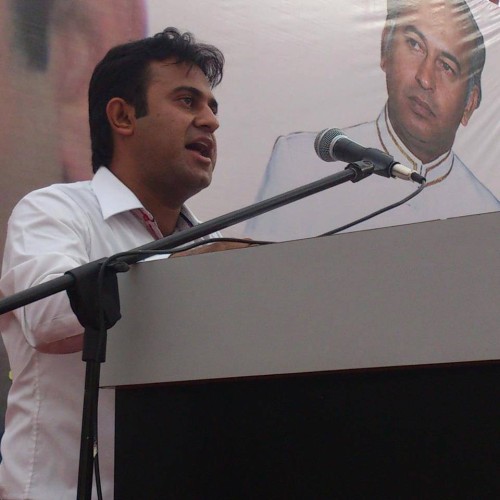 In a recent shared Facebook post, PPP activist Malik Zameer Hassan makes some egregious generalizations and leaps of logic on the complex situation in Yemen to justify the further involvement of Pakistan in what is clearly a Saudi and GCC violation of Yemen’s sovereignty.

Zameer Hassan starts with minimizing the Hanafi Zaidi population of Yemen from the generally accepted 40-50% of the total population to 35%.  He the proceeds to re-create the dishonest Iran vs Saudi binary and deliberately places 15-30% of that Saudi population that is Shia muslim in the cross hairs of the brutal Saudi security apparatus.

He also obfuscates this issue in the typically dishonest “Sunni vs Shia” binary which is not even applicable to the complex situation in Yemen.  The Zaidis are closer to Hanafi Islam than Isnashari (Twelver) Shiaism.  The second largest religious groups in Yemen are the Shafis. Hanafis and Shafis are traditionally both Sunni schools of thought that are Sufi inclined and therefore at odds with the harsh, literalist and intolerant Salafi cult that is promoted by Saudi Arabia and GCC worldwide.

Yemeni-British journalist, Abubakr Al-Shamahi exposes the hollowness and intellectual dishonesty of those misusing the Sunni vs Shia binary to misrepresent the complex situation in Bahrain

Zaydism (Zaydiyyah) is a school of thought within Shia Islam but is closer to Sunni Islam in many ways than the mainstram Isna Ashri Shias. Zaydism is named after Imam Zaydi Bin Ali, who was killed in an uprising against the Ummayyads. Although it was once found in places such as Iran and North Africa, Zaydis are now only found in significant numbers in Yemen. A Zaydi Imamate ruled many part of northern Yemen for 1000 years, up until the last Imam was overthrown in 1962. Traditionally, places like Sana’a, Dhamar, Hajja and Amran are Zaydi, and the heartland is Sa’dah. A common saying referring to the Zaydis is that they are “the Sunnis of the Shia, and the Shia of the Sunnis”, indicating that there is not a huge difference doctrinally between Zaydis and Sunnis (or at least it has been perceived that way).

Shafi’ism (Shafi’iyyah) is a school of thought within Sunni Islam. It is named after Imam al-Shafi’i, and is one of the four main schools of thought in Sunni Islam. Shafi’is are found across the Muslim world, such as Egypt, Syria, Indonesia and Somalia. In Yemen, Shafi’is predominate in all the areas not mentioned as being ‘traditionally’ Zaydi, and they are the majority particularly in the Soutern part of Yemen.

It is when discussing how Yemen is being used as a sanctuary by Al Qaeda, that Malik Zameer Hassan makes some of his most ludicrous assertions.

“And we should also keep in mind that the Militant Sunni groups have already carried out blatantly sectarian attacks. Yemen is home to al-Qaeda in the Arabian Peninsula (AQAP), al-Qaeda’s deadliest branch, and Islamic State (IS), which claimed responsibility for the suicide bombings of two Zaidi mosques in Sana’a on March 20th, which left more than 140 people dead. And it’s noway in the interest of Saudi Arabia to tolerate AQAP in Yemen.”

As per Malik Zameer’s logic, the Pakistan army must attack Hanafi Zaidis who are opposing Al Qaeda in their Yemeni homeland!

As per Malik’s logic, the Pakistan Army must support the same Saudi Arabia that is the God Father of the Salafi-Deobandi creed that provides the ideological inspiration to terrorist groups like Al-Qaeda, Daesh, ASWJ, Taliban and Boko Haram and whose Deobandi proxies like the interconnected ASWJ/Taliban/Jundullah/Jamaat ul Ahrar massacred 150 of our school children in Peshawar!

One only has to read Malik Zameer’s perverse leaps of logic to see how he makes a half-baked argument to justify that the Pakistan’s army which is fighting Al Qaeda in Pakistan should support Al Qaeda/ISIS/Saudi Arabia in Yemen!

His note draws a ridiculous analogy that the Pakistan army is compelled to fight the Houthis in Yemen because of the War on Terror rationale.  Once again, this means that Malik Zameer equates the Hanafi Zaydi nationalists in Yemen with ISIS-affiliated Deobandi groups in Pakistan.  Someone should inform Malik Zameer Hassan Awan that Yemen is not a province of Pakistan.

Following Malik Zameer’s line of  thought, since Saudi Arabia cannot afford the presence of Al Qaeda and ISIS in Yemen, therefore it is ok to bomb the Hanafi Zaidis who are the greatest obstacle to Al Qaeda. And who, unlike KSA have actually been opposing Al Qaeda.

Malik Zameer’s note Compares Hanafi Zaidis who are the victims of ISIS with their ISIS perpetrators.  and omits any mention of Saudi Arabia’s previous vicious and brutal campaigns of bombing Hanafi Zaidi Houthi freedom fighters.

This is a shameful post from a PPP activist as it goes even further than PML N in its slavish support of Saudi Arabia.  This note fails to mention that one or both of the previous Yemeni PMs were Saudi stooges – like Nawaz Sharif.   If Bilawal kicked out Faisal Raza Abidi for supporting the Pakistan Army’s fight against the Taliban in Pakistan, he should do the same against much lesser and politically irrelevant Malik Zameer for suggesting that the Pakistan Army should support Al Qaeda in Yemen

Malik Zameer Hassan wants the Pakistan Army to act in the tradition of General Zia ul Haq who was rented out to Jordan in a similar deal to massacre Palestianian in 1970.

When an alleged PPP activist writes such drivel, it is easy to understand the anguish of former jiyalas who see their party as a weak B-team for Saudi stooges like PML N.

While this time it is encouraging to see that the vast majority of Pakistan’s civil society and liberatti have protested and opposed any Pakistani involvement in Yemen, it is important to remember how some of them reacted to the situation in Bahrain. Similar to this propaganda piece, there were those closet sectarianists who did their best to reduce the pro-democracy protest movement in Bahrain in 2011 as an Iranian conspiracy.

The same sectarianists like Tarek Fatah who boast their “anti establishment” and “pro democracy” credentials were obliquely supporting the brutal crackdown of Bahrain indigenous pro-democracy activists by the Khalifa regime, Saudi army and Pakistani army mercenaries. 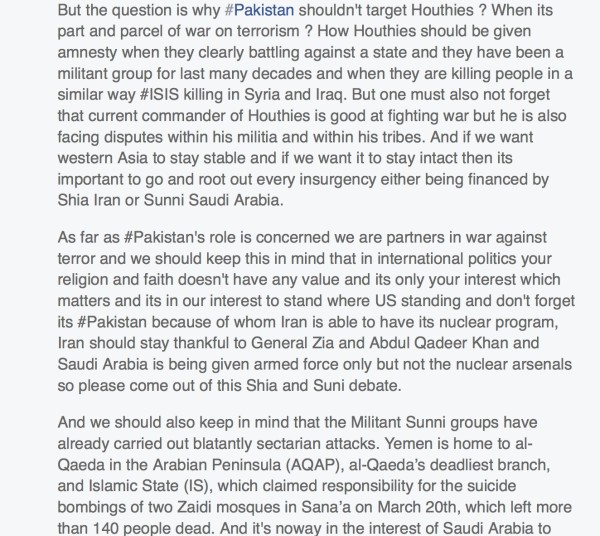