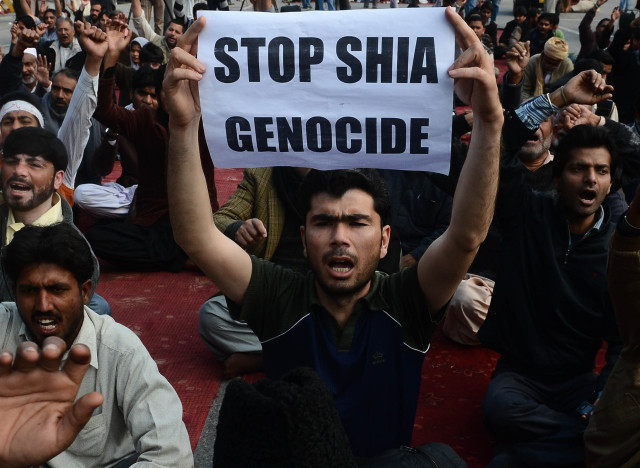 The following short documentary by France 24 blows a giant hole in the Intellectually Dishonest “Sunni vs Shia”/”Iran vs Saudi” binaries that you have been peddling to Obfuscate the one-sided violence of ISIS-backed, interconnected Deobandi groups (ASWJ/Taliban/Jundullah) against Sunnis, Shias, Christians and Ahmadis in Pakistan.

This Dishonest binary never really had any merit and would never have persisted had it not been for your prejudice-motivated and opportunist attempt to cash in on the misery of those facing a genocide and then to obfuscate the victims (Sunnis, Shias, Ahmadis and Christians) as being equal to their perpetrators (ISIS-backed Deobandi groups)

For that, Hajjaji sends you his Sufyani Salute, his Yazeedi salaam!

Now that your dishonest bullshit is unravelling, I request you to act immediately. Not to be contrite and start being truthful. NO!. I request you to come up with more lies. And say those lies with more Bombast – to drown out the bomb blasts of your ASWJ compadres killing Sunnis, Shias and Christians.

Keep saying that Pakistan is being overrun by Sipah Mohammad (SMP) – you know, an organization that has been defunct for nearly 20 years.

Just make sure that when you keep harping on about SMP being equal to the very visible ASWJ. Be careful that you never highlight that SMP, very briefly during 1993-95 , was selectively targeting only those Deobandi hate clerics who are now justifying the slaughter of nearly 150 Pakistani school children – children who happen to be mostly Sunni.

This should make SMP into heroes and we would not want that. Don’t worry about getting called out on your brazen lies and hypocrisy – Thomas Friedman has made a career out of half-truths, lies and hypocrisy at The New York Times.

Whatever you do, and I mean WHATEVER YOU DO, keep regurgitating the false, biased “Sunni vs Shia” binary that is also peddled by former ISI chief, General (r) Hamid Gul. You may oppose him on surface issues but deep down, the two of you are not very different.

Keep regurgitating this binary even if clearly does not even come close to approximating the facts:

Facts such as how ISIS-backed Deobandi groups like ASWJ/Taliban/JeM/Jundullah/Jamaat ul Ahraar, backed by the Deobandi madrassa network and supported by JUI F/JUI S/JI/PML N/PTI have brought you close to 70,000 death Pakistani civilians and soldiers nearly 50,000 of whom are Sunni muslims!

Continue to suck up to “anti-establishment” Faiz-reciting PMs and CMs like the Sharif Brothers – even as they make no pretences of being fully supportive of their Saudi Sugar Daddies and other spawned siblings like OBL, ASWJ, Al Qaeda and Taliban.

If there are any “dissidents” – don’t worry. Send them some “Rooh Afza” – Johnny Walker flavour only and give them an extra workshop at the next Karachi and Lahore Elitest Fashion Festival, oooops Literary Festival. All of us love to hear the sound of our own (slushed) voices and that should silence any contrarion opinion. If that does not work, you can always unleash Tahir Ashrafi and other ASWJ type “liberals/leftists” for blackmailing and harassment.

Because only by supporting the Taliban and its other Deobandi and Salafi auxiliaries like JeM and LeT/JuD can Nawaz Sharif really set up some shell companies, ooops, make peace with India.