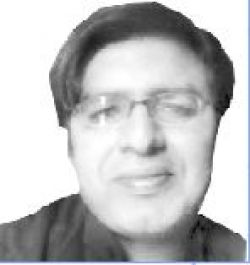 I was in Lahore last week when a friend informed me that the President of Pakistan Seraiki Party, Taj Muhammad Langah, had passed away. That was sad and very shocking news to me but I could not attend his namaz-e-janaza in Lahore where I had gone for my medical check-up.
I met Taj Muhammad Langah for the first time after a seminar held in Lahore on the Seraiki national question where I had raised many questions. When I wanted to speak about the national question in the context of Marxist philosophy, Taj Muhammad Langah stopped me from saying anything and said, ‘I am the teacher of many Marxists. Don’t teach me’.
I admit that my first interaction with Taj Langah was not very pleasant. Only later, after I studied his role in Pakistani politics and his honesty and commitment to principled politics came to my knowledge, that I felt much respect for him in my heart.
Taj Muhammad Langah was a young student in England where he was exposed to Marxian politics so popular at the time all over the world. After he returned home, he joined Shaikh Rasheed’s group and got involved in leftist politics and mass campaigning. He participated in the founding meeting of the Pakistan People’s Party and won the confidence of the founding chairman of the party, Zulfiqar Ali Bhutto. Later, in 1970, he contested election for the national assembly against former chief minister of Punjab, Mumtaz Dultana, and got a large number of votes but lost to Daultana due to an arrangement with Bhutto.
Taj Mohammed Langah was never given a party ticket again by the Pakistan People’s Party. He did not lose heart and continued working for the party. He refused an offer to join the Muslim League when Ghulam Mustafa Khar was chief organiser and Hanif Ramay was deputy chief organiser.
It was in 1974 when Bhutto opened the gates of the Party to feudal and capitalist classes that middle class candidates and those from the working classes had to give way to them. It was then that left-leaning members began leaving the party.  Khursheed Hasan Mir from Rawalpindi was the first senior and well known member to do so. He founded his own Awami Jamhori Party (People’s Democratic Party Pakistan) and invited Taj Langah to join him, which he did. Later, he was nominated the first deputy general secretary of the Awami Jamhoori Party.
When General Zia took over the country and sacked the government of Pakistan People’s Party, imprisoning Bhutto and after a two year trial hanging him, the Awami Jamhoori Party disbanded and most workers returned to the PPP. But Taj Muhammad Langah was not one of them. In that period, there was a circle of intellectuals, journalists, political workers, and writers which decided to establish a political front for Seraiki Identity and defend the national rights of Seraiki people. Taj Langah, along with Riaz Hashmi, an advocate, and others established the Seraiki Sobah Mahaz and helped bring the discrimination against southern Punjab and the question of a Seraiki province to the limelight.
During that period of military dictatorship, although Taj Muhammad Langah was not part of the Movement for the Restoration of Democracy, he never extended his support to General Zia and seconded the stance of the democratic alliance on dictatorship. In 1989,Taj Muhammad Langah, along with other comrades, founded the Pakistan Seraiki Party and from that day until his last breath, he played a crucial role in promoting the Seraiki cause in the region.
His entire life was devoted to the Seraiki cause. He was a democratic and non violent politician and never guided his party members and supporters toward militancy. Although I have many reservations on his puritanical position and nationalist ideas on the question of sub-nationalities and the Seraiki province (since I always linked the national question to the class question), I admit that I learnt a lot about the issue from him.
During General Musharaf’s dictatorship, his party joined the Alliance for the Restoration of Democracy (ARD). He and his party workers were never tempted to join the APDM which was a ploy to disintegrate the democratic resistance and in this way they saved themselves from falling into the well of darkness.
He was a regular reader of my columns published in daily Khabarain from Multan, and encouraged me a lot. I met him at the residence of a friend where a reception had been organised for a member of the Scottish parliament. Taj Langah seemed very hopeful of the turn of events and the issue of southern Punjab. He was expecting the approval of the bill for the new province in the National Assembly but I had expressed my reservations and my suspicion about the intentions of the leaders of the PPP.
The last time I saw him was at a sit-in at Nawan Shehar Square in Multan where he made an emotional and very radical speech. He warned those political and other forces who were opposing the Seraiki soobah and asked the youth to launch a movement for direct action. But later, he revived his non-violent tone and rejected militancy.
Taj Muhammad Langah was a great nationalist activist who served the people of the Seraiki region to his last breath. He never changed his line or his tactics to benefit himself or his party, thus resisting the opportunism that was introduced by General Zia ul Haq to politics. He remained a principled politician who always spent money and did not make money through politics. His home was reserved for party activities and was a second home to the party workers.
I would like to end by saying that Taj Muhammad Langah was a very important chapter in the politics of Pakistan and that chapter has now been closed.

Yemen massacre of Zaidi Shias by the Salafi Al-Qaeda: It’s not ISIL and it’s not Sunni-Shiite Conflict – Juan Cole
Deobandi extremists in the UK – Yasmin Alibhai-Brown