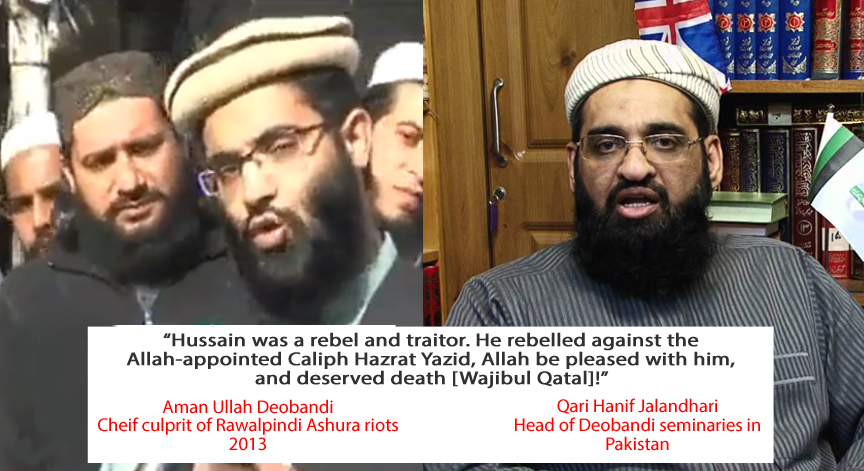 “Hussain was a rebel and traitor. He rebelled against the Allah-appointed Caliph Hazrat Yazid, Allah be pleased with him, and deserved death [Wajibul Qatal]!”

These were the very words which the head of the Raja Bazaar Deobandi seminary uttered in his Friday sermon just when the Ashura procession was passing by it on 15 November 2013. When the Shia mourners protested, the Deobandi shooters fired from the seminary killing nine Shias on the spot.

For anyone who believes in social justice—Shia, Sunni or a non-Muslim—such a description of Imam Hussain is ultimate sacrilege and absolutely unforgivable. The man who described Imam Hussain in such insulting, inhuman terms will be shunned at all costs.

The man who insulted Imam Hussain is no other than Qari Hanif Jallundhari who is also the president of the Deobandi seminaries, Wafaqul Madaris Arabia, in Pakistan.

The other day—on 14 March— Jallundhari was invited by Allama Niaz Hussain, the head of Wafaqul Madaris Shia, to Jamia Al Muntazir, Pakistan’s foremost Shia seminary located in Lahore. Both Jallundhari and Naqvi are members of Ittehad Tanzeemat Madaris Deenia (ITMD) which wants the government not to probe the seminaries for their role in terrorism. At the end of the meeting in Jamia Al Muntazir, Jallundhari and Naqvi along with other Deobandi mullahs demanded the government hold talks with the ITMD instead of taking any action against the seminaries.

The Jamia Al Muntazir meeting is a clear proof of hypocrisy and moral bankruptcy of Shia leaders like Naqvi who are too quick to condemn Shia killings, but are equally quick to make alliances with the Shia haters and Shia killers. These Shia leaders enjoy privileged lives and live off donations of the Shias, but will do nothing to protect Shia lives and defend the Shia faith. Jallundhari is not a hypocrite because he openly apostatizes the Shias and insults Imam Hussain and Imam Ali. But the likes of Naqvi are far worse than Jallundhari because they deliberately obfuscate the Shia genocide and honor Shia killers. You cannot blame someone for being your enemy and honor them as your guest at the same time. By accepting and welcoming Jallundhari as an Islamic scholar, Naqvi, the Shia leader, has given him and his views legitimacy. Next time he apostatizes the Shias and insults the Shia Imams, how can anyone criticize him?

We are too quick to condemn the Deobandis and the likes of SSP/ASWJ whenever they kill or apostatize the Shias. Shias, Sufi Sunnis and even non-Muslims have done good work at LUBP in defense of all the non-Deobandi communities in Pakistan. But the likes of Naqvi undermine this good work in just one stroke by imparting legitimacy to Islamofascists like Jallundhari. Such a shame!