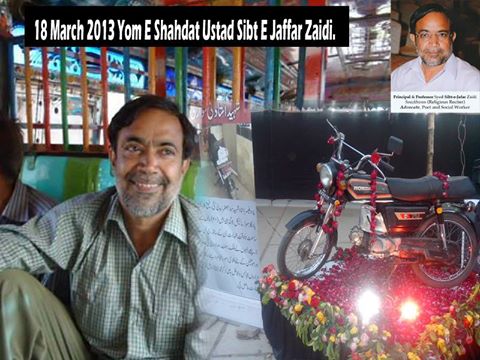 This is Sibte Jaffar – a Shia Rafdi “terrorist” who terrorised the country with his musical renditions of poetry.

He is part of Pakistan’s majority Sunni and Shia communities who use and advance poetry and music for a more humane understanding of interfaith relations.

This is an affront to Puritan Deobandi traditions – which like Salafism – does not appreciate culture and music and poetry and the remembrance of the Holy Prophet and Sufi saints.

UNLESS of course the remembrance has to do with worshipping Caliphs like Yazeed Bin Muawiya and making out with images and pictures of dead terrorists like Osama Bin Laden. Or worshipping the graves of dead Lal Masjid terrorists who did not have enough time to put on a burqa to escape. Or reciting rhyme-less and rhythm-less poetry boasting how Deobandi terror groups cowardly massacred 100 Shias.

For getting multiple college and university degrees, setting up schools in poor areas to benefit both Muslims and Hindus in interior Sindh and for composing and reciting poetry in the form of eulogies for the Holy Prophet and his family, Professor Sibte Jaffar was killed by the Deobandi ASWJ-LeJ in 2013.

On Twitter, the Puritan ASWJ-LeJ handle – who routinely obsesses about God’s domain – consigned Sibte Jaffar to Hell. This is immediately after their gunmen killed him in typical cowardly Sahaba style; i.e. attacking unarmed people like in the Golden Age of Self Righteousness.