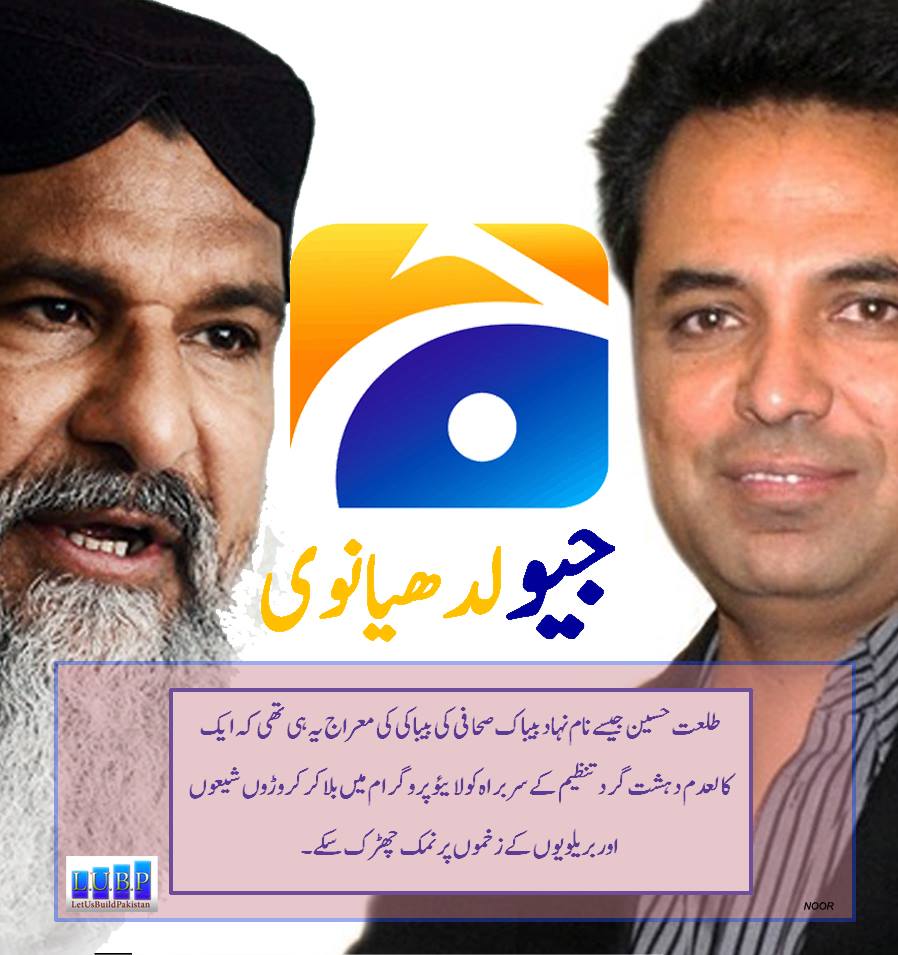 22nd February 2015 a dark and shameful day in Pakistani media history when a pro-Taliban TV network (Geo TV) aired an interview of patron-in-chief of a banned , Deobandi takfiri terrorist organization ASWJ, The interview was conducted by ill-informed anchor journalist Talat Hussain who either lacked accurate information about the banned status of Deobandi sect in Pakistan or blatantly violated the law.

On behalf of Sunni Muslims of Pakistan,we stronglyy condemn Geo Television network and its anchor Talat Hussain on violating rules of PEMRA and ethics of journalism; we ask PEMRA to take notice of this clear violation.

Mr Talat Hussain during discussion with Takfiri cleric nominated in many cases of terrorism and hate speech called ASWJ as representative of Sunni school of thought in Pakistan, which is totally false and thus tried to misguide public about real status of Deobandi and ASWJ. In Pakistan Deobandi school of thought is not representative of majority of Sunnis but Deobandi sect represents only 10-15 % of total Muslim Population in Pakistan and ASWJ aka Spiah Sahabah Pakistan is not Sunni organization but a Deobandi takfiri , Kharijite terrorist organization having no links with Sunnis of Pakistan.

In Pakistan We Sunnis often called Sunni Barelvis or Sufi Sunnis are majority of Muslim population of Pakistan and we never accepted claim of ASWJ as a Sunni organization .Our stance on ASWJ is very clear that ASWJ is Deobandi organization which follows takfiri , khariji line and mother of all takfiri terrorists organizations from misguided Deobandi sect and follower of Imam _ ul – takfiris -wal – Khawarij in Indian subcontinent Shah Ismael Dehlvi , Which was excluded with consenus of Sunni religious scholars and Muftis of his age from ranks of Ahlesunnah due to its Takfir of majority Sunni Muslims and its Wahhabi , Kharji ideas borrowed from Muhammad bin Abdulwahab najdi and Shiekh Ibn-e-Tamiyyah.

Second thing is that all Sunni clerics of Subcontinent and Arab seconded fatwas of Shah Ahmad Raza Khan Barelvi on books of founding fathers of Deobadi sect from founding father of seminary Daruloom Deoband due to blasphemous material and paragraphs about Allah Almighty , Prophet صلی اللہ علیہ وآلہ وسلم , Sahabah R.A , Ahlebait A.S and Sufis , saints of Islam . Deobandi sect remained minority sect like so called Ahlehadees in Indian subcontinent and still has minority status in Pakistan , India and Bangladesh and Sufi Sunnis who remained majority and still are majority not only in subcontinent but all over Muslim world eexcept in Iran. In Saudia arab they (Sunnis ) are in majority but due occupation of Alsaud and Wahhabi clergy on all state instituions and bar on them they perform their famous sufi paractices in walls of their houses .

Muslim majority in Muslim world rejected and rejects their takfiri and Kharji ideology always therefore they are driving terrorists fascist networks which want to impose their takfiri Wahhabi Kharji ideas and unpopular so called Islamism through suicide bombings , attacks on Mosques , Shrines and killing but genocide of common innocent Sunnis and other non Deobandi Wahhabi sects .

During that shamefull interview takfiri terrorist Mullah Ahmad Ludhyanvi called those culpirts terrorists miserable , poor and emtional youth who are involved in killing of more than 45000 Sunnis , 22000 Shias and near about 4000 soliders and officers of Pakistan and many persons of Police , FC and intelligence agencies and many political workers and leaders including former Prime Minister Benazir Bhutto and gave justification of their berberism and cruelty which proves his sympathy for all such sectarian killers and terrorism .

Mr Ahmad ludhayanvi distorted history while calling himself follower of Quaid Azam Muhammad Ali Jinnah but history tells us that all Deobandi clergy and leadership opposed Mr Jinnah while calling him non Muslim , Shia and issued fatwas of Kufar against him and other leadership of All India Muslim League and even called Shabir Usmani Kafir when he broke his relation with Deobandi big leadership like Hussain Ahmad Madni and ousted him from Darluloom deoband India.

We demand rulers of Pakistan for complete and real ban on all sectarian , takfiri , extremist and terrorists organizations like ASWJ . There should be real ban on projecting leaders of takfiris like Ahmad Ludhiyanvi , Ourang Zaib Faruqi , Molvi Abdulaziz and others through print and electronic media.

There should be complete ban on meetings of officials of state with such takfiris .
Government should release and public list of banned organizations and implement really that ban.

Geo media network is actually doing dirty journalism and fuelling takfiri ideas and distorting image of Sunnis , it should shun such cheap and hate method to score points against Pakistan Army and its war against terrorism .

We feel that PEMRA is not performing its duty honestly and have become non functional due to pressure of Takfiri lobby in state institutions and current Government inclination toward takfiris .

If it remains silence on such violations of rules and regulations devised for T.V channels then we Sunnis will be force to give call of protest against it all over Pakistan.

We are observing full projection of banned organization ASwJ by certain sections of Media and full protection of Federal and provincial governments extended to ASWJ against wishes of masses of Pakistan.

We are forced to ask Chief of Army Staff to play his role and ask Government to quit paronage ASWJ.