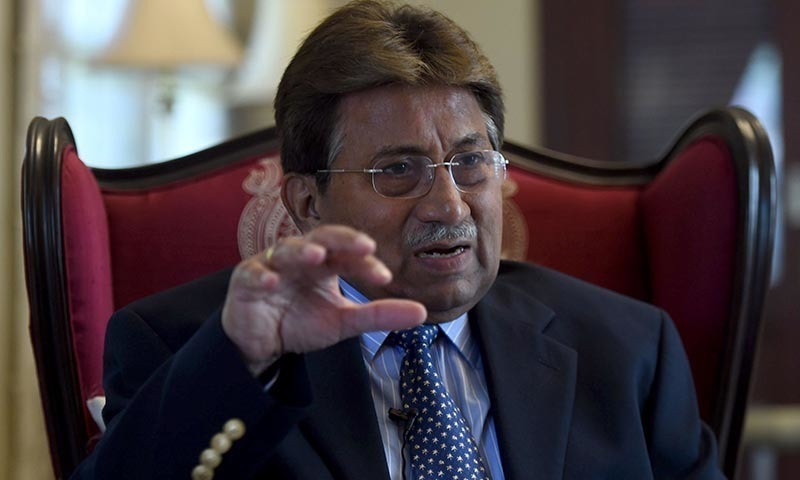 Former military ruler Gen (retd) Pervez Musharraf has called for an end to militant proxies in neighbouring Afghanistan, said a report published on The Guardian.

In the interview, Musharraf admitted that during his tenure as the head of state, Pakistan had tried to undermine the government of former Afghan president Hamid Karzai because Karzai had helped “India stab Pakistan in the back”.

However, the former army chief was of the view that the time had come to fully cooperate with Afghan President Ashraf Ghani Ahmadzai who he believed was the last hope for peace in the region.

“In President Karzai’s times, yes, indeed, he was damaging Pakistan and therefore we were working against his interest. Obviously we had to protect our own interest,” Musharraf said.

“But now President Ashraf Ghani has come and he is trying to restore balance in Afghanistan. We must totally cooperate with him.”

During his first few months in office, the Afghan president has sought to improve ties with Pakistan. Ghani not only called off a weapons deal with India, but also sent troops to fight against anti-Pakistan militant groups in eastern Afghanistan. The arrival of six Afghan army cadets in Pakistan for training in a sign of increased cooperation was the most welcome development for Musharraf.

Pakistan first offered to train Afghan forces back in 2010, but then Afghan president Hamid Karzai had dismissed the offer as a non-starter till Pakistan rebuilt confidence by addressing Kabul’s concerns about its involvement with militants. Instead, Karzai sent cadets to India, where the retired army general believes they were “indoctrinated” against Pakistan.

Musharraf made repeated allusions at what is now widely accepted among diplomats and analysts: that the nominal western ally assisted both Nato forces in Afghanistan and the Taliban they were fighting against in a bid to counter the perceived influence of India.

“Pakistan had its own proxies, India had its proxies, which is unhealthy. I do admit this, it is most unhealthy. It is not in favour of Afghanistan, or Pakistan or India. It must stop,” he said.

The former army chief said spies in Pakistan’s Inter Services Intelligence (ISI) had given birth to the Taliban after 2001 because the government of Ghani’s predecessor had an overwhelming number of non-Pashtuns and officials who were said to favour India.

“Obviously we were looking for some groups to counter this Indian action against Pakistan,” he said. “That is where the intelligence work comes in. Intelligence being in contact with Taliban groups. Definitely they were in contact, and they should be.”

Pakistan’s powerful military remains deeply wary of India. The two countries have fought three wars and came close to a fourth in 2001. The Himalayan region of Kashmir has been a bone of contention between India and Pakistan since independence in 1947.

Insisting that he does not loathe India, Musharraf, however, expressed his bitterness over what he called western bias towards Pakistan’s arch rival.

“India is the greatest democracy, promoter of human rights and democratic culture’? All bullshit,” he said. “There is no human rights. The religion itself is anti-human rights. In the rural areas, if even the shadow of an untouchable goes on a pandit, that man can be killed.”

Undeterred in his stance that India, through its Research and Analysis Wing (RAW), supports terrorists in Balochistan and tribal areas to vanquish Pakistan, the former president said: “The RAW of India, the ISI of Pakistan have always been fighting against each other since our independence. That is how it continued, it continues now also…It must stop, but it can only stop when leaderships on both sides show the will to resolve disputes and stop confrontation in favour of compromise and accommodation.”

The former army strongman came back to Pakistan in March 2013 after four years of self-imposed exile to run in the May general election, vowing to “save” the country from Taliban violence and economic ruin.

But he was barred from running in the election, and was then put under house arrest and hit with numerous criminal cases — including treason, the first former army chief to face the charge.

Despite the setbacks, he said he has no regrets about returning and says that he has the army to thank. “I’m very proud of my institution. Whatever they are doing to help me, to protect the honour and dignity of their ex-chief, I’m proud of that,” he said.