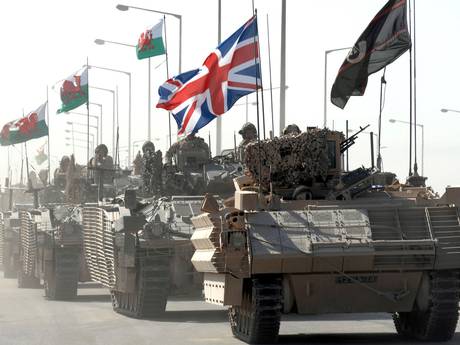 The traumatic experience of Britain’s participation in the 2003 Iraq war led the Government to have as little to do with the country as possible. By the spring of 2014, as the Islamic State of Iraq and the Levant (Isis) prepared its great offensive that would capture a third of Iraq, the political section of the British embassy in Baghdad consisted of just three junior diplomats on short-term deployment. The British consulate in Basra, the city that had been the base for UK military operation between 2003 and 2007 and is the centre of Iraq’s oil industry, had been closed in 2011. Amazingly, Iraq was apparently a low priority for British intelligence at a moment when it was becoming obvious that much of the country was being taken over by the world’s most violent terrorist movement.

These facts all come from the well-informed report by the House of Commons Defence Committee published last week which should be read by anybody seriously interested in Britain’s role in the war now raging in Iraq and Syria. It turns out that, for all the British Government’s bombast about fighting Isis, it has not bothered to develop a political and military policy towards it. This would, in any case, be difficult to do because Government has denied itself the means of knowing what is happening in Iraq. The committee reports that even in December 2014, “despite the UK’s long involvement in Iraq, there were no UK personnel on the ground with deep expertise in the tribes, or politics of Iraq, or a deep understanding of the Shia militia, who are doing much of the fighting”.

Here, in one of the most dangerous places on earth, Britain has once again become militarily involved – if only to the extent of launching one air strike a day – without knowing what it wants to do. The report says: “The committee was shocked by the inability or unwillingness of any of the service chiefs to provide a clear, and articulate statement of the UK’s objectives or strategic plan in Iraq. There was a lack of clarity over who owns the policy – and indeed whether or not such a policy exists.”

The service chiefs in question responded to queries about what they thought they were up to in Iraq with some splendid pieces of waffle and mandarin-speak. Asked who was responsible for determining future British actions, Air Chief Marshal Sir Andrew Pulford, said: “Well, the answer is that there are probably about 20 different players who own different elements of the comprehensive approach that needs to be applied in Iraq, in Syria and right around the region, because of the multifaceted and multi-natured nature [sic] of the ultimate solution, and all the moving parts that need to go into place.”

Such stuff is impossible to parody. Of course, there is a simple and humiliating answer to the question about who determines policy: the US. The report states baldly: “Many questions of the ‘mission’, or strategy, appear to have been left either in a vacuum between government departments or left to the international coalition (which appears to mean the US). We saw no evidence of the UK Government as a whole seeking to analyse, question, or change the coalition strategy, to which it is committed.”

Even supine support for US policy may not bring solutions. Speaking before the US Senate Armed Services Committee in January, retired US General James Mattis said that in the war against Isis, the US has a “strategy-free” stance. At one and the same time it is seeking to weaken and eliminate Isis, but is also trying to overthrow President Bashar al-Assad whose army is the main military opponent of Isis. The US’s supposed aim is to install moderate rebels instead of Isis and Assad, but these barely exist outside a few pockets.

At senior levels, US leaders probably do perceive their dilemma in combating Isis while heading an alliance that excludes most of those fighting it on the ground but includes those who helped to foster the self-declared caliphate. What the US really thinks about the rise of Isis and al-Qaeda-type organisations was revealed with undiplomatic frankness by Vice-President Joe Biden at a small meeting at Harvard University last October. Biden’s words are now almost forgotten, but they undoubtedly reflect many America leaders’ real take on the situation. He said that Saudi Arabia, UAE and Turkey “were so determined to take down Assad and essentially have a proxy Sunni-Shia war. What did they do? They poured hundreds of millions of dollars and tens of thousands of tons of weapons into anyone who would fight against Assad, except that the people who were being supplied were al-Nusra and al-Qaeda and the extremist elements of jihadis coming from other parts of the world.”

Isis, under pressure in Iraq, rebuilt its strength by joining the Syrian revolt. As for the famous “moderates” who are going to oppose Isis and Assad, Biden said that “there was no moderate middle because the moderate middle are made up of shopkeepers, not soldiers”. Not surprisingly, when I asked an Iraqi friend last week what Britain could do to help the Iraqi government, he replied only half-jokingly: “Bomb Saudi Arabia!”

Britain is a minor player in the war in Iraq, but as the Jordanians discovered to their horror last week, a minor player may become a major target. Probably that was one message Isis was sending by the ritual murder of the Jordanian pilot. But, going by the report of Defence Committee, nobody in the British political and military establishment has much idea of what is going on in Iraq and Syria or elsewhere in the region. The Defence Committee report has various suggestions about aid for the anti-Isis governments in Baghdad and Irbil, the Kurdish capital, which would not cost much out of a £38bn defence budget. But the most important part of the report is the demand for Britain to develop the ability to assess independently the real situation on the ground by having “specialists posted immediately to Iraq to focus separately on the Sunni communities, the Iraqi security forces, the Peshmerga, the Shia militia and Daesh [the Arabic acronym for Isis]”.

Britain remains obsessed with the Iraq war of 2003 and the finer points of what happened then, which may (or may not) be elucidated by the Chilcot inquiry. But this focus on what happened more than a decade ago has served as diversion or smoke screen to hide more recent but culpable actions by British political leaders such as David Cameron’s role in overthrowing Muammar Gaddafi as leader of Libya in 2011 or seeking to displace Assad in the years since – both actions much to the benefit of al-Qaeda-type groups.

“Political and strategic preparations must go hand in hand,” Sir Eyre Crowe, a famed foreign office mandarin, wrote before the First World War. “Failure of such harmony must lead either to military disaster or political retreat.” At the very least, it will produce some nasty surprises.