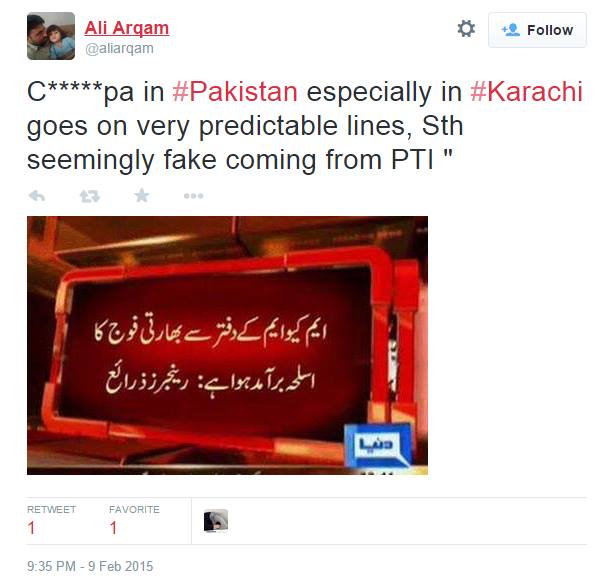 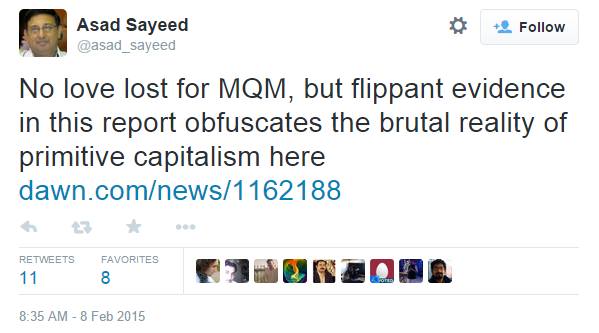 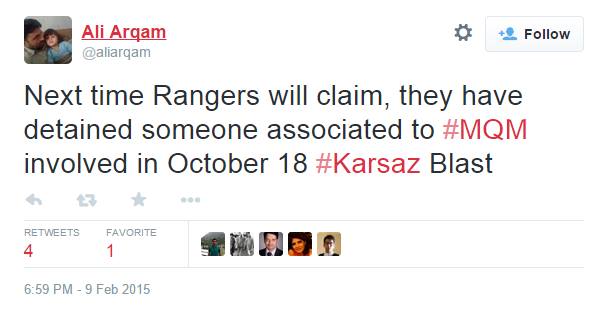 LUBP’s note: The tweets and the column suggests that there are politically motivated cases in Karachi. It would appear that the security establishment is trying to deflect attention from ASWJ takfiri khwarij to MQM? The timing and sequence of such allegations against MQM and its media trial seems to take focus away from the Arrest Aurangzeb Farooqi movement and the Ban ASWJ movement by the civil society and the Sunni Sufi and Shia activists. Apparently the security establishment is building pressure on MQM in order to force it to soften its stance towards takfiri TTP-ASWJ khawarij some of whom are treated as valued assets by certain sections of the establishment. That’s where the current article doesn’t provide a clear conclusion. We need to calrify that whille the author (Ali Arqam) has correctly critiqued government/army’s lopsided and unfair campaign against MQM, the article should have more clearly mentioned that the real agenda is to deflect attention from takfiri Deobandi terroists of ASWJ led by Aurangzeb Faarooqi.

Muttahida Qaumi Movement (MQM) is once again in the eye of the storm for a row of controversies around its alleged involvement in some of the major incidents of violence, including the fire at Ali Enterprises, a garment factory in Baldia Town in September 2012. It was termed as the worst industrial ‘accident’ due to the high death toll and huge monetary losses.
Last week, during the Baldia factory fire trial, additional attorney general filed a report of Joint Investigation Team (JIT) forwarded by the Rangers, in which an MQM activist Rizwan Qureshi held for illegal possession of arms had, during investigations, referred to the incident as an act of arson by some of the MQM officials. He had linked it to demands of extortion money and the arson as punishment to the factory owners as they had failed to meet their demand.

The initial coverage by the media and the debate following the report produced in the court by Pakistan Rangers had given rise to a misunderstanding that the JIT was set to probe the Fire incident. With the name of Pakistan Rangers, a major player in the ongoing Law Enforcement Agencies (LEAs) operation in Karachi, and due to the tainted image of MQM in recent years, these charges came with an outburst against it over the electronic media and social networking sites, leading to a verbal spat between them and PTI leadership and workers.
These accusations were not made for the first time. Soon after the incident, when MQM was on the forefront of relief work and in raising demands of compensation for the bereaved families, Jamaat-i-Islami Pakistan and People’s Aman Committee (PAC) were blaming MQM for the tragic deaths, linking the fire to their demands of extortion. Owners of the factory too had claimed then that it was an act of some miscreants. But these accusations were seen with skepticism due to the politically charged environment of the city and its long history of rivalries as well as the owners’ attempt to evade any responsibility for the incident.

An initial investigation by the DIG CID Manzoor Mughal had ruled out the possibility of an act by miscreants or a link with any demands of extortion.
The recent claims in the JIT report are questionable, considering the recent conflict between the MQM and LEAs, especially during the one and a half year long operation in Karachi.
A judicial probe of the incident by a tribunal led by Justice Zahid Qurban Alavi and the ensuing report has not been public up until now, and has been partially leaked to the media. It talks of violation of rules in the setting up of factory and approving the building, lack of safety standards and no emergency exits. Some leaked parts suggest that the report established short circuiting as the cause of fire. But the truth is that the exact cause of fire could not have been established because of lack of forensic facilities in the country.
The then Prime Minister Yousuf Raza Gilani is said to have played some role in getting criminal charges against the owners withdrawn. In this he faced opposition from the political parties including his own party, the PPP, that staged a walkout from the parliament after the news was reported. Then President Zardari and Governor Sindh are reported to have directed the LEAs not to withdraw the charges. But at a later stage these charges were withdrawn by the police, citing lack of evidence as the reason behind it.

The recent claims in the JIT report are questionable, considering the recent conflict between the MQM and LEAs, especially during the one and a half year long operation in Karachi. Rangers’ raids on party offices, targeted operations in areas of MQM support base, and detention of party workers and sympathisers were faced with criticism. Complaints of high-handedness, false charges against workers and extra-judicial killings were made, often leading to protests, strike calls and days of mourning.
In the ongoing operation, LEAs have made different charges against the MQM as discovering a huge cache of Indian weapons from their offices, detaining persons accused of involvement in criminal activities as target killings, extortion demands, kidnappings for ransoms and sectarian killings.
Many of these criminal charges against persons associated with MQM cannot be brushed aside as the party is said to have the most organised networks for collecting extortion money from the industrial sectors to small business and retailer shops.
Small and medium enterprise owners have admitted they have to pay to the MQM on a monthly basis and on special occasions as big parties events and Eid festivals.
“MQM workers from nearby units visit the factories and collect the money. It is part of our expenditures for more than a decade of my working experience here at SITE. I use to call them in beginning of the month and on occasions like Eid to collect Fitrana and sacrificial animal hide to be in their good books,” a small business enterprise owner said.
Yet, it’s the amount of money in the case of Baldia factory that raises doubts about the involvement of MQM. “Demanding such a huge amount in a single call seems unlikely. It is only possible when they are negotiating or have a strong opinion against the owners, but the owners of Ali Enterprises were on good terms with the party, which makes the demand astounding,” a police official said

Also MQM’s ability to inflict violence over the political rivals and opponents is widely reported. In many such incidents, furious remarks from the MQM lawmakers against ANP, their political rivals just minutes after the killing of MQM lawmaker Raza Haider in August 2010, had the city closed down and devastated for a whole week resulting in deaths of 195 people and torching of dozens of vehicles.
Some owners of mini-buses as well as rickshaws and taxis have talked about highly inflammable chemicals used in torching vehicles during the violence that erupted after MQM’s calls of protests and shutdowns.
Amidst accusations of workers detentions and extrajudicial killings levelled against LEAs, the LEAs have come with a fresh row of accusations against the party. Officials of Sindh Police claim that an MQM worker has confessed that he had killed Professor Sibte Jafer, an academic and Shia scholar. Another MQM activist, a State Bank employee of Grade 18 is arrested for his alleged role in May 12, 2007 violence.
This is contrary to the LEAs’ claim in 2013 that Lashkar-e-Jhangvi Karachi chief Tariq Shafi Ansari, a former policeman, was arrested and he had among other confessions admitted to killing Professor Sibte Jafer and MQM member Sindh Assembly (PS-94 Orangi Town), Syed Raza Haider with the help of his accomplices.
MQM lawmaker Faisal Sabzwari disapproving the finding of the report referred to a similar JIT report in the past, alleging that senior leader Haider Abbas Rizvi was involved in Karachi Ashura bombing in 2009.
Apart from PTI, the ruling parties at the centre and Sindh, PML-N and PPP, have come up with interesting responses over the report. PPP’s response has been mixed and contradictory.

Senator Saeed Ghani and Senator Maula Baksh Chandio had raised suspicion over the veracity and timing of the JIT report. Talking to Hamid Mir in his talk show, Chandio referred to charges against him in another JIT report, accusing him of involvement in a blast at Hyderabad in early 1990s.
On the contrary, PPP’s provincial minister Sharjeel Memon and opposition leader in National Assembly Khursheed Shah supported the findings of JIT. Some political observers have linked it to the recent understanding between PPP and MQM over seat adjustment in the upcoming Senate elections and bringing them back in the Sindh government. It is interesting to note that at the time of incident, MQM and PPP were coalition partners and had agreed on a local government plan, Sindh Peoples Local Government Ordinance (SPLGO), irrespective of the criticism and protest by the Sindhi Nationalist Parties.
Khursheed Shah has not stopped at approving the JIT finding; he went a step further by supporting the demand for recommending the case to military courts. Ahsan Iqbal and other representatives of PML-N too have proposed the same.
The alleged involvement of MQM in the fire incident and demanding the case to be recommended to military courts is in accordance with the demands by some quarters of broadening the scope of military courts beyond the acts of terrorism. It seems that those vying for this case to be sent to the military courts are setting the path while the others are falling for it in the game of political expediency.