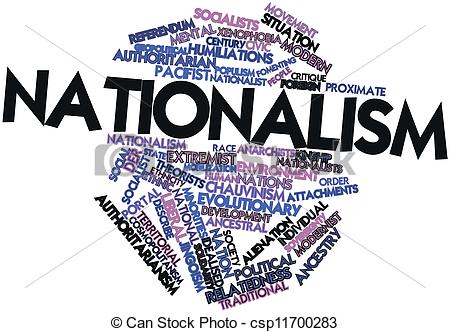 (Just now a friend asked for my views on Nationalism and here is my impromptu response. Your views?)

MY VIEW: I don’t think Nationalism’s positive side outweighs its negative side. I think it is the other way round.

EXPLANATION: At the level of a country, patriotism is a better emotion than nationalism. However, nationalism is an emotion that can attach itself to any group or class. It can be an instrument of inspiring positive loyalty or negative ‘otherisation’ for a group’s persecution.
How are Patriotism or Cultural Pride different from Nationalism, you may ask. Well they are very different in that, unlike nationalism, they do not force one to lose one’s individuality to the group. Diversity is cherished and generalization is looked down upon.

Nationalism can be a force of good but, unfortunately, is often not. It is good as a means to unite and uplift downtrodden groups but it turns into evil when it becomes a tool for hegemony.

The problem with nationalism (like religion) is that it generalizes human beings like generic or genetic products with whole swathes of millions categorized as, for example, either good or bad, brave or cowardly, generous or miserly, intelligent or dumb or so on. This at the level of ethnicity or race becomes even a bigger problem than at the level of religion because genes, unlike religious beliefs, are indissoluble. Therefore, you will see that throughout the history the pogroms perpetrated in the name of race have been far crueler than barbarity in the name of religion. {Holocaust, if that should spring to your mind, was a mixture of both.} See how Pakistan Army had no qualms about mowing down Bengalis but never fires upon Punjabis (and vice versa too). What would you blame an ordinary soldier’s spontaneous action on if not on nationalistic feelings?
However, as I said above, the greatest acts of barbarity have occurred when both nationalities and religions were different – Turks versus Armenians, for instance.
Nationalism is capable of instigating hatred and cruelty that are a lot more savage than what even the religion can command. Why? Because it is a more potent tool to identify, generalize, and ‘otherise’.
That’s why nationalism is a lot more effective than even religion in identifying oneself with a group and considering that identity as beyond good and evil in the duty to advance the group’s interests. History has shown that, in the longer run, nationalism is inseparable from the desire for dominance.

Nationalism like religion has the tendency of not seeing similarities between similar sets of facts. Baluchs, for example, support the creation of Seraiki or Hindko provinces but are loathe to ceding a Pashtun (or Pakhtun) province in a land where they are a clear minority. The same can be said of Sindhis, Punjabis, Pakhtuns etc when it concerns them. Nationalism, like religion, weighs good and evil based on who does it and thus there is a high tolerance for the cruelty perpetrated by ‘our people. Whether such deeds were reprehensible or commendable, or even whether they happened, is mostly decided according to nationalistic and religious preference. Nationalism is transported by the belief that the past can be altered and transfers its fantasy world to the history books wherever possible.

If Nazism was pure nationalism then Communism of the recent past and Political Islam of today are pertinent examples of Transferred Nationalism.