This false Sunni-Shia and Saudi-Iran binary by Vali Nasr is a major disservice to thousands of Sunni and Shia Muslims, Christians, Yezidis, Kurds and other communities who are being massacred in countries as diverse as Nigeria, Kenya, Syria, Libya, Iraq, Pakistan, Afghanistan etc by the transnational takfiri Wahhabi and Deobandi Complex variously known as ISIS, Al Qaeda, Taliban, ASWJ-LeJ, Al-Shabab, Boko Haram, Al-Nusra and Jamaah Islamiah.

Only a few days ago, 48 fishermen were killed by Boko Haram in Nigeria and 54 people were killed by Taliban in a suicide blast in Afghanistan. This incessant massacre of Christians, Sunni and Shia Muslims by the transnational Whahabi Deobandi Complex is Sunni vs Shia? Saudi vs Iran?

45,000 Sunni Sufis and Barelvis have been killed by Deobandi terrorists in Pakistan due to 14 centuries old Sunni-Shia binary?

Sunni and Shia, the way we see them today, were not there at least until the Abbasid Caliphate. That’s, however, beside the point. Our focus is and should remain on Deobandi-Wahhabi terrorism against both Sunni and Shia and other communities.

When asked a question about the rise of extremism in Pakistan, Vali Nasr said: “When the rich become disconnected with the poor, the poor turn to the clerics.” (Express Tribune, 23 Nov 2014)

It’s now empirically proven that transnational Wahhabi and Deobandi terrorism cannot be explained from a Marxits lens (in a Taiq Ali style). The 9/11 hijackers were not famine stricken men from Ethiopia. In fact, the Deoabndi takfiri suicide bombers who are routinely blowing themselves up at Sunni Sufi shrines and Shia Ashura parades in Pakistan are connected with the petro-dollar rich Saudi Sheikhs and their equally rich Deobandi and Wahhabi proxies. This puritanical and violent ideology is evil per se!

This one from The News:

“Pakistan, having the largest Shia population after Iraq, is the canary in the coalmine of sectarianism, Dr Vali Nasr, the dean of advanced international studies at the Johns Hopkins University, said on Saturday.
He was delivering a lecture on the growing role of sectarianism in Muslim politics globally and in Pakistan at the Habib University on Saturday.
Nasr, who is also a member of the US government’s board on foreign policy, said the growth of sectarianism in Pakistan had been the manifestation of the Iran-Saudi political rivalry stemming from trying to maintain a hold in the Middle East.”

This Saudi-Iran proxy war theory is the preferred discourse of ASWJ, Saudis, ISI and CIA to justify or/and obfuscate Wahhabi/Deobandi terrorism against Sunni, Shia, Christian and other communities.

Ideologically, this man has now contributed to, justified and enabled future massacres of Sunni Sufis and Shias in Pakistan.

In fact, the very title of the talk at Habib University was a recipe for disaster. Sectarianism is always a false neutral and indequate term to describe Deobandi Wahhabi terrorism against Sunni and Shia.

I would like to see the full video of his speech in Karachi for further comments. However, the reports in the media and social media about the contents of Vali Nasr’s lecture are really discomfiting.

Attended a lecture of Prof. Vali Nasr, Dean John Hopkins University, US, at Habib University on, Karachi on how sectarianism effecting Islam.
Prof. Vali stressed for religious plurality in Islam for the peace but the sectarian fight between Shia Islam and Sunni Islam is old and goes beyond theological difference. It has now become more political and more bloody, he argued.
He said Hasan al-Bana and Moulana Moodoodi could not create Islamic State through revolution but Khomeini did in 1979.
About Shia in the middle east, he said shias preferred to identify themselves as secular and joined secular parties but after the exploitation and killing of Shia in Lebanon by Palestinians and the mass murder of 300,000 shias at the hands of sadam in Iraq changed their thinking and finally led them to form their own religious identity.
He said the emergence of Iraq as a Shia state in the heart of Arabian Peninsula sent shock waves across the Sunni States. It was the first Arab country emerging as Shia state..
About the ISIS, he said the it’s emergence is the reaction of growing shiaism in the Arab world. If ISIS becomes successful in the creation of Sunni state in territories of Iraq and Syria, it would create problems for neighbouring States.
He said that it is not for the first time that ISIS is exterminating the minorities like Shias, Yazidis and kurds but Saudi too killed minorities in 1920s
To me the interesting in part of the lecture was that Saudi Monarchy, which is comprising of 35000 royal family members, consumes 45% of GDP.
He said major demand of Shia clerics today is that Shia Islam should be recognized as fifth school of thought in Islam by Sunnis and if it is done then there will peace in the Islamic world, he argued.
While talking about Saudi-Iran relationship, he said much depends on Iran-US nuclear deal. If Iran becomes successful in making nuclear bomb then Iran will emerge as dominant power in Middle Eastern politics.
For peace in Islamic world, plurality should be allowed, without which there won’t be peace, he argued… 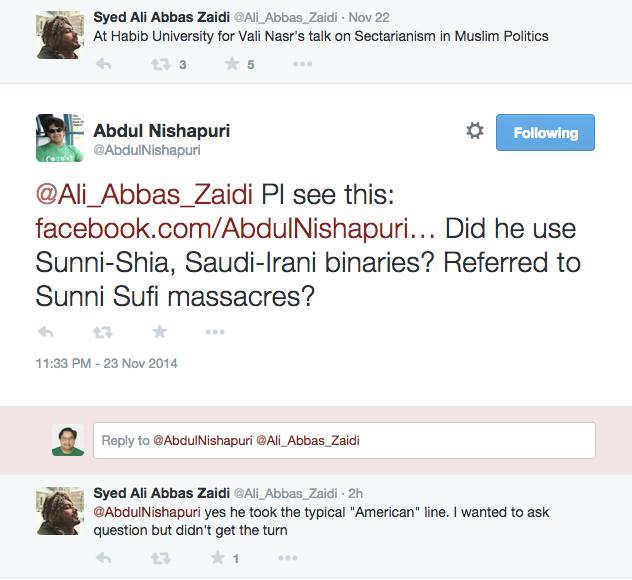 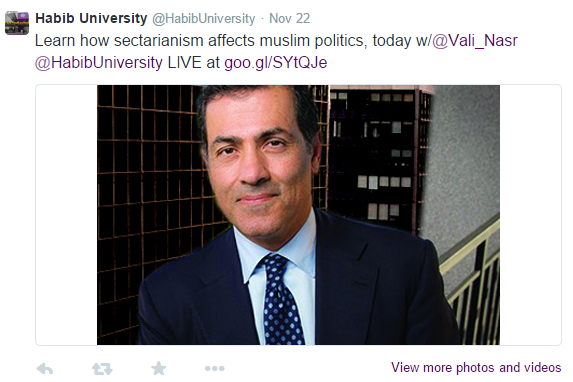 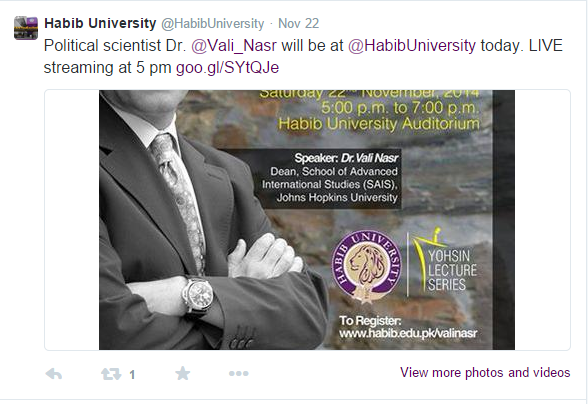 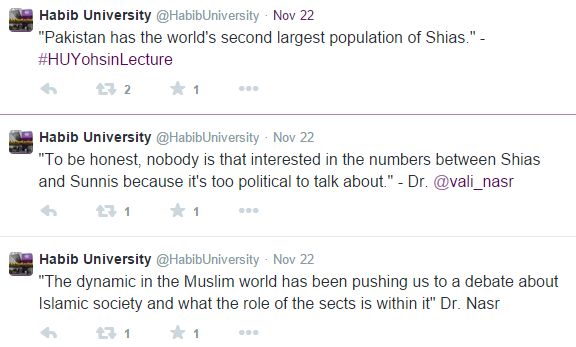 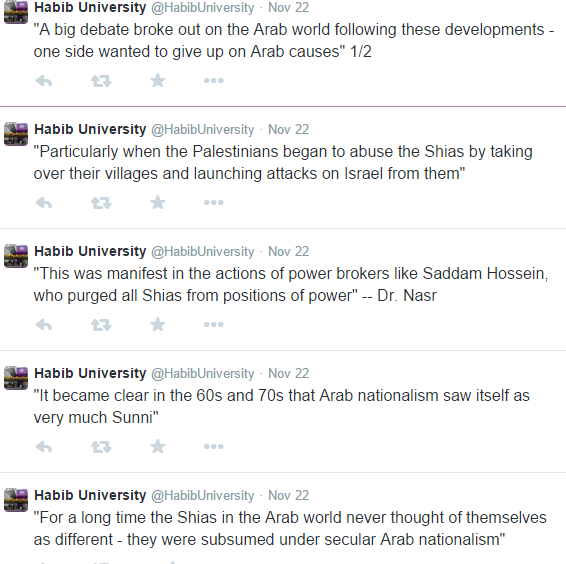 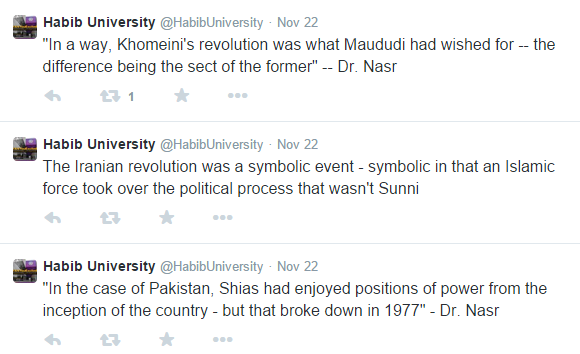 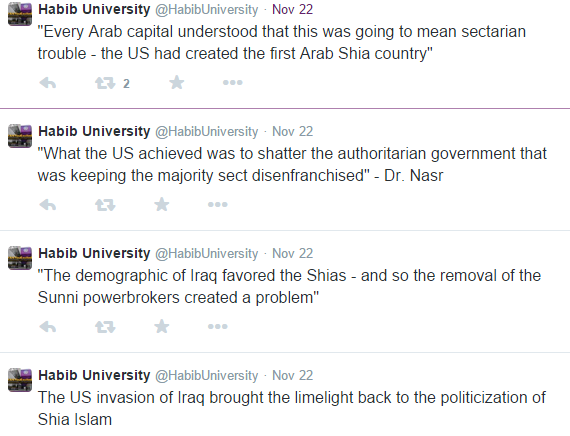 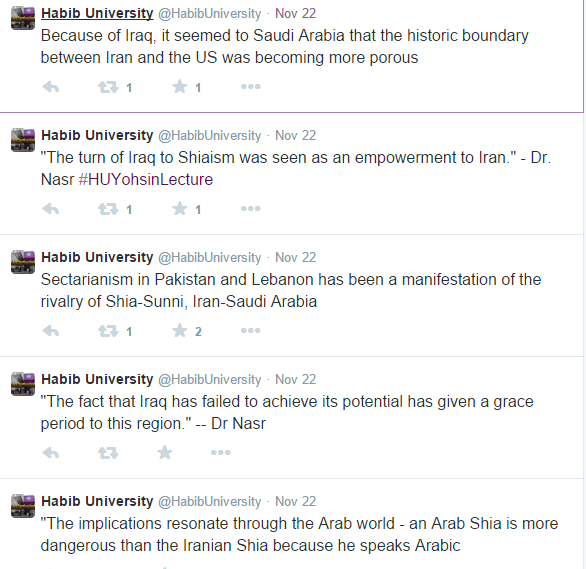 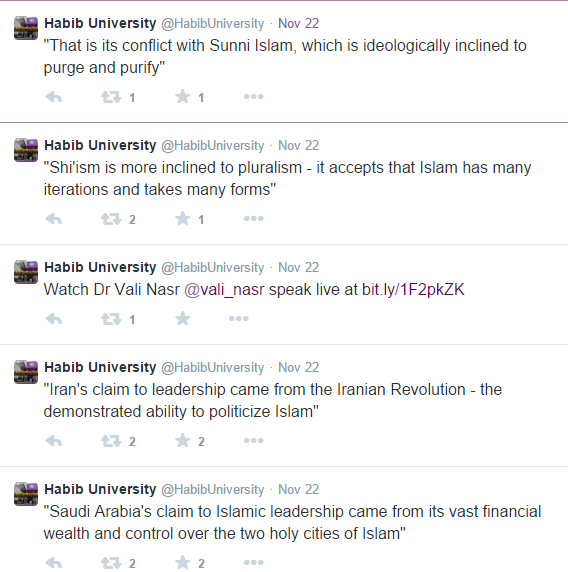 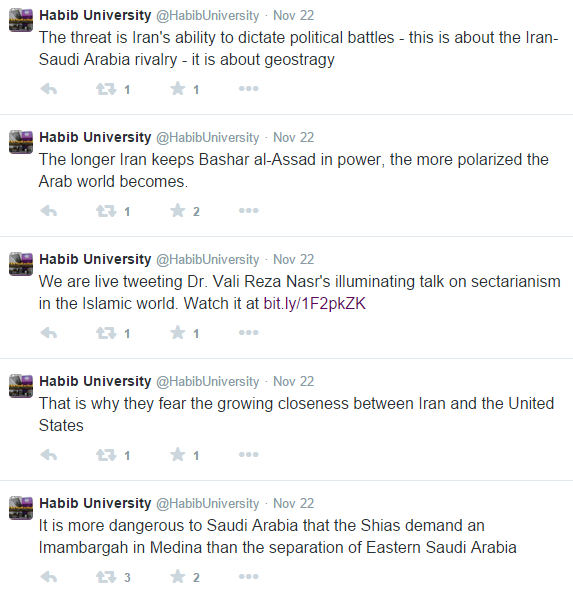 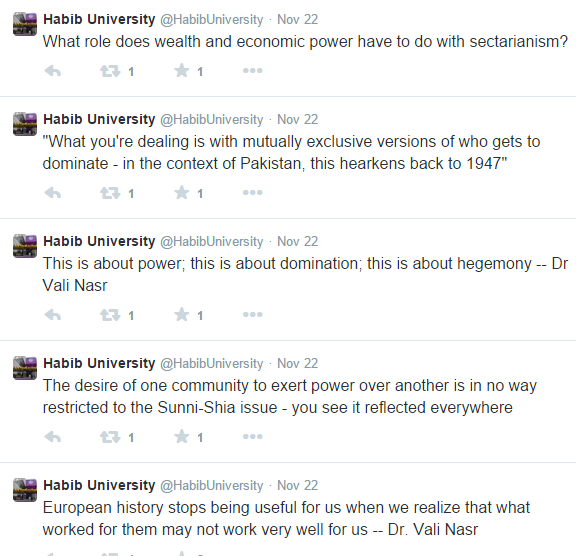 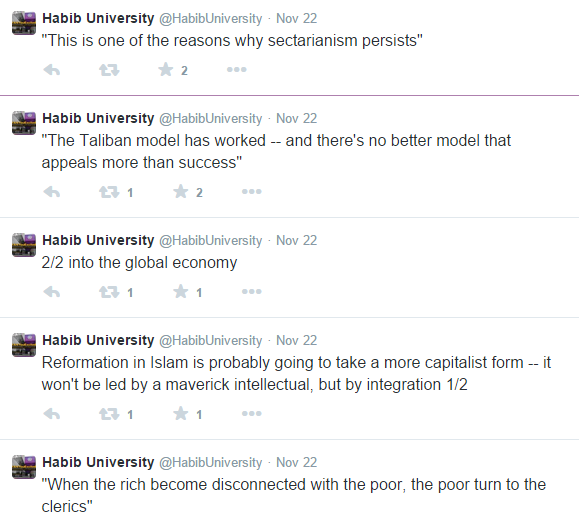 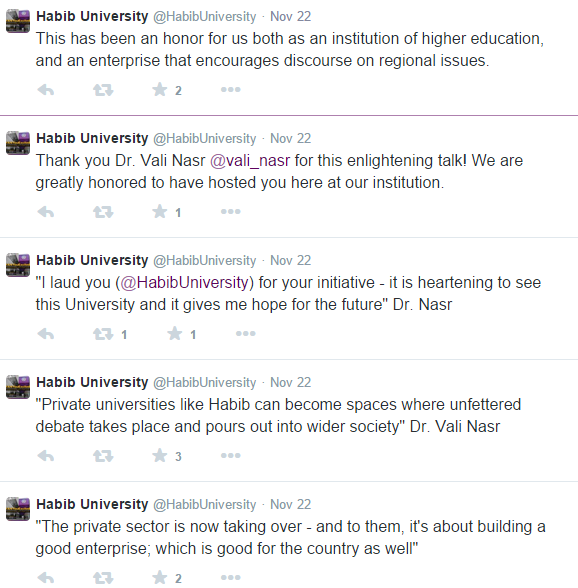