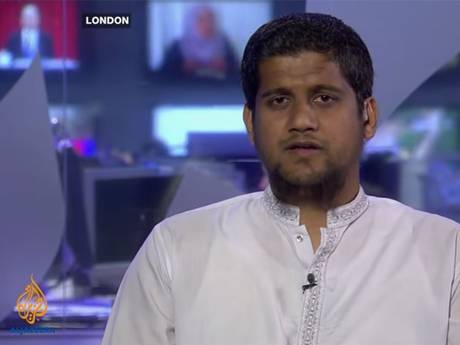 A British jihadist who skipped bail to join Isis in Syria has taunted police by posing on Twitter with his newborn son hailing a new “generation” of Islamists.

Abu Rumaysah, who defied authorities to leave the UK earlier this year, posted the photograph with the hashtag #GenerationKhilafah, meaning those who live under the self-declared caliphate.

He wrote: “Alhamdulillah (all praise be to Allah) Allah (God) blessed me with a healthy baby boy in the Islamic State.

“He is another great addition to the Islamic State. And he’s definitely not British.”

Also known as Siddhartha Dhar, he was well-known in Britain for frequent television appearances declaring his wish to live under the so-called Islamic State that militants are fighting to establish in Iraq and Syria.

Despite being subject to a travel ban, Rumaysah left London on a coach bound for Paris and travelled on to an unknown Isis stronghold to live with his wife and four children.

The 31-year-old had been arrested on suspicion of encouraging terrorism on 25 September, along with eight other men, as part of an investigation into the banned extremist group al-Muhajiroun, headed by radical preacher Anjem Choudhary.

After his arrival, Rumaysah posted on Twitter: “Alhamdulillah (all praise be to Allah), that He (and only He) facilitated a path for me and my family to live in the Islamic State.

“Inshaa’Allah (God willing) we will defeat the final Crusade. USA and her allies are on their last legs. The Islamic State is here to stay.”

Hopefully soon we can join forces to crush the global Crusade against Islam and Muslims in the East and West.

Mocking British intelligence and surveillance systems as “shoddy” for allowing his escape, Rumaysah dubbed Theresa May the “wicked witch of the West” and claimed another British extremist has also managed to travel to Syria.

“Hopefully soon we can join forces to crush the global Crusade against Islam and Muslims in the East and West,” he wrote.

In an interview on Channel 4 News earlier this year, Rumaysah said he would happily denounce his British citizenship in order to go out to Syria and live in what he called “the Islamic State”, under “the Shariah”.

Up to 500 British citizens are believed to have travelled to Iraq and Syria to join Isis’ bloody battle to establish a hardline caliphate but Charlie Winter, from the counter-extremism thinktank Quilliam, said not all may intend to fight.

He said the fact Rumaysah reportedly took his family suggested it was unlikely he would take up arms and could simply be going out to live there as a way of “contributing” to life under Isis.

“Isis are calling for people who aren’t necessarily soldiers to go there and populate the area, to make it into a society,” Mr Winter added. “There are more and more accounts of people going out and taking their family.”

The Metropolitan Police confirmed officers were “working to establish” where Rumaysah had gone.

A spokesperson said: “He was bailed to a date in January next year with bail conditions. Police are now working to establish his whereabouts.”