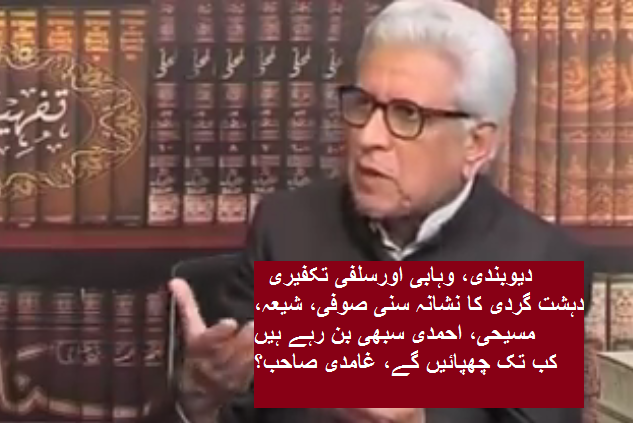 On 1 November 2014, Pakistan’s “moderate” cleric Javed Ahmad Ghamidi discussed the significance of “Unity and Diversity (Shia Sunni Differences)” in Samaa Tv’s program Ghamidi Kay Saath (Host: Nida Sameer). In that program, Ghamidi said quite a few things which can be easily described as obfuscation of systematic genocide of Shias, Sunni Sufis/Barelvis and other communities at the hands of Deobandi takfiri terrorists. Ghamidi said that due to Saudi and Iranian influence, Shias and Sunnis are beheading each other in Pakistan. Nothing could be further from truth.

Here’s a summary of my comments and observations:

1. Ghamidi constructs Sunni-Shia, Saudi-Iran binary, says that both Sunni and Shia are beheding each other in Pakistan. This is a classical example of false binary, fase neutrality and dishonest comparison. Where exactly are Iran-backed Shia militant groups in Pakistan and who are they beheading? In fact Ghamidi wipes out many instance of beheadings of Sunni Sufis and Barelvis by Deobandi takfiri terrorists. There is, for example, a famous case of Sunni beheading by Deobandi ASWJ and hanging his head from a bridge in Karachi. https://lubpak.net/archives/293769

2. He compeltely wipes out the fact that Deobandi takfiri terrorists of TTP-ASWJ etc who have killed 22,000 Shia Muslims have also massacred more than 45,000 Sunni Sufis and Barelvis in Pakistan. Thus, it is the Deobandi takfiri vs the rest of Pakistan, not Sunni vs Shia. https://lubpak.net/archives/323499

3. Makes frequent mention of Imam Abu Hanifa, Imam Malik etc but removes any mention of Imam Jafar Sadiq and other pioneers of Shia or Jafari school of Islam. No reference is made to Al-Azhar’s Shaikh Mahmood Shaltoot’s famous fatwa that Shia school (Jafari) is the fifth legitimate school of Islam and should be taught in Islamic madrassahs. https://lubpak.net/archives/233379

4. Presents Malaysia as a model of tolerance completely removing the fact that not only Shias but also Ahmadis are blatantly pesecuted in that country, delcared as deviant and heretic sects. In fact, in Malaysia and Indonesia, there are frequent acttacks on Shia Muslims’ mosques and Ashura rituals of Muharram. http://www.themalaysianinsider.com/malaysia/article/over-100-people-arrested-in-latest-crackdown-on-shia-muslims

Of course, we cannot ignore the fact that it is none else than Javed Ghamidi who in his previous lectures and statements clearly said that some of the Sunni Sufi and Shia beliefs and practices and rituals have nothing to do with the ‘original and pure’ Islam. By issuing such statements, Mr Ghamidi actually paved way for the open takfiri violence against Sunni Sufis, Barelvis, Shias and other commmunities by Deobandi takfiri terrorists in Pakistan. https://lubpak.net/archives/228942

Interestingly, some of Pakistan’s pseudo- or commercial-liberals who are known for promoting Deobandi hate clerics such as Tahir Ashrafi and Ludhyanvi as prophets of peace are currently promoting Javed Ghamidi as a moderate and peace-loving scholar. How can anyone who describes Sunni Sufi and Shia beliefs and practics un-Islamic be described as moderate?

More importantly, how can we hope to address the problem of terrorism and violence in Pakistan and elsewhere unless we are not honest enough to identify its takfiri Deobandi and Wahhabi/Salafi roots?

Click here to post a comment
Fauzia Wahab: A single mother who could – by Dr. Saif ur Rehman
How pseudo progressives routinely hide the Salafi and Deobandi belief system of ISIS and the Taliban