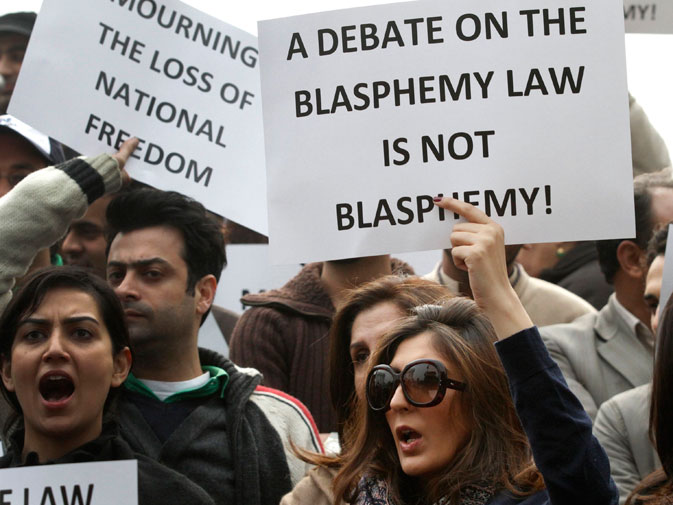 What a torrid couple of weeks it’s been for anyone who has been accused of blasphemy in Pakistan. And might you there are more people accused than you might think.

Starting off with Asia Bibi – she has been sentenced to death. Then we had the blasphemy mudslinging match between two secular (sure) parties, the Pakistan Peoples Party (PPP) and Muttahida Qaumi Movement (MQM), with Khurshid Shah being accused of blasphemy for disrespecting the word muhajir – these allegations are getting more innovative with every passing moment.

This week a Christian couple was burnt alive for alleged blasphemy – nothing new here unfortunately, I don’t even know why Christians bother having a debate with a Muslim in this country. What next, a Christian dubbed a blasphemer for telling a Muslim that Misbah is better than Afridi? Then of course a policeman took the law in his own hands and duly murdered a man with an axe for alleged blasphemy.

You could be burnt alive in a kiln, decapitated with an axe, have your career destroyed and basically your existence taken away from you in one way or the other if you are accused of blasphemy. Now with people queuing for blasphemy proofing measures, we’ve come up with a few tips that collectively form a security jacket against blasphemy allegations.

Here’s what the jacket is composed of:

Don’t be a non-Muslim

This one’s obvious. If you’re a Muslim the odds are seriously reduced of you being accused of blasphemy. However, just make sure that you’re the right kind of Muslim. Deobandi would be perfect, but anything within the Sunni realm would do – barring the Ahmadiya of course.

Don’t disagree with a Muslim

As mentioned above, if God forbid you are a non-Muslim or a wrong kind of Muslim, make sure you don’t indulge in any debates with Muslims. Because you never know when you might disrespect Islam without even mentioning anything religious.

Be careful with papers

When you are putting any papers in the trash can just make sure you don’t commit blasphemy. Monitor all papers carefully before dumping anything.

If you have a disease of being rational, it’s best that you don’t live in this country at all. Logic and reason have resulted in more blasphemers than anything else.

Believe everything that the mullah tells you

Blind faith is very important when it comes to avoiding blasphemy. And we’re not talking about blind faith on a deity, but blind faith on a mullah. If you ever feel that your Friday sermon is too bigoted, jingoistic or intolerant, immediately rid yourself off blasphemous thoughts.

If you follow the Islam of ISIS, TTP, Boko Haram, al-Qaeda, et al, avoiding blasphemy would be made significantly easier for you. Islamists are rarely killed for blasphemy regardless of how much they defame Islam.

Accuse someone else of blasphemy before you get accused

Ever heard of a person who had at any point in their life accused another person of blasphemy being accused of blasphemy themselves? Do someone else, before you get done.

Click here to post a comment
Libyan model for Syria? The West is silent as Libya falls into the abyss – Patrick Cockburn
Jamaat-e-Islami’s role in takfiri terrorism: Most of Jundallah members had association with JI, IJT – by Amir Mir (The News)