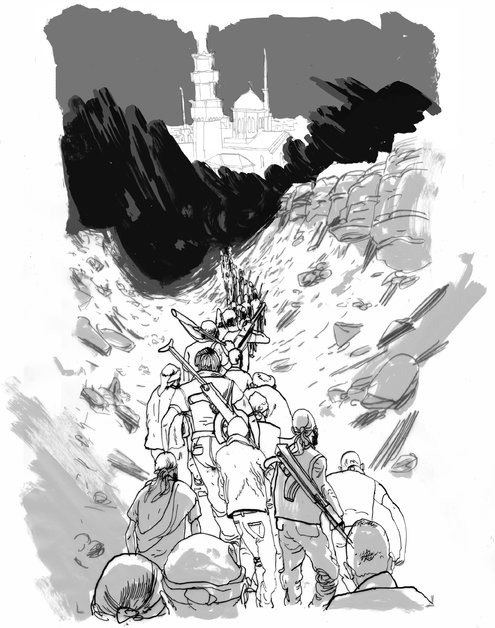 LONDON — LAST week, President Obama virtually declared war on the Islamic State in Iraq and Syria. But it is hard to reconcile the seemingly urgent need to confront the threat posed by this organization with the chosen means of doing so.

By opting to support the “moderate” Syrian opposition and running the risk of an open confrontation with President Bashar al-Assad’s regime, the West appears to be primarily appeasing Arab Persian Gulf allies that have turned the overthrow of Mr. Assad into a policy fetish that runs against any rational calculation of how to defeat Islamist terrorism.

The persistent belief in Western policy circles that there is a “moderate opposition” in Syria — reiterated at the close of a NATO summit meeting in Wales on Sept. 5 — warrants serious scrutiny. The very notion of a “vetted” opposition has an absurd ring to it. It assumes that moderation is an identifiable, fixed element that can be sorted out from other, tainted characteristics. It further presumes that the vetting process will not stain those being vetted. It takes as a given that Western-backed opposition will prevail and in turn provide the basis for a happier and better Syria.

There is little to support any of these beliefs. The most effective forces on the ground today — and for the foreseeable future — are decidedly nonmoderate. This is not primarily because the West has let down the Syrian opposition, but because the conflict now sweeping through the Levant is grounded in elements that have little to do with the presumed struggle between moderation and extremism.

Sunni jihadists have been successful precisely because of their insidious appeal to deep-rooted societal and religious instincts and their ability to evoke symbols that elicit a genuine response across the Sunni world, despite their brutality. Anti-Shiite sectarian sentiment adds to their appeal; they have a substantive ideological overlap with Al Qaeda (which disavowed ISIS in February) and with other Syrian rebel groups, like the Saudi-backed Islamic Front, the gulf-financed Ahrar al-Sham and the Qaeda-associated Nusra Front.

And let’s not forget the Syrian Muslim Brotherhood, whose role in inflaming the conflict has been disguised under the mantle of the “moderate” Syrian National Coalition, backed by the West, the Arab nations and Turkey. Ultimately, this is the same bed that the West made — and in which it slept — in Afghanistan in the 1980s.

The alleged moderates have never put together a convincing national program or offered a viable alternative to Mr. Assad. The truth is that there are no “armed moderates” (or “moderate terrorists”) in the Arab world — and precious few beyond. The genuine “moderates” won’t take up arms, and those who do are not truly moderates.

The suggestion in Washington and Brussels that a “Sunni coalition,” made up of Arab states and Turkey, can deal with ISIS is equally fatuous. Neither has any real credibility among the Sunni constituencies attracted to Al Qaeda and similar terrorist organizations; indeed, these countries are their enemies.

In many ways, the current struggle among the Arab gulf kingdoms (Saudi Arabia, Qatar and the United Arab Emirates) and the various iterations of violent jihadism is a family fight, a struggle for power and legitimacy within Wahhabist, salafist and other interpretations of Islam. So by insisting on a Sunni coalition, the West will only appear to be joining a gulf-led war on the Shiites of Iraq, Syria and Iran. (It bears noting that neither Hezbollah, the Iranian-backed Shiite movement based in Lebanon, nor Iran has declared a global war on the West and non-Muslims, unlike Saudi-inspired salafists and their jihadist brethren.)

Supporting the Syrian “moderates” would make some military sense only if it would make any difference on the ground. But in the absence of any large-scale Western or regional commitment to deploy troops, the only real “boots on the ground” capable of destroying ISIS are the Syrian Army and its local allies, including Hezbollah.

Despite its oppressive and brutal history, Mr. Assad’s regime not only poses no discernible threat to the West or its interests, but is ready and willing to act on the basis of common objectives. It would seem to be the height of strategic folly to initiate a military campaign on Syrian soil that is bound to result in a serious confrontation with Mr. Assad’s forces, and possibly Iran and Russia as well, at a time when the most effective course of action would be to act in concert with him to confront a grave common threat.

As the West continues to weigh its options, a strategic rethinking is necessary.

First, it is imperative to find a way to work with the most effective forces on the ground: Mr. Assad’s Syrian Army and the Iranian-backed Hezbollah fighters. All of the West’s differences with the Syrian regime should be postponed until the tide of battle has turned. Indeed, an anti-ISIS coalition that includes Syria, Iran and Russia may be the only real key to a political engagement with Mr. Assad that could help bring about a peaceful resolution of the three-year-old Syrian civil war.

Second, the West must overcome its reluctance to offend the Saudis, and speak out much more forcefully against the insidious influence of Wahhabism and the ideological support it offers violent extremism. The Arab gulf states must choose a side. They cannot continue to finance terrorism and use fundamentalism as a policy tool and yet claim to be fighting it abroad. Saudi Arabia is both a sponsor and a target of jihad — it should wish to be neither.

This may well be the real test of the West’s leadership. And if the United States and its allies instead amble into another major military conflict in the Middle East without realistic objectives and a cleareyed plan to achieve them, they will have already failed.