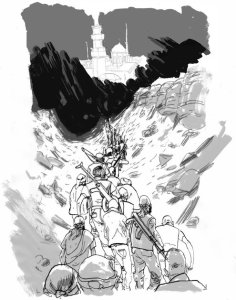 As the murderous, terrorist Islamic State continues to threaten Iraq, the region and potentially the United States, it is vitally important that we examine how this problem arose. Any actions we take today must be informed by what we’ve already done in the past, and how effective our actions have been.

Shooting first and asking questions later has never been a good foreign policy. The past year has been a perfect example.

In September President Obama and many in Washington were eager for a U.S. intervention in Syria to assist the rebel groups fighting President Bashar Assad’s government. Arguing against military strikes, I wrote that “Bashar Assad is clearly not an American ally. But does his ouster encourage stability in the Middle East, or would his ouster actually encourage instability?”

The administration’s goal has been to degrade Assad’s power, forcing him to negotiate with the rebels. But degrading Assad’s military capacity also degrades his ability to fend off the Islamic State of Iraq and al-Sham. Assad’s government recently bombed the self-proclaimed capital of ISIS in Raqqa, Syria.

To interventionists like former Secretary of State Hillary Clinton, we would caution that arming the Islamic rebels in Syria created a haven for the Islamic State. We are lucky Mrs. Clinton didn’t get her way and the Obama administration did not bring about regime change in Syria. That new regime might well be ISIS.

This is not to say the U.S. should ally with Assad. But we should recognize how regime change in Syria could have helped and emboldened the Islamic State, and recognize that those now calling for war against ISIS are still calling for arms to factions allied with ISIS in the Syrian civil war. We should realize that the interventionists are calling for Islamic rebels to win in Syria and for the same Islamic rebels to lose in Iraq. While no one in the West supports Assad, replacing him with ISIS would be a disaster.

Our Middle Eastern policy is unhinged, flailing about to see who to act against next, with little thought to the consequences. This is not a foreign policy.

Those who say we should have done more to arm the Syrian rebel groups have it backward. Mrs. Clinton was also eager to shoot first in Syria before asking some important questions. Her successor John Kerry was no better, calling the failure to strike Syria a “Munich moment.”

Some now speculate Mr. Kerry and the administration might have to walk back or at least mute their critiques of Assad in the interest of defeating the Islamic State.

A reasonable degree of foresight should be a prerequisite for holding high office. So should basic hindsight. This administration has neither.

But the same is true of hawkish members of my own party. Some said it would be “catastrophic” if we failed to strike Syria. What they were advocating for then—striking down Assad’s regime—would have made our current situation even worse, as it would have eliminated the only regional counterweight to the ISIS threat.

Our so-called foreign policy experts are failing us miserably. The Obama administration’s feckless veering is making it worse. It seems the only thing both sides of this flawed debate agree on is that “something” must be done. It is the only thing they ever agree on.

But the problem is, we did do something. We aided those who’ve contributed to the rise of the Islamic State. The CIA delivered arms and other equipment to Syrian rebels, strengthening the side of the ISIS jihadists. Some even traveled to Syria from America to give moral and material support to these rebels even though there had been multiple reports some were allied with al Qaeda.

Patrick Cockburn, Middle East correspondent for the London newspaper, the Independent, recently reported something disturbing about these rebel groups in Syria. In his new book, “The Jihadis Return: ISIS and the New Sunni Uprising,” Mr. Cockburn writes that he traveled to southeast Turkey earlier in the year where “a source told me that ‘without exception’ they all expressed enthusiasm for the 9/11 attacks and hoped the same thing would happen in Europe as well as the U.S.” It’s safe to say these rebels are probably not friends of the United States.

“If American interests are at stake,” I said in September, “then it is incumbent upon those advocating for military action to convince Congress and the American people of that threat. Too often, the debate begins and ends with an assertion that our national interest is at stake without any evidence of that assertion. The burden of proof lies with those who wish to engage in war.”

Those wanting a U.S. war in Syria could not clearly show a U.S. national interest then, and they have been proven foolish now. A more realistic foreign policy would recognize that there are evil people and tyrannical regimes in this world, but also that America cannot police or solve every problem across the globe. Only after recognizing the practical limits of our foreign policy can we pursue policies that are in the best interest of the U.S.

The Islamic State represents a threat that should be taken seriously. But we should also recall how recent foreign-policy decisions have helped these extremists so that we don’t make the same mistake of potentially aiding our enemies again.

Mr. Paul, a Republican, is a U.S. senator from Kentucky.