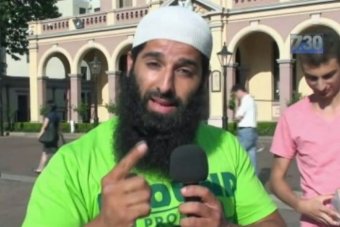 Police have issued an arrest warrant for a former Kings Cross nightclub bouncer believed to be Australia’s most senior member of the Islamic State (IS) militant group in Syria and Iraq, following an investigation by the ABC’s 7.30 program.

Authorities say Mohammad Ali Baryalei, 33, has used a trusted position in IS operational command to funnel more than half of the 60 Australians currently fighting in the wars.

Counter-terrorism sources have told 7.30 Baryalei recruited a who’s who of Australian IS fighters, including senior fighters Mohamed Elomar and Khaled Sharrouf, who has posted pictures online of his seven-year-old son holding a severed head in Syria, as well as videos of himself and Elomar executing prisoners in Iraq.

Authorities say Baryalei has also facilitated the recruitment of at least two 17-year-old boys and at least seven Australians who have gone on to be killed in Syria and Iraq.

In a statement released to 7.30, the Australian Federal Police say an arrest warrant has been issued against Baryalei for “terrorism-related activity”.

“Should Baryalei return to Australia, this warrant authorises law enforcement to arrest him immediately,” an AFP spokesman said.

“As this matter is ongoing it would not be appropriate for the AFP to comment further.”

Baryalei is from an aristocratic family from Afghanistan who came to Australia as refugees when he was a child.

The 33-year-old was an aspiring actor who had a fleeting appearance on the true-crime series, Underbelly, but years ago turned to radical Islam in Sydney.

Baryalei became a leader of the Street Dawah preaching movement in Sydney, where he formed a cell of jihadists.

He proselytised with at least five men who went on to die in Syria and Iraq and many more who are still fighting.

According to court documents, Baryalei arrived in Turkey in April 2013 and set up base at the Syrian border, where he initially recruited Australians to the Al Qaeda group, Jabhat Al Nusrah.

However, counter-terrorism sources say he became a key Australian operative for IS early this year.