The UK’s terror threat level has been raised from “substantial” to “severe” in response to conflicts in Iraq and Syria, Home Secretary Theresa May says.

The new alert level rates the risk of an attack on the UK “highly likely”, although Mrs May said there was no evidence to suggest one was “imminent”.

It is the second highest of five possible UK threat levels.

David Cameron promised new legislation would make it easier to take passports from those travelling abroad to fight.

‘Gaps in armoury’ The home secretary already has the power, under the Royal Prerogative, to withhold a passport if it is in the public interest to stop somebody travelling.

That power has been used 23 times between since April 2013 to stop people travelling abroad for alleged terrorist-related or criminal activity.

In a Downing Street press conference on Friday, the prime minister said Islamic State (IS) extremists – who are attempting to establish a “caliphate”, or Islamic state – represented a “greater and deeper threat to our security than we have known before”.

He said that “learning lessons from the past doesn’t mean there isn’t a place for our military” in combating the threat, but did not commit to any military action.

He added the “threat is growing” from Britons travelling to fight with IS, saying at least 500 people had travelled from the UK “to fight in Syria and potentially Iraq”.

And efforts are continuing to identify a suspected British jihadist who appeared in IS footage of the killing of US journalist James Foley.

The raised threat level may not lead to visible signs of change on the streets – but it is a sign of the increased concern and security activity behind the scenes involving all of the UK’s intelligence and security bodies.

The last time the level was this high was between January 2010 and the summer of 2011. This may have been linked to attempts by an al-Qaeda affiliate to smuggle bombs on to planes heading out of the Middle East.

The highest level is “critical”- meaning an attack is expected imminently. Officials have twice put the country on such an alert – in 2006 after the discovery of liquid bombs aimed at airliners and then the following year when extremists attempted to bomb Glasgow Airport (pictured) and London’s West End.

In other words – if security chiefs had knowledge of a clear threat they could not contain, the level would already be one notch higher.

Mr Cameron said the murder of Mr Foley was “clear evidence – not that any more was needed – that this is not some far-off [problem], thousands of miles away, that we can ignore”.

He did not give extensive details on what the changed threat level would mean, stressing people “should continue to go about our lives in the normal way”. 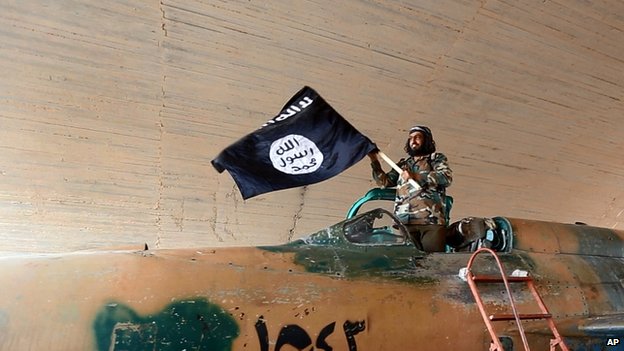 Mr Cameron said other measures to tackle the threat included:

More steps to deal with the threat would be announced on Monday, Mr Cameron said, which would include details on how to stop would-be terrorists travelling abroad.

He said there were “gaps in our armoury” which needed to be strengthened.

Earlier, in a statement, Mrs May said: “The increase in the threat level is related to developments in Syria and Iraq where terrorist groups are planning attacks against the West.

“Some of those plots are likely to involve foreign fighters who have travelled there from the UK and Europe to take part in those conflicts.

“The first and most important duty of government is the protection of the British people.”

Mrs May said decisions about the threat level were made by the Joint Terrorism Analysis Centre (JTAC).

She added: “JTAC’s judgements about that threat level are made on the basis of the very latest intelligence and are independent of ministers.”

AC Rowley said: “From this afternoon we will begin to increase our levels of visible patrols and implement other security and protection measures.

“We will also build on existing community relations to provide reassurance and seek their support and assistance in keeping the UK safe.”

He urged communities and families to report anyone who is “vulnerable, a danger or escalating towards terrorism” by calling the anti-terrorist hotline on 0800 789 321.

Baroness Neville-Jones, a former chair of the Joint Intelligence Committee, said the higher threat level was “justified”, adding it was “not something you do for the sake of it”.

Shadow home secretary Yvette Cooper said the government’s decision to remove control orders – to restrict the movements of terror suspects – should be reconsidered, adding there should be “proper powers in place when there is an extreme threat”.

She said the government needed to support communities, and families in particular, and that more could be done through its anti-terrorism Prevent scheme.

The terror threat level was made public in 2006.

The level last changed in July 2011 when it was reduced to “substantial”.

The threat level in the US has not changed. US secretary for homeland security Jeh Johnson said he had spoken to Mrs May about changes to the UK threat level but that he was not aware of any “specific, credible” threat to the US.

What is the Joint Terrorism Analysis Centre?