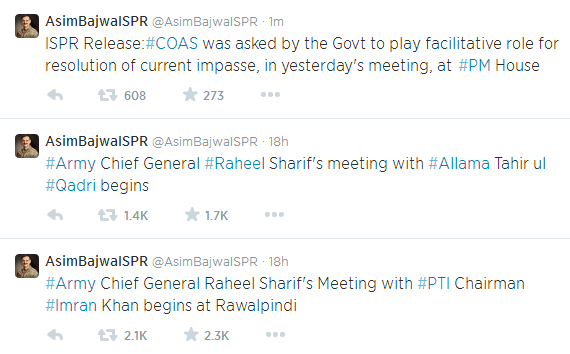 It is only the arrogance and duplicity of the murderous PML N regime that has brought the situation to such as impasse.  For weeks, Nawaz Sharif, his cronies and his commercial liberal collaborators have leaked stories about a scriptwriter.  Essentially, they were pointing fingers at the army to delegitimize the protests of PAT and PTI.  As the events unfolded, and notwithstanding the lies circulated earlier, it was Nawaz Sharif and his own party who dragged the army into a mess that could have been resolved with democratic grace.  However, for all their overuse of terms like “democracy” and “constitution”, Nawaz Sharif, his party thugs and his commercial liberal sycophants remain rooted in the dictatorial era of General Zia ul Haq.

The continuing protests by Pakistan Awami Tehreek and Pakistan Tehreek Insaaf are essentially about two major wrongdoings by the current Nawaz Sharif government.  The first is the Model Town Massacre conducted by the Punjab police under  Chief Minister Shahbaz Sharif in which over 100 innocent men and women Sufi devotees were brutally gunned down or sent to the hospital in critical condition.  The other is about the wide scale rigging allegations by PML N-influenced Punjab caretaker government under PML N hatchet man, Najam Sethi.  PTI was the party that has clearly lost the most due to this rigging.

To be fair, PTI has been protesting about this rigging since the allegations concluded in May 2013.  They have filed writ petitions, moved multiple resolutions in parliament and presented several compromise solutions to the current Nawaz Sharif regime before taking to peaceful protests in the Islamabad capital.   In the beginning, their demands were restricted to simply conducting a limited vote audit in four constituencies.  Even if all of these audits went against the PML N, they would still be able to hold on to their simple majority as well as on to their Deobandi Islamist allies like Mahmood Khan Achakzai and JUI F.

For a detailed collection of various statments by PML N media wings as well as other PML N stooges that contradict the lies of PM Nawaz Sharif, please refer to Army chief’s meeting with Imran Khan and Tahir-ul-Qadri: Why is Nawaz Sharif lying? – by Moeed Pirzada

For years, the JANG Group media touts patronized by PML N have been glorifying Nawaz Sharif as an “anti establishment” icon.  This farcical representation clearly does not comply with facts! This has its roots in the lawyer’s movement which was ostensibly supported by then DG ISI General Kiyani on whose pressure as the COAS, the dubious and corrupt Rana Iftikhar Chaudhary was reinstated as Chief Justice.  Nawaz Sharif was also alleged to be the primary funder of this discredited movement – it is obvious that the higher judiciary is deeply biased in favour of PML N and reduced to being the legal team of a corrupt, Pro Taliban government.

During all these years, Nawaz Sharif , his brother Shahbaz Sharif and other PML N cronies like Chaudhary Nisar Ali Khan continued to stay cosy with midnight meetings with COAS General Kiyani.  Nawaz Sharif, with his public collaboration with the army and Judiciary during the Memogate crisis, continued to undermine the previous elected PPP government until finally reducing the PPP Sindh under Zardari and his son, into a B-team for the PML N.

Nawaz Sharif and former COAS, General Kiyani also proliferated the Saudi  agenda in Pakistan which included the increased patronage of Deobandi terrorist organizations like ASWJ-LeJ, JeM and the Taliban as well as Salafi groups like LeT.

It was only the protest movement by the united Sunni (Barelvi/Sufi) – Shia-Christian platform under PAT as well as the political party PTI that has threatened to change the status quo in Pakistan. After weeks of blaming the Army as the script writer, it turns out that the real script of derailing Democracy in Pakistan was being written by no other than Mr. Nawaz Sharif himself.

Commercial liberals continued to spout conspiracy theories about the Army writing the script of this derailment of democracy, when it fact, it was the PML N who did this all along.   A combination of Deobandi-inspired sectarian prejudice against Sunni Barelvis, Shias and Christians under the PAT platform as well as the patronage and largesse by PML N has exposed these liberals as nothing more than dishonest and compromised spokespersons of Jati Umra.  A spineless PPP simply refused to take a position even when the FIR of the Model Town Massacre was being deliberately impeded by the thuggish PML N regime.

In the end, Democracy in Pakistan is not being derailed due to an imaginary script written at GHQ. Democracy has been derailed by overly hyped cowards and liars like Nawaz Sharif and his collection of cronies, including the once popular PPP.  Democracy is under threat in Pakistan because of the hubris of the PML N regime.  When a proper police report (FIR) cannot be launched two months after the PML N government ordered the massacre an anti-Taliban Sunni Sufi group, then democracy is being derailed.