Boys and girls dance in the PTI rallies in Constitution Avenue, fume the clerics of the Jamiat Ulema-e-Islam led by Pakistan’s leading political acrobat, Maulana Fazlur Rehman, with his uncanny ability to be part of every power setup no matter what its colour or stripes. What should the boys and girls do instead? Attend tutorials in suicide bombing? Study how to make the most of diesel permits, the word diesel forever associated with the Maulana’s name?

What hypocrites are we dealing with here? On a TV talk show I had the misfortune to be part of, Senator Hafiz Hamdullah of the same party described the PTI ongoing rallies as a nightclub show. I looked up in surprise and asked the maulana that as a man of the cloth how did he know what a nightclub was? Had he ever been in one? Smirking, he gave no answer.

Maulana Fazlur Rehman has described the dharnas as an onslaught of ‘western culture’. At least he is being original, no one taking this line before. His problem is simple. Imran Khan’s PTI is now a power in Khyber Pakhtunkhwa where in happier times the Maulana stood tall and imposing. He doesn’t like this one bit. Hence his anger.

Mufti Muneeb-ur-Rehman who as head of the Ruet-e-Hilal Committee never fails to send the entire nation into fits of laughter as he squints into the telescope to see whether the Eid moon has arisen, has also denounced the PTI rallies. If he had come out in the PTI’s support, that would have been something to worry about.

We should understand this phenomenon. No self-respecting maulvi true to his calling can abide the spectacle of men and women enjoying themselves. Their stuff is hellfire and denunciation, not singing and dancing. And they have a problem with women. For some reason rooted deep in their understanding of theology, they want to keep them under lock and key. Venus has never been more triumphant than in the morbid nightmares of the ulema.

And it is not just the PTI rallies which they find so galling. Close by on the same Constitution Avenue is the massive sit-in of the Pakistan Awami Tehreek led by Allama Tahirul Qadri in which women, matrons and young girls, are to be found in great numbers. The PTI folk come and go, the PTI amphitheatre, for it looks like that, looking empty in the mornings but filling up in the evening. The thousands who are in the PAT sit-in have been camped there, facing great hardships, ever since the march from Lahore. Their discipline and dedication to their cause are something to be seen.

And Allama Qadri in speech after speech talks of gender equality and equal opportunities for women and even for minorities. For the typical maulvi subscribing to, say, Maulana Fazlur Rehman’s Takfiri Deobandi brand of Islam, this is subversive stuff, alien to all that in his narrow understanding of the faith he has believed in. No wonder hardline maulvis can barely contain their anger against both Imran Khan and the Allama.

It must be said that the moderate Deobandi Jamaat-e-Islami under its new Amir, Sirajul Haq, is coming out in shining colors in this crisis. While doing its bit for a political settlement, it is using none of the language of Fazlur Rehman to paint a picture of Islam under threat. More power to Sirajul Haq. Although come to think of it, he is a dangerous man because he is conveying an enlightened and moderate image of the Jamaat. The Jamaat-e-Islami coming across as an enlightened party…I never thought I would live to see the day.

MQM supremo, Altaf Hussain, is coming across as another voice of reason and sanity, every word of his from London carefully weighed. He is calling on both sides – the government and the marchers – to show forbearance and wisdom. And he is warning them that if they don’t, the situation would spin out of their control and there would be no recourse other than the army coming in.

The MQM and the Jamaat as voices of reason – I suppose wonders will never cease. Meanwhile Maulana Fazlur Rehman and others of his ilk, including the priceless Mufti Muneeb-ur-Rehman, holding aloft, with no challengers, the banner of nonsense. A crisis like this exposes everyone and it is casting a revealing light on both the sensible ones and those of the other kind.

Mehmood Achakzai is another pro-government standard-bearer of democracy who can’t seem to contain his anger. Once upon a time he was regarded highly by the tinsel liberati to be found in the nation’s drawing rooms. Now he seems mostly to be talking to himself and like the lady in Hamlet seems to be protesting too much.

Another thing greatly upsetting the flag-bearers of democracy is the fact that the marches have been entirely peaceful, not a windowpane broken, not a flowerpot damaged…no rowdiness, no stone-throwing. The PAT crowd have been there for days and days, enduring the sun and the sudden monsoon showers, and tough conditions generally. But what to talk of their patience they have lost none of their good humour. Visiting their sit-in you can’t help noticing their upbeat mood and their ready smiles. While they look a pretty determined lot, they don’t look angry.

Maulana Fazlur Rehman says he too will mobilise his followers. Why doesn’t he? I’ll see what they look like or what their mood is after two days and nights in the open.

Mobilising people is easier said than done. The PML-N too is trying to take out anti-dharna rallies but without too much to show for them. In many places PML-N workers have ended up fighting amongst themselves.

On the high tide of his eloquence Shahbaz Sharif used to describe Asif Ali Zardari and his government as Ali Baba and the Forty Thieves. For good measure he wouldn’t fail to add that he would take Ali Baba by the collar and drag from here to Larkana. That was then. Now they are together to save democracy. Ali Baba and some of the biggest bank defaulters in Pakistan’s history out to save democracy… flanked by Maulana Diesel and Mehmood Achakzai.

I am all for democracy but my concern is also more particularly-centred: if something, God forbid, happens to the Sharifs what will become of the mess they have created in Islamabad in the name of the metro-bus service? Trying to fill the huge avenues they have dug up will bankrupt the treasury.

Critics of the marches say that the sit-ins have dirtied Constitution Avenue. Does this spoliation come even close to the larger destruction of Islamabad brought about, in the name of mega-projects, by the Sharif government?

The PAT marchers, as I keep saying, are very disciplined and dedicated. When food is to be distributed everyone stands in line and there is no crowding…which is very unPakistani-like because we like breaking our queues and storming our tables. In like disciplined manner makeshift toilets have been set up on the green median, dividing the road, in front of the Supreme Court and the National Assembly. At first glance the setting up of the toilets may look like an act of disrespect. But considering the shenanigans to which Constitution Avenue has been witness since the founding of Islamabad, this may be the best use to which Constitution Avenue has been put in its history.

Another strange thing I have to mention about these sit-ins. I have never been much of a Musalmaan – you get my meaning – all my life. But when I have visited the PTI rally with its singing and dancing and especially when I have moved over to the PAT sit-in and watched the men and women there with resolve and something like ecstasy in their eyes I have felt after a long time like a Musalmaan. But I suppose this is a sign of gathering age. 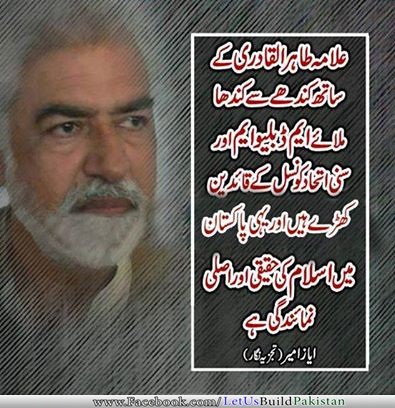