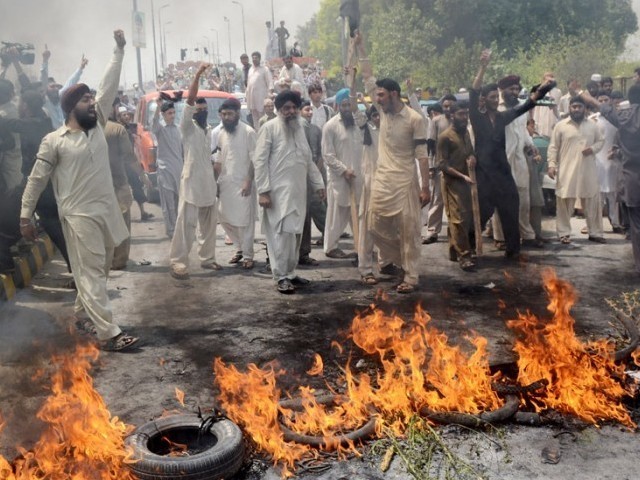 Attacks against minorities have spiked in recent months to degrees that are callous and merciless. PHOTO: FILE

Dear ruthless, relentless and barbaric attackers of the minorities in my country,

I‘d like to start by asking you about what happened day before yesterday?

With what conscience did you think that it was acceptable to brutally gun down a Sikh teenager and open fire at two other Sikh businessmen in Peshawar? Were you just having a bad day at the Hashtnagri Bazaar, as sources confirm that there was no enmity between them and you? Was the heat too much to bear that Jagmohan Singh, the teenager you shot, had to take the brunt of your barbarism? You critically injured Parimjit and Manmit Singh in the process also, who were mere traders in Peshawar. So what did you exactly gain out of this horrific display of inhumanity?

I am outraged as a Pakistani citizen. You have made a mockery out of my national flag by attacking our minorities. Had it been your way, you’d paint the ‘white’ part of the flag, the part that represents them, to ‘red’. That’s the colour that’s on your hands and in your bloodied eyes as we speak. You are the ruthless and relentless murderers who have slain our minorities in the name of our glorified religion. Save the religious debate on this letter and this post because, you hooligans, your religion does not permit killing of innocent people, no matter what creed they belong too.

This isn’t the first time that you’ve been hostile with the Sikh community in Peshawar. In recent years, several Sikhs have been victims of your strikes. Did you know that thousands of Sikhs have inhabited Peshawar and various parts of Khyber-Pakhtunkhwa (K-P) for generations? Many Sikhs have homes and businesses in the old-walled city in Peshawar. Of course you knew, but you just don’t care. The chief minister has announced a sum of Rs500,000 as compensation for Singh’s family, as though it will repair the immeasurable loss and pain they’re going through.

Day before yesterday, one of the hundreds of headlines read out loud about the killings and tortures that you have put our minorities through. Your attacks against minorities have spiked in recent months to degrees that are callous and merciless.

In September 2013, you assaulted a historic church in the same city, which killed nearly 78 people, that too on a Sunday―the day of their mass prayer. I’d like to know how it felt when your mosque in Rawalpindi was attacked in 2009, which took away the lives of countless Muslims during Friday prayers.

Did these minorities carry that attack? No, but how did it feel?

Wait, am I asking those with no conscience? Yes.

In April 2014, you barged into a Hindu ashram and even stole a ‘trishul’ (trident) in Tharparkar, Sindh. You have been targeting the Hindus in Sindh by breaking their temples, murdering them and raping their women. Did you not send two of your policemen along with their sidekicks on July 22, 2014, and gang raped a 20-year-old married girl after inflicting her with grave torture? What sort of sick beasts are you?

Five days later, on July 28, 2014, you went absolutely haywire in Gujranwala. Your barbarism and brutalisation stooped to a new form of low―killing Ahmadis while burning down homes. For heaven’s sake, even pregnant women were battered in the gruesome attack. The Human Rights Commission of Pakistan (HRCP) condemned the episode and labelled it as ‘shocking and disgusting’. But I wonder why our police failed in preventing the mob attack which resulted in the Gujranwala attack. This event is considered to be the worst form of violence that the Ahmadis in Pakistan have endured since the concurrent extremist raid in their place of worship nearly four years ago that cold-bloodedly killed of 94 Ahmadis.

As a nation, black-marking or red-painting the ‘white’ part of our prestigious flag is just not acceptable. You think you’re waging a war under the name of religion? Well news flash to you, innocents aren’t to be killed or even hurt in any way as stated by your religion. Since you are completely ruining my flag, I see the moon and star in the flag, (which is primarily for ‘progress’ and ‘knowledge’ or religion as the five pinnacles of the ‘star’ suggest the five pillars of Islam), as ‘innocent children’. Are they next on your hit list? Do you really want to play Gaza, because let me tell you, if you carry on with this, you will be plucked out one by one by our honourable forces just as those militants are being squashed now in North Waziristan.

Shame on you for not standing by Jinnah’s advocacy for minorities. He clearly specified in his maiden address that the minorities living in Pakistan would have equal rights, obligations as well as privileges. He stated,

As I end this, I hope that you stop with this barbarism, or come out in the open and show us your real face, because you are beasts and beasts aren’t afraid of coming out in the open. But you, you are mere cowards. You are among those who are more afraid of what the literate Pakistani citizens will do to you rather than the wrath of God.

With apathy for your barbaric attacks,