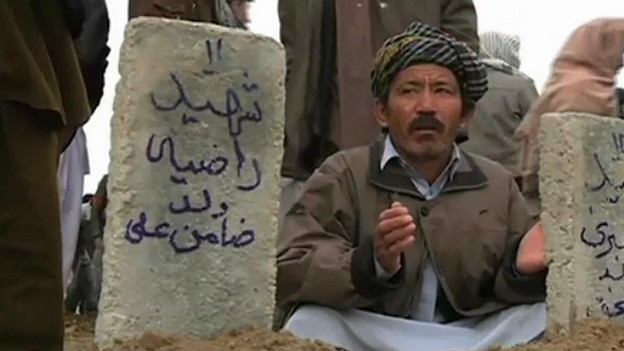 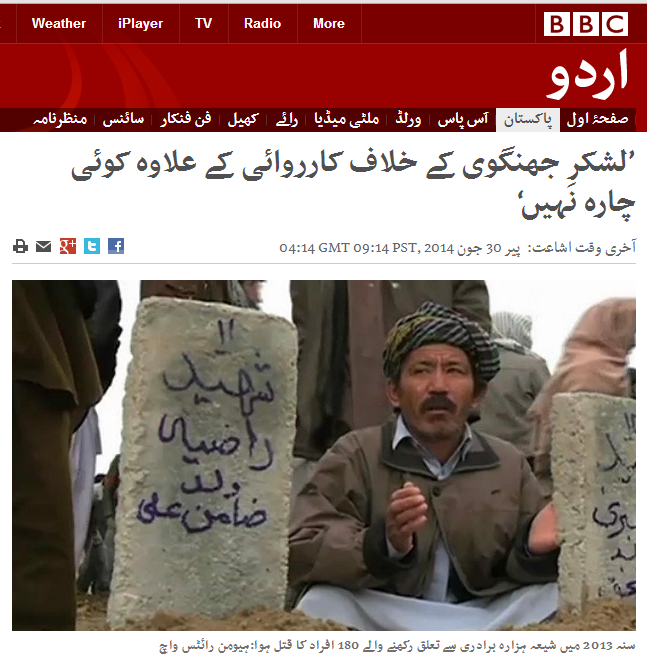 (London) – Pakistan’s government should take all necessary measures to stop Sunni extremist groups in Balochistan province from committing further killings and other abuses against Hazara and other Shia Muslims, Human Rights Watch said in a report released today.

The 62-page report, “‘We are the Walking Dead’: Killings of Shia Hazaras in Balochistan, Pakistan,” documents Sunni (Deobandi)  militant group attacks on the mostly Shia Hazara community in Balochistan. Since 2008, several hundreds of Hazara have been killed in steadily worsening targeted violence, including two bombings in the provincial capital, Quetta, in January and February 2013 that killed at least 180 people.

“Sunni (Deobandi) extremists have targeted Hazara with guns and bombs while they participate in religious processions, pray in mosques, travel to work, or just go about daily life,” said Brad Adams, Asia director. “There is no travel route, no shopping trip, no school run, no work commute that is safe for the Hazara. The government’s failure to put an end to these attacks is as shocking as it is unacceptable.”

The ongoing attacks have meant that the half-million members of the Hazara community in Quetta live in fear, compelled to restrict their movements, leading to economic hardship and curtailed access to education and employment. This oppressive situation has prompted large numbers of Hazara to flee Pakistan for refuge in other countries.

Since 2008, Pakistan’s Shia Muslim community has been the target of an unprecedented escalation in sectarian violence as Sunni militants have killed thousands of Shia across the country. The Lashkar-e-Jhangvi (LeJ), group has claimed responsibility for most attacks, yet many of its leaders continue to play command and leadership roles and avoid prosecution or otherwise evade accountability. A number of convicted high-profile LeJ militants and suspects in custody have escaped from military and civilian detention in circumstances the authorities have been unable to explain. The LeJ and its mother group Sipah-e-Sahaba Pakistan (SSP) are currently banned in Pakistan but are freely operating with a new name Ahle Sunnat Wal Jamat (ASWJ) under the leadership of Ahmed Ludhyanvi and Malik Ishaq. The latter is the founding chairman of LeJ.

On January 10, 2013, the suicide bombing of a snooker club in Quetta frequented by Hazaras killed 96 people and injured at least 150. Many of the victims were caught in a second blast 10 minutes after the first, striking those who had gone to the aid of the wounded. On February 17, 2013, a bomb exploded in a vegetable market in Quetta’s Hazara Town, killing at least 84 Hazara and injuring more than 160. The LeJ claimed responsibility for both attacks, the bloodiest attacks from sectarian violence in Pakistan since independence in 1947.

Civilian and military security forces deployed in Balochistan have done little to investigate attacks on Hazara or take steps to prevent the next attack. Many Hazara told Human Rights Watch that discriminatory attitudes and hostility towards them by elected officials and state security services are an important reason why such attacks go uninvestigated and unpunished.

The LeJ has also killed with increasing impunity members of the Frontier Corps paramilitary or police assigned to protect Shia processions, pilgrimages, and Hazara neighborhoods. While the Pakistani military and political authorities deny any complicity in the LeJ’s abuses or sympathy for its activities, the LeJ has historically benefitted from ties with elements in the country’s security services.

Pakistani and Balochistan authorities claim to have arrested dozens of suspects in attacks against Shia since 2008, but only a handful are known to have been convicted. Pakistan’s government should disband and disarm the LeJ and criminally investigate its leadership and others implicated in crimes. Pakistan’s international allies and donors should press the government to uphold its international human rights obligations and promote good governance by investigating sectarian killings in Balochistan and prosecuting all those responsible.

“Government officials and security forces need to understand that failure to tackle LeJ atrocities is no longer an option,” Adams said. “Inaction in the face of the slaughter of the Hazara and the wider Shia community is not only a callous betrayal of its own citizens, but suggests state complicity in allowing these crimes to continue.”

Lashkar-e-Jhangvi (LeJ) and the Hazara
Pakistan’s current population is estimated at approximately 185 million, of whom approximately 95 percent are Muslim. Sunnis represent approximately 75 percent of this population and Shias 20 percent. The Hazara Shia community is concentrated in Quetta and is estimated to be around 500,000. However, Deobandis represent only 15-20% of Pakistan’s Sunni Muslims. The LeJ (or SSP-ASWJ) is an entirley Deobandi group, it has also killed hundreds of Sunni Sufis, Barelvis in addition to thousands of Shias.

The emergence in Afghanistan in 1994 of the Pakistan-government-backed Taliban, militant Sunni Muslims who view Shia as blasphemers, unleashed a new wave of persecution against the Hazara in Afghanistan. In August 1998, when Taliban forces entered the multi-ethnic northern Afghan city of Mazar-i Sharif, they killed at least 2,000 civilians, the majority of them Hazaras.

A number of Pakistanis, including members of the extremist Sunni Deobandi group Sipah-i-Sahaba (SSP) and its offshoot, the Lashkar-e-Jhangvi (LeJ), fought on the side of the Taliban in Mazar-e Sharif. The links between these Afghan and Pakistani Sunni militant groups and the flood of Hazara into Balochistan prompted a rise in persecution of the Hazara in that province.

The Pakistani military ruler at the time, Gen. Pervez Musharraf, banned the LeJ in 2002, but the ban has not hobbled the LeJ’s ability to carry out sectarian attacks across Pakistan. These include attacks against the Hazara community in Quetta in collaboration with the Taliban.

Since 2002, Malik Ishaq has been the LeJ’s operational chief. Ishaq has been prosecuted for alleged involvement in about 44 incidents of violence that involved the killings of 70 people, mostly from Pakistan’s Shia community. However, the courts have not convicted Ishaq for any of those killings and have acquitted him in 40 terrorism-related cases, including three acquittals by a Rawalpindi court on May 29, 2014 on the basis that “evidence against Ishaq was not sufficient for further proceedings.”

The failure to bring Ishaq to justice underscores both the crisis of Pakistan’s criminal justice system and the impunity for serious abuses this failure facilitates. Usman Saifullah Kurd has been operational chief of the LeJ in Balochistan since at least 2002. Media reports allege that he has been involved in hundreds of killings across the country, particularly Balochistan.

Accounts from “‘We are the Walking Dead’”
“I drive coaches on the route to the Iran border. [The gunmen] came speeding just as we entered Mastung district and intercepted us. I don’t remember how many men there were, but there were all armed with Kalashnikovs [assault rifles] and rocket launchers. They told us to get out. They asked who the Sunnis were, asking for names. Then they told the Sunnis to run. We jumped and ran for our lives. Everybody was so scared … someone ran in this direction and someone in that direction. But while they allowed everybody who was not a Shia to get away, they made sure that the Shias stayed on the bus. Afterward they made them get out and opened fire. I saw it while taking shelter in a nearby building.”
–Sunni Bus Driver, Quetta

“I had left the shop 10 minutes prior to the attack. There were four shops owned and run by Hazara Shias in one row and all four were attacked together. Six to seven people on motorbikes came and opened fire. They killed the Hazaras who were working in the shops and also those who were working at the back in the storeroom. I later learned that, two days before the attack, someone came to a Pashtun shopkeeper whose shop was four shops down from the Hazara-owned shops and asked which ones were owned by Hazaras. The attackers knew exactly how many Hazaras worked in those shops and where. They knew that there were people working in the storerooms as well, which is why they went to the back of the shops and killed people.”
–Hazara Shopkeeper, Quetta

“Yusuf was a handsome young boy. He was 22 years old and studying business at a local college. As soon as the [Eid] prayers ended, Yusuf went out of the mosque to greet some friends – I saw him leave. Then the blast took place. Some of the dead and injured had already been rushed to hospital so we went to the Civil Hospital. I walked into the emergency and there was a line of bodies with shrouds covering their faces. I lifted the cover off the first and it was my son. His body was totally burned – there was a cavity where his heart had been and his entire body was marked with pellets. I recognized him only by his hands.

The government is increasingly failing in its duty to protect us. There is only the law of the jungle or worse if you are Shia. I have a good business, I pay taxes but I still feel I am a second-class citizen in Pakistan. Why are Shias to be killed? Why does the government allow Lashkar-e-Jhangvi to kill us?”
–Hazara victim’s father, Quetta 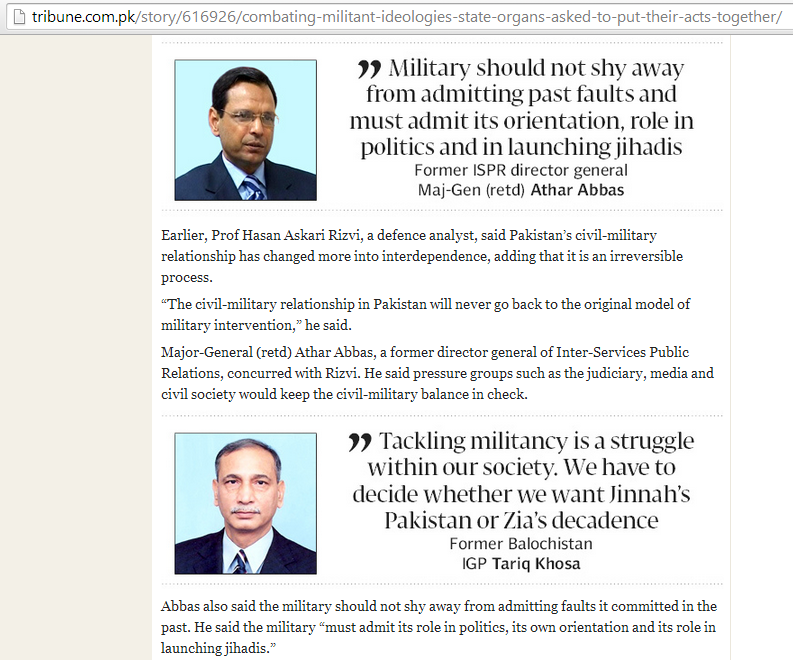