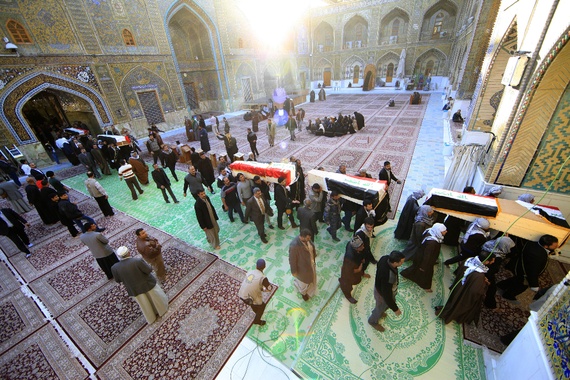 Mourners in Najaf carry the coffins of Iraqi Special Forces soldiers killed in clashes with Wahabi militants in Ramadi, in January 2014. (Ahmad Mousa/Reuters)

Yes, the Iraq War was a disaster of historic proportions. Yes, seeing its architects return to prime time to smugly slam President Obama while taking no responsibility for their own, far greater, failures is infuriating.

But sooner or later, honest liberals will have to admit that Obama’s Iraq policy has been a disaster. Since the president took office, Iraqi Prime Minister Nouri al-Maliki has grown ever more tyrannical and ever more sectarian, driving his country’s Sunnis toward revolt. Since Obama took office, Iraq watchers—including those within his own administration—have warned that unless the United States pushed hard for inclusive government, the country would slide back into civil war. Yet the White House has been so eager to put Iraq in America’s rearview mirror that, publicly at least, it has given Maliki an almost-free pass. Until now, when it may be too late.

Obama inherited an Iraq where better security had created an opportunity for better government. The Bush administration’s troop “surge” did not solve the country’s underlying divisions. But by retaking Sunni areas from insurgents, it gave Iraq’s politicians the chance to forge a government inclusive enough to keep the country together.

The problem was that Maliki wasn’t interested in such a government. Rather than integrate the Sunni Awakening fighters who had helped subdue al-Qaeda into Iraq’s army, Maliki arrested them. In the run-up to his 2010 reelection bid, Maliki’s Electoral Commission disqualified more than 500, mostly Sunni, candidates on charges that they had ties to Saddam Hussein’s Baath Party.

For the Obama administration, however, tangling with Maliki meant investing time and energy in Iraq, a country it desperately wanted to pivot away from. A few months before the 2010 elections, according to Dexter Filkins in The New Yorker, “American diplomats in Iraq sent a rare dissenting cable to Washington, complaining that the U.S., with its combination of support and indifference, was encouraging Maliki’s authoritarian tendencies.”

When Iraqis went to the polls in March 2010, they gave a narrow plurality to the Iraqiya List, an alliance of parties that enjoyed significant Sunni support but was led by Ayad Allawi, a secular Shiite. Under pressure from Maliki, however, an Iraqi judge allowed the prime minister’s Dawa Party—which had finished a close second—to form a government instead. According to Emma Sky, chief political adviser to General Raymond Odierno, who commanded U.S. forces in Iraq, American officials knew this violated Iraq’s constitution. But they never publicly challenged Maliki’s power grab, which was backed by Iran, perhaps because they believed his claim that Iraq’s Shiites would never accept a Sunni-aligned government. “The message” that America’s acquiescence “sent to Iraq’s people and politicians alike,” wrote the Brookings Institution’s Kenneth Pollack, “was that the United States under the new Obama administration was no longer going to enforce the rules of the democratic road…. [This] undermined the reform of Iraqi politics and resurrected the specter of the failed state and the civil war.” According to Filkins, one American diplomat in Iraq resigned in disgust.

By that fall, to its credit, the U.S. had helped craft an agreement in which Maliki remained prime minister but Iraqiya controlled key ministries. Yet as Ned Parker, the Reuters bureau chief in Baghdad, later detailed, “Washington quickly disengaged from actually ensuring that the provisions of the deal were implemented.” In his book, The Dispensable Nation, Vali Nasr, who worked at the State Department at the time, notes that the “fragile power-sharing arrangement … required close American management. But the Obama administration had no time or energy for that. Instead it anxiously eyed the exits, with its one thought to get out. It stopped protecting the political process just when talk of American withdrawal turned the heat back up under the long-simmering power struggle that pitted the Shias, Sunnis, and Kurds against one another.”

Under an agreement signed by George W. Bush, the U.S. was to withdraw forces from Iraq by the end of 2011. American military officials, fearful that Iraq might unravel without U.S. supervision, wanted to keep 20,000 to 25,000 troops in the country after that. Obama now claims that maintaining any residual force was impossible because Iraq’s parliament would not give U.S. soldiers immunity from prosecution. Given how unpopular America’s military presence was among ordinary Iraqis, that may well be true. But we can’t fully know because Obama—eager to tout a full withdrawal from Iraq in his reelection campaign—didn’t push hard to keep troops in the country. As a former senior White House official told Peter Baker of The New York Times, “We really didn’t want to be there and [Maliki] really didn’t want us there.… [Y]ou had a president who was going to be running for re-election, and getting out of Iraq was going to be a big statement.”

In recent days, Republicans have slammed Obama for withdrawing U.S. troops from Iraq. But the real problem with America’s military withdrawal was that it exacerbated a diplomatic withdrawal that had been underway since Obama took office.

The decline of U.S. leverage in Iraq simply reinforced the attitude Obama had held since 2009: Let Maliki do whatever he wants so long as he keeps Iraq off the front page.

On December 12, 2011, just days before the final U.S. troops departed Iraq, Maliki visited the White House. According to Nasr, he told Obama that Vice President Tariq al-Hashimi, an Iraqiya leader and the highest-ranking Sunni in his government, supported terrorism. Maliki, argues Nasr, was testing Obama, probing to see how the U.S. would react if he began cleansing his government of Sunnis. Obama replied that it was a domestic Iraqi affair. After the meeting, Nasr claims, Maliki told aides, “See! The Americans don’t care.”

In public remarks after the meeting, Obama praised Maliki for leading “Iraq’s most inclusive government yet.” Iraq’s Deputy Prime Minister, Saleh al-Mutlaq, another Sunni, told CNN he was “shocked” by the president’s comments. “There will be a day,” he predicted, “whereby the Americans will realize that they were deceived by al-Maliki … and they will regret that.”

A week later, the Iraqi government issued a warrant for Hashimi’s arrest. Thirteen of his bodyguards were arrested and tortured. Hashimi fled the country and, while in exile, was sentenced to death.

“Over the next 18 months,” writes Pollack, “many Sunni leaders were arrested or driven from politics, including some of the most non-sectarian, non-violent, practical and technocratic.” Enraged by Maliki’s behavior, and emboldened by the prospect of a Sunni takeover in neighboring Syria, Iraqi Sunnis began reconnecting with their old jihadist allies. Yet, in public at least, the Obama administration still acted as if all was well.

In March 2013, Maliki sent troops to arrest Rafi Issawi, Iraq’s former finance minister and a well-regarded Sunni moderate who had criticized the prime minister’s growing authoritarianism. In a Los Angeles Times op-ed later that month, Iraq expert Henri Barkey called the move “another nail in the coffin for a unified Iraq.” Iraq, he warned, “is on its way to dissolution, and the United States is doing nothing to stop it” because “Washington seems petrified about crossing Maliki.”

That fall, Maliki prepared to visit the White House again. Three days before he arrived, Emma Sky, the former adviser to General Odierno, co-authored a New York Times op-ed entitled “Maliki’s Democratic Farce,” in which she argued that, “Too often, Mr. Maliki has misinterpreted American backing for his government as a carte blanche for uncompromising behavior.” The day before Maliki arrived, six senators—including Democrats Carl Levin and Robert Menendez—sent the White House a letter warning that, “by too often pursuing a sectarian and authoritarian agenda, Prime Minister Maliki and his allies are disenfranchising Sunni Iraqis…. This failure of governance is driving many Sunni Iraqis into the arms of Al-Qaeda.”

Still, in his public remarks, Obama didn’t even hint that Maliki was doing anything wrong. After meeting his Iraqi counterpart on November 1, Obama told the press that, “we appreciate Prime Minister Maliki’s commitment to … ensuring a strong, prosperous, inclusive, and democratic Iraq,” and declared “that we were encouraged by the work that Prime Minister Maliki has done in the past to ensure that all people inside of Iraq—Sunni, Shia, and Kurd—feel that they have a voice in their government.” A former senior administration official told me that, privately, the administration pushed Maliki hard to be more inclusive. If so, it did not work. In late December, less than two months after Maliki’s White House visit, Iraqi troops arrested yet another prominent Sunni critic, Ahmed al-Alwani, chairman of the Iraqi parliament’s economics committee, killing five of Alwani’s guards in the process.

By this January, jihadist rebels from the Islamic State of Iraq and Syria (ISIS, or ISIL) had taken control of much of largely Sunni Anbar province. Vice President Biden—the administration’s point man on Iraq—was now talking to Maliki frequently. But according to White House summaries of Biden’s calls, he still spent more time praising the Iraqi leader than pressuring him. On January 8, the vice president “encouraged the Prime Minister to continue the Iraqi government’s outreach to local, tribal, and national leaders.” On January 18, “The two leaders agreed on the importance of the Iraqi government’s continued outreach to local and tribal leaders in Anbar province.” On January 26, “The Vice President commended the Government of Iraq’s commitment to integrate tribal forces fighting AQI/ISIL into Iraqi security forces.” (The emphases are mine.) For his part, Obama has not spoken to Maliki since their meeting last November.

Finally, last Thursday, in what was widely interpreted as an invitation for Iraqis to push Maliki aside, Obama declared, “that whether he is prime minister or any other leader aspires to lead the country, that it has to be an agenda in which Sunni, Shia and Kurd all feel that they have the opportunity to advance their interest through the political process.” Obama also noted that, “The government in Baghdad has not sufficiently reached out to some of the [Sunni] tribes and been able to bring them into a process that, you know, gives them a sense of being part of—of a unity government or a single nation-state.”

That’s certainly true. The problem is that it took Obama five years to publicly say so—or do anything about it—despite pleas from numerous Iraq experts, some close to his own administration. This inaction was abetted by American journalists. Many of us proved strikingly indifferent to a country about which we once claimed to care deeply.

In recent days, many liberals have rushed to Obama’s defense simply because they are so galled to hear people like Dick Cheney and Bill Kristol lecturing anyone on Iraq. That’s a mistake. While far less egregious than George W. Bush’s errors, Obama’s have been egregious enough. By ignoring Iraq, and refusing to defend democratic principles there, he has helped spawn the disaster we see today.