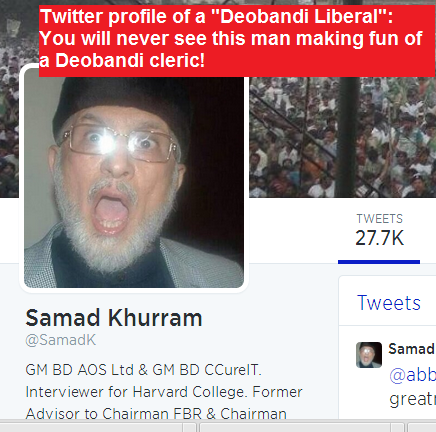 LUBP editor’s note: Ever wondered why secular, pro-human rights and liberal groups and activists in Pakitan, Saudi Arabia, Iraq, Bahrain, Egypt, Malaysia, Indonesia and elsewhere are silent or vague on persecution of Sunni Sufi, Barelvi and Shia Muslims? Every wondered why secular or liberal parties in Pakistan such as ANP, PPP, PKMAP, BRP etc never clearly condemn Deobandi ASWJ terrorists on the genocide of Shia and Sunni Barelvi Muslims and other communities? Well, in the words, of Fanar Haddad, such silent or vague souls may be described as secular sectarians, i.e., while they may claim to champion liberal and human rights causes, deep in their heart, they consider Sunni Sufis, Barelvis, Shias etc as either infidels (kafir) or inferior Muslims or deviant sects of Islam. It’s because of these subtle sectarian biases that they remain selective, vague or silent when it comes to raising voice for the rights of Shias, Sunni Sufis, Ahmadis and other communities. (end note).

A common dichotomy that emerges in discussions of Sunni-Shi‘i “sectarianism” in the contemporary Middle East is that of secular versus sectarian. The logic underlining this false duality is obvious enough: a sect is, after all, a subgroup of a religious denomination that exists as a result of theological or jurisprudential peculiarity as shaped by history, politics, and geography. Therefore, logic would suggest that “secularism” is a plausible antonym for “sectarianism:” a temporal, civic approach to public space rooted in modern understandings of the nation-state and its master institutions and the need to separate church from state. As intuitive as this undoubtedly seems, it remains a false dichotomy that misrepresents sectarian identities and sectarian dynamics in the Arab world and overlooks the role played by class, politics, and power in what is ostensibly a religious issue.

To be sure, there is a certain kind of sectarian agitator and a certain kind of sectarian belligerence that revolves almost entirely around religious dogma and religious issues. There undoubtedly exist people for whom the logic outlined above is the central driver behind sectarian competition and sectarian entrenchment. For such people, the issue is one of competing religious truths. Citizenship, nationalism, and the nation-state are of little relevance to this line of thinking, in which views toward the sectarian other are driven by the obsessive need to uphold religious orthodoxy and a pathological fear or hatred of apostasy.

Naturally, a secular person would seem to be the antithesis of such people. A secular, civic-minded man or woman would not be expected to care about their compatriots’ religious beliefs, no matter how absurd they may seem. The secular person’s concerns with the here and now rise above the divisive superstitions of sectarian dogma and are more concerned with tangible issues of citizenship, rights, social cohesion, and good governance. However, the secular/sectarian dichotomy is only plausible if sectarian dynamics are located in theological rather than temporal disputes. Would the same secular person be able to rise above “sectarianism” if it were rooted in something other than religion—something he or she did not regard as private, archaic, or absurd, such as the nation-state?

The most consistently overlooked aspect of modern sectarian relations in the Arab world is that they are far more rooted in contests over national rather than religious truths. As a result, one need not be particularly devout nor especially concerned with questions of doctrine or dogma to harbor sectarian prejudices, or to be an advocate of sectarian entrenchment; hence the seemingly paradoxical phenomenon of secular but intensely sectarian individuals. The emergence of the Arab nation-state, the concepts it supposedly stood for, and the consequent feelings it nurtured—things like citizenship, equality, entitlement, empowerment, and representation—transformed sectarian identities and sectarian relations by adding a layer, namely the national layer, to how sectarian identities were imagined. As such, alongside a transnational, or “a-national,” sectarian identity rooted in religious issues and religious truths, there was now a national sectarian identity rooted in national issues and national truths. Thus, sectarian polemics between compatriots are likely to revolve around national issues: demographics, national authenticity, national history, political and economic discrimination, and so forth. Conversely, sectarian polemics aimed at a transnational audience are far more likely to revolve around religious truths such as Islamic history, jurisprudence, and dogmatic differences. This discrepancy stands to reason: the former excludes the sectarian other from the nation-state, while the latter excludes the sectarian other from the faith. Unless the nation-state has pretentions to theocracy, the two are unlikely to converge.

Recent years have seen a rise in the importance of dogmatic differences in sectarian dynamics, in part due to the hollowness of older frames of reference as well as the spread of borderless new media and new forms of communication that have increasingly blurred the line between the national and the transnational. Worryingly, this has seen religious sectarian identity inhering upon national sectarian identity as never before in the age of the Arab nation-state. Nevertheless, the prism of the nation-state retains its centrality in sectarian dynamics as evidenced by the fact that, despite everything that has happened since 2003, and not withstanding the delusional ambitions of the fanatics of the Islamic State in Iraq and Syria, Arabs have yet to imagine or develop an appetite for alternatives to the familiar borders of the current nation-state system. As long as sectarian relations are rooted in the prism of the nation-state and revolve around national truths, then religion, theology, and jurisprudence will play a secondary role in sectarian dynamics. In such a framework, the seemingly oxymoronic term “secular sectarians” is anything but.

Secular sectarians may harbor a sense of superiority and deep prejudice against a particular sect because they feel it threatens their conception of what the nation-state should look like or because they feel, rightly or wrongly, that it is a less than authentic or a less than flattering embodiment of the nation-state. If for no reason other than demographic facts, this is particularly evident in secular sectarian opinion toward Shi‘a in the Arab world. But it is important to reiterate that often this is not a theological distaste of Shi‘a and as such is not a wholesale exclusion of them. This sort of anti-Shi‘ism, precisely because it is not rooted in religion, does not target the besuited, Western-educated Shi‘a of the middle or upper classes; rather, it is about the “Shi‘i masses,” the “Shi‘i hordes,”—those who are rooted in a Shi‘i identity and for whom Shi‘i rituals and symbols are central to their expressions and conceptions of self. In that sense, it is much more influenced by considerations of class and region than by jurisprudence. This is precisely why the sectarian/secular dichotomy is misplaced. A secular person—even an out-and-out atheist—can nevertheless be “sectarian” in that a sectarian group comes to be stigmatized as alien or as an inferior class. Likewise, in Arab countries lacking a significant Sunni-Shi‘i divide, we see a similarly exclusionist secular elitism aimed at religious subcultures. This is perhaps best illustrated by the “liberal” reaction to the brief rise of the Muslim Brotherhood in Egypt.

In Iraq, one comes across secular voices stressing their acceptance of Iraq’s oft-trumpeted social mosaic while nevertheless harboring a prejudice bordering on hatred toward “the Shi‘a.” Far from being a theological issue, this disdain is perhaps the result of the belief that the Shi‘a, with their overly developed sect-specific symbolism, rituals, hierarchies, and cultural autonomy, are the greatest threat to the Iraqi secular ideal that wishes sectarian identities to be as private and invisible as possible. It is also a prejudice strongly rooted in social and cultural elitism against the Shi‘a as a group that is essentially perceived as the antithesis of the urbane, secular, Western-influenced ideal of the middle and upper classes: uncouth, unrefined, ignorant, backward, provincial, and overly religious. It is important to note that such views are expressed at a collective rather than an individual level; one can hold such views while having Shi‘i friends, partners, spouses, or even while being a Shi‘a oneself. Indeed, some of the most ardently sectarian Iraqi Sunni politicians are related to Shi‘a through marriage. In this view, Shi‘a are all fine and well provided they are not too embedded in Shi‘i religious and social structures; as long as they are not visibly Shi‘i or, to illustrate: as long as they are Shi‘i of the Ayad Allawi variety. Indeed, this mind-set explains how, despite the intense sectarian entrenchment that has marked post-2003 Iraq, a critical mass of Sunnis put their hopes in a Shi ‘a in the 2010 elections—the crucial nuance being that this particular Shi‘a’s Shi‘ism is invisible and hence acceptable.

It is interesting to note that Iraqi secular sectarian prejudice is mirrored to some extent in Syrian secularist views toward the “Sunni masses,” with both cases carrying strong overtones of regional and class-based elitism. Whether the two unhappy countries’ Ba‘thist legacies account for the recurrence of these dynamics is open to debate, but secular sectarians and a sectarian entrenchment based on socioculturally framed exclusion rather than on religious or theologically framed exclusion is by no means limited to Syria and Iraq.

The Lebanese did not fight each other to eliminate religious heterodoxy or to enforce the jurisprudential teachings of this sect or that sect, nor did Iraqis fight each other because they were outraged by the lack of veneration toward the Imams or the Companions. Similarly, Scottish football hooligans—one of the most common vessels of sectarian entrenchment in Scottish sectarian dynamics—do not chant at and pummel each other to uphold or undermine papal authority. Rather, sectarian entrenchment and mobilization in the modern world more often than not stem from a culturally based sect-centric view of one’s immediate political and social horizons: the neighborhood, the city, or, more commonly, the nation-state. As such, secularists are far from immune to, or innocent of, the very sectarian entrenchment they so loudly decry. In the process, they often borrow from the lexicon of religious sectarian polemics to ridicule, vilify, and exclude the group in question, all in the name of upholding the secular non-sectarian ideal. In a way, what one often encounters amongst Arab secularists is the union of Arab sectarian prejudices and secularism’s more coercive impulses.

In short, secularists in the Arab world are plentiful, but in many cases—though by no means in all cases—they are very much a part of the “sectarianism” for which they mistakenly consider themselves the antithesis or cure.