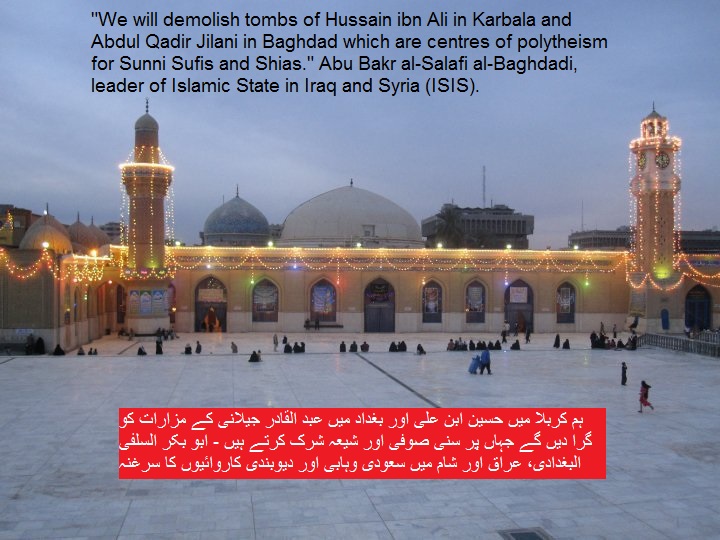 The Western media continues to label the ISIS (Islamic State in Iraq and Syria) a “Sunni” outfit. Certainly this is an old Western ploy to create divisions between Shias and Sunnis. But as the ISIS’s Salafi-Wahabi and Deobandi leaders have been killing both Shias and Sunnis, it is clear that the current Iraq situation is a problem between Shias and Sunnis on one hand, and Salafis and Deobandis, on the other. Why the West continues to promote the Shia-Sunni binary is a separate issue. What this article is about is the danger posed to some of the holiest shrines of Islam. Those who say that Najaf and Karbala are Shia shrines are wrong—and deliberately and maliciously so. Imam Ali and Imam Hussain are not just Shia icons; they are equally revered by the Sunnis.

It is only the Salafis and Deobandis, represented by the ISIS aka ISIL aka Al-Qaeda, who have said that they want to destroy the shrines of Najaf and Karbala. This intention of the ISIS has widely been given coverage by the media—print, electronic, and social. However, what is being concealed from Sunnis is the claim of the ISIS’s leader Abu Bakar al-Salafi al-Baghdadi and his comrades is that they want to destroy the shrine of Ghaus-ul-Azam Abdul Qadir Gilani before marching on to Najaf and Karbala. This is the Saudi agenda. In Saudi Arabia almost all the shrines, Islamic and otherwise, have been demolished, and now the next stop is the destruction of the holy shrines in the rest of the Islamic world. This has been happening in Pakistan in the shape of Deobandis’ attacks on Data Darbar, Abdullah Shah Ghazi etc. This is, after all, what the Salafi-Deobandi ideology aims to do.