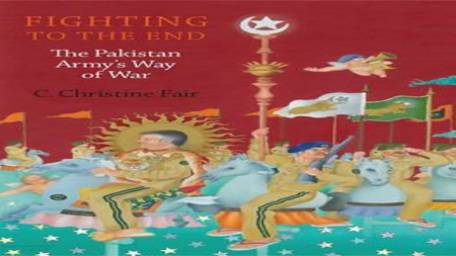 Fair’s assessment of the Pakistan army is out: it is an ideological war machine that is not amenable to any inducements or assuaging of its security concerns. Professor C Christine Fair, a security studies expert at Georgetown University, has produced a formidably comprehensive evaluation of what keeps the Pakistan army ticking, to what end and through what means. The book, divided into 11 chapters, is a painstaking endeavour to understand the strategic or corporate culture of the army, its motivation, motives and moves and what factors within or from outside Pakistan could have any bearing on it.

Professor Fair’s compendium ravages the notion that Pakistan is a security-seeking state located in a rough neighbourhood and if the international powers, especially the USA, could guarantee or facilitate its wellbeing by leaning on India and to an extent on Afghanistan, the country could be weaned off its toxic jihadist habit. The work looks at the Pakistan army through the lens of its own publications including journals and the Green Books to posit that Islam, the Two Nation Theory (TNT), the 1947 Partition, jihad and a fetish for asymmetric warfare via proxies was virtually baked into the entity carved out of the British Indian Army.

The author makes a case that Pakistan and its army have been imbued, from the outset, with an ‘enduring and expanding revisionism’ that seeks to alter not just the territorial status quo vis-à-vis India but also “insists that India and the rest of the world view and treat it as India’s equal”. Professor Fair notes the army has framed the conflict in civilisational terms replete with a fanciful reading of remote and even contemporary history. The ideology, firmly anchored in Islam and the TNT that seeks parity with India, has been the intellectual engine of the Pakistan army since its inception and the use of jihadist irregulars to change the territorial status quo dates back to the 1947 incursion into Kashmir.

Professor Fair notes that “by the 1950s, articles in Pakistan’s professional military publications were already arguing for the viability of initiating and sustaining guerrilla operations within the implied theatre of Indian-controlled Kashmir”. Operation Gibraltar 1965 and Kargil 1999 were but two culminations of this delusional fixation that Pakistan could upstage a bigger adversary. Professor Fair observes that to rationalise such counterintuitive recklessness, the army employed psychological and civilisational rubrics wherein India is first painted as a hegemon out to devour Pakistan.

She notes that these defence analysts then “seek to understand India as Hindu and to place it in opposition to Muslim Pakistan” and “establish that Hindus are dishonourable, meek, pusillanimous, treacherous, and inequitable and then argue that these traits define the country (India)”. This is then contrasted by portraying Muslims — and by extension Pakistan — as honourable, brave, and committed to the Ummah (Muslim nation) and justice. Subsequently, these writers “seek to reveal India as a paper tiger that Pakistan can easily dominate”. Professor Fair states that “this narrative allows the army to continue to argue that it is the only institution that can protect Pakistan” from India, which is portrayed in the defence literature “not only as a perennial source of external conflict but also the primary source of Pakistan’s domestic woes”.

She writes that “India’s Hindu-ness is used to denigrate its worthiness as an opponent” while Pakistan’s defence literature “casts itself as the noble underdog”, which is trying against all odds to protect not just the frontiers but ideological and civilisation honour.
Professor Fair notes that General Ayub Khan made a conscious decision to disseminate the army’s ideological revisionist narrative through Pakistani textbooks and to co-opt religious-political forces. This deliberate and repeated substitution of fable for facts, i.e. indoctrination, has led to where, in Professor Fair’s words, “both military regimes and civilian governments alike pursue the army’s revisionist agenda”.

Professor Fair notes: “The Pakistan army was born an ideological army that specifically espoused Islam as its corporate ideology” and then “quickly began to revise the traditions it inherited from the British Army to reflect the Islamic identity of the new state”. This is in sharp contrast to proponents of appeasement like Professor Anatol Lieven who portray the Pakistan army as a secular outfit carrying on with the scotch and tombola.

The gist of Professor Fair’s thesis is that army’s highest echelons, not just the intelligence wing, adopted and instrumentalised Islam and the TNT to push its objectives at home and across both borders. She notes that under the nuclear umbrella this jihad gained momentum rather than slowing down.
Professor Fair describes Pakistan under its army as a “purely greedy state” defined by Charles Glaser as a state “fundamentally unsatisfied with the status quo, desiring additional territory even when it is not desired for security”. Professor Fair argues against the US continuing to reward Pakistan’s reckless behaviour without seeing a fundamental shift in the revisionist doctrine. She has not, however, argued whether the army’s greed as an economic class is an additional, if not the major, factor in propagation of this ideology-tethered revisionism. This book also has clear policy implications for the new Indian and Afghan governments, which may already have drawn similar conclusions independently.

Professor Fair is not terribly optimistic about the Pakistani civilian leadership or society being able to induce a major shift in the army’s ideological direction due to either being weak and disparate or not actually disagreeing with the army. She has entertained the possibility of a gradual institutional culture change as the army increasingly recruits from non-Punjabi areas of Pakistan. I tend to disagree with that notion, as the army remains a melting pot in which the three non-Punjabi chiefs, the Generals Ayub Khan, Musa Khan and Yahya Khan, the last two also being Shiite, did not veer an inch from the party line. The army’s all-Bengali units perhaps were an exception, thanks to their unique historical situation. The army’s selection process remains meticulous enough to choose a compatible lot amenable to further indoctrination.

Professor Fair correctly notes the extrinsic factors are also unlikely to induce a course correction. This suggests that world powers may opt for a containment regimen or hands-off approach towards Pakistan barring a major geopolitical disaster emanating from this country. Professor Fair’s solidly academic account should have no difficulty finding its way to the top of the charts and the hands of both the Pakistani and non-Pakistani civil and military planners, where it rightly belongs.