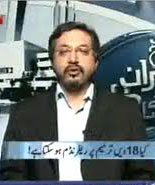 On the fateful day, an exercise not even worth a minute of judicial business took place. A full court reference took place in which Iftikhar Muhammad Chaudhry was eulogized. Already a funny activity, something funnier happened: the broadcast was shown on Geo News exclusively. Off course, no other channel had the broadcast video and hence entire media erupted against Geo and Iftikhar Muhammad Chaudhry.

Geo had a simple argument: it’s exclusive. Iftikhar Muhammad Chaudhry: I had nothing to do with this. So an “investigation” was to take place. While there was nothing to investigate, they found two sacrificial goats or bali kay bakray: Qayyum Siddiqui, the erring reporter – whose days of being a star reporter were coming to an end and Abdul Hameed – a poor PRO at the Supreme Court.

On 1st June, 2014, Jang and The News have published that the error was on the part of Qayyum Siddiqui and Abdul Hameed and Geo and Iftikhar Muhammad Chaudhry had no role to play in it. How convenient! The report also says that as it was an error, therefore, Abdul Hameed has been warned and no action will be taken against Qayyum Siddiqui.

That is so funny. It’s another example of how the self righteous Jang Group and Geo are able to use people for their benefit and then make them as sacrificial goats. As written earlier, Qayyum Siddiqui’s star has already waned as no more exclusive news come out from the foot and mouth of a sitting Chief Justice, unlike Iftikhar Muhammad Chaudhry. The ideal solution was to pin the whole blame on a reporter. Well done Geo and Jang Group. That’s why we say “Screw kar kay Geo!”

Inquiry finds no role of ex-CJ, Geo management Holds reporter, court official responsible; SC says footage or any other press material will be provided to all media channels

ISLAMABAD: Findings of an inquiry report on the leakage of a full court reference video held a reporter and a court official responsible thus clearing former Chief Justice Iftikhar Muhammad Chaudhry who was blamed for favouring the Geo management in this regard.

The apex court on Saturday released findings of an inquiry report on the leakage of a full court reference video to Geo TV on the occasion of former Chief Justice Iftikhar Muhammad Chaudhry’s retirement.

The findings revealed that TV channels were not allowed to make video coverage of the full court reference, and none of their camera crew was invited inside Courtroom No 1.

As per statements of Khalid Azeem of Samaa TV and Shahid Hussain Kamboyo, Public Relations Officer of the Supreme Court, Ch Abdul Hameed, 2-3 days before the full court reference, had told both of them that video coverage of the reference would be privately arranged and the footage would be given to all TV channels.

“The latter’s act caused unnecessary embarrassment to the court administration,” says the report, adding that Ch Abdul Hameed failed to ensure that the footage was simultaneously given to all the TV channels.

There appears mismanagement and lack of proper coordination on his part in the matter, even though later on he took certain steps, including establishing contact with Abdul Qayyum Siddiqui in whose possession the footage was. Had he ensured that the video made by the private cameraman was handed over to PRO Shahid Hussain Kamboyo or any other official of the court, the footage would have been given to all the channels simultaneously as per past practice, and no cause of complaint arisen to anyone in this regard.

The findings observed that it needs to be appreciated that the complainant journalists abided by the media advisories conveyed to them by the PRO to the effect that TV channels were not allowed video coverage of the event and only still photographs inside the courtroom were allowed to be made by the state media photographers.

The report stated that all of them were performing their duties diligently and honestly by remaining present at the venue of the reference and transmitted reports to their channels. Since TV channels were not allowed to make video coverage of the event, therefore, as law-abiding citizens, and remaining true to the ethics of their profession, they just made no attempt to get the footage by hook or crook and even refrained from exploring the possibility of getting it at the cost of violating the media advisories conveyed to them by the SC PRO of the court.

“It was not a case where any court official (Public Relations Officer or anyone else) had called for the journalists to give them footage of the Reference and the complainant journalists had failed to approach him and receive the footage,” says the report, adding that rather, one among the lot got the footage with the understanding that it would be shared with other channels as per past practice, but he unjustifiably withheld it and proceeded to lay the claim of exclusivity.

In this view of the matter, the findings revealed that it was not fair to have accused the complainant journalists of slackness or negligence in the performance of their professional duties.

The report further stated that the airing of the full court reference by Geo TV as exclusive unnecessarily embarrassed the court administration and the act was not in line with the stance of Abdul Qayyum Siddiqui that he and his media group believe in the respect and dignity of the institution because if that were so, he ought not to have aired the footage as exclusive in presence of the media advisories in place.

As regards Ch Abdul Hameed, it has been found that since he had given out to Khalid Azeem of Samaa TV as well as PRO Shahid Hussain Kamboyo much before the reference that the footage would be provided to all the channels, it could not be said that he intended to discriminate any of the channels in providing the footage,” the findings said. He remained unable to achieve the target he had set for himself. In his explanation, he has stated that he had been working with the former chief justice as staff officer/ secretary for a long period and had been performing duties assigned to him as per direction of the then CJ.

As regards the footage issue, he has said that on the day of full court reference, he had multiple pressing engagements and the issue of footage had arisen due to competition between different media channels; no channels was allowed to make the footage; and only a private photographer (Bhatti Studio) was arranged by him for photography of Justice Iftikhar and his family; that he did not know how Geo TV managed to get/ make the said footage, but when he was apprised of the issue, he telephonically asked the Geo correspondent that he had no exclusive right in respect of footage and that he should also share the same with other channels as well.

The report further stated that chain of events that has come on record in the course of the inquiry does suggest that the footage went into the hands of Geo correspondent courtesy Ch Abdul Hameed and the explanation furnished by him on this course is not much convincing. At the same time, what goes in his favour is, as is evident from the statements of Khalid Azeem of Samaa TV and SC PRO Shahid Hussain Kamboyo that while private arrangement of photography/ footage was put in place by him, he also had given out to both of them that the footage would be given to all the channels at the same time.

In this view of the matter, a warning may be issued to him to remain careful in future, the report stated.

The report further revealed that as regards the airing of footage by Geo as exclusive, since it has been found that there was no occasion for such a claim, the footage ought not to have been aired as exclusive. However, being a first reported act of omission or commission on the part of the Geo’s special correspondent, if approved, no further action including a reference to the concerned forum under the law or any other appropriate action, may be taken qua him.

“As regards the grievance of the complainant journalists, it has been established and their position vindicated. In the circumstances, they may be informed that the footage or any other press material to be released by the Court offices would be provided to all the media channels simultaneously as per past practice”, the findings said.

It may be mentioned that when the footage of full court reference in honour of former Chief Justice Iftikhar Muhammad Chaudhry on December 11, 2013, was aired at Geo News only, all the other channels strongly protested. At that time it was hinted that Justice Iftikhar had favoured Geo TV. However, now, after the release of the findings, it has been proved that the former chief justice or the Geo management had nothing to do with all the happenings.

New Chief Justice Tassaduq Hussain Jillani had ordered an inquiry into the matter and had appointed Additional Registrar Muhammad Ali as inquiry officer, who completed his finding in five months.