In an unscripted move, Francis arranged a meeting between the Israeli and Palestinian presidents at the Vatican next month. The meeting, while largely symbolic, shows how the pope has sought to transform his immensely popular appeal into a moral force for peace.

On the second day of a three-day swing through the region, the pope arrived in Bethlehem, the birthplace of Christianity, before heading to Israel for the final leg of his visit.

While Francis mingled warmly with his Israeli hosts, his trip to Bethlehem included the day’s most powerful images as he expressed sympathy and solidarity with the Palestinians.

“I am with you,” he told a group of Palestinian children at a stop in Bethlehem’s Deheishe refugee camp. He also held a private lunch with five Palestinian families who say they have been harmed by Israeli policies.

Even the pope’s arrival in Bethlehem — by helicopter straight from Jordan — carried important symbolic significance. Past papal visits to the West Bank have come through Israel, which captured the territory in the 1967 Mideast war. 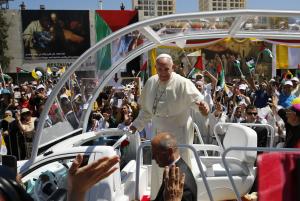 Jubilant Palestinians cheered Francis as he arrived in Bethlehem’s Manger Square, shouting “Viva al-Baba!” or “Long live the pope!” Giant Palestinian flags in red, white, green and black and the Vatican’s yellow-and-white flags decorated the square, which is home to the Church of the Nativity, built over the grotto where tradition says Jesus was born.

In November 2012, the U.N. General Assembly overwhelmingly recognized a “state of Palestine” in the West Bank, Gaza and east Jerusalem — lands Israel captured in the 1967 war — as a non-member observer. The recognition still has little meaning on the ground, with Israel remaining in full control of east Jerusalem, which it annexed in 1967, and the West Bank.

However, it has enabled the Palestinians to start seeking membership in U.N. agencies and accede to international conventions in a further upgrade of their status. Israel objects to the Palestinian campaign, saying it is an attempt to bypass negotiations. 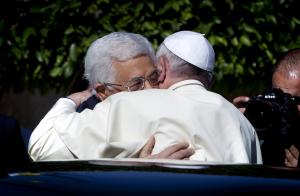 Palestinian President Mahmoud Abbas, left, and Pope Francis hug each other as Francis arrives at the …

Francis’ arrival came weeks after the latest round of U.S.-backed peace talks collapsed. During nine months of negotiations, little — if any — progress was made, and there are no signs of talks resuming anytime soon.

Standing alongside Abbas at a welcome ceremony, Francis declared: “The time has come to put an end to this situation, which has become increasingly unacceptable.”

He said both sides needed to make sacrifices to create two states, with internationally recognized borders, based on mutual security and rights for everyone. He urged both sides to refrain from any actions that would derail peace.

In his remarks, Abbas voiced his concerns about the recent breakdown in peace efforts and lamented the difficult conditions facing the Palestinians.

Abbas said he would welcome papal intervention. “We welcome any initiative from you to make peace a reality in the Holy Land,” Abbas said.

After the meeting, the pope’s open-roof vehicle stopped at a section of the West Bank separation barrier, which encircles Bethlehem on three sides. Israel says the structure is a security measure. The Palestinians say it has gobbled up their land and stifled their economy.

Francis stood up, put a hand on the wall, bowed his head and said a short prayer alongside a section on which “Free Palestine” is scribbled in graffiti.

The Vatican spokesman, the Rev. Federico Lombardi, said Francis had made a “personal decision” to stop by the wall. He said the barrier was a symbol of the conflict and it was appropriate for Francis to pray for peace there.

“This wall is a sign of division, that something is not functioning right,” Lombardi told a news conference in Jerusalem. Francis’ prayer there “signifies for me his desire for peace, for a world without walls,” Lombardi said.

In another unscripted move, Francis issued a surprise joint invitation for Abbas and Israeli President Shimon Peres to come to the Vatican to pray for peace together. “I offer my home in the Vatican as a place for this encounter of prayer,” he said. 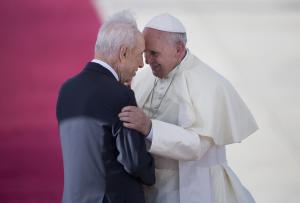 The offices of the Israeli and Palestinian presidents quickly confirmed their acceptance, with the Palestinians saying the meeting would take place June 6.

The invitation — and the acceptances — were unexpected given Francis’ insistence that his three-day visit was a “strictly religious” pilgrimage to commemorate a Catholic-Orthodox anniversary. Lombardi said the pope had discussed the idea with his advisers in the run-up to the visit as a way to give a concrete push to peace efforts.

Peres, a 90-year-old Nobel Peace laureate, holds a largely ceremonial position, and the Vatican meeting will be largely symbolic. But he nonetheless risks upsetting Prime Minister Benjamin Netanyahu with the move.

Netanyahu has expressed anger with politicians that have reached out to Abbas at a time when the Palestinian leader is reconciling with the Islamic militant group Hamas, which controls Gaza. Israel considers Hamas a terrorist group. Netanyahu’s office declined comment. 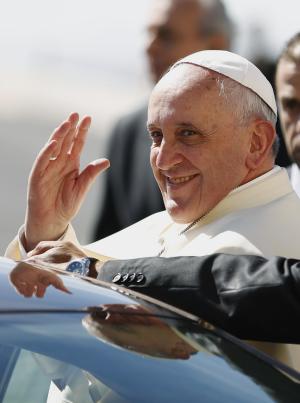 Pope Francis waves upon his arrival at the West Bank town of Bethlehem on Sunday, May 25, 2014. Pope …

Isaac Herzog, Israel’s opposition leader, said the pope, a close friend of Israel, had sent a clear message to Netanyahu through the invitation. Speaking on Channel 2 TV, Herzog said the pope was essentially saying, “Do something. It can’t go on like this.”

Francis flew to Israel’s Ben-Gurion International Airport in Tel Aviv, where he was warmly greeted by an honor guard. With trumpets blaring, the country’s top officials lined up to shake his hand as he walked a red carpet.

Francis deplored Saturday’s deadly shooting at Brussels’ Jewish Museum as a “criminal act of anti-Semitic hatred.” Two Israelis were among the dead.

He also condemned the Holocaust as the “enduring symbol of the depths to which human evil can sink.” Francis is to visit Israel’s national Holocaust memorial, Yad Vashem, on Monday. 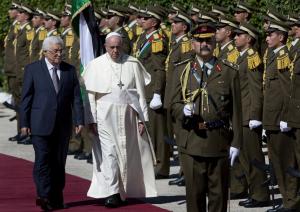 He called for a “just and lasting solution” so that Israelis and Palestinians may live in peace. He said Israel deserves peace and security “within internationally recognized borders,” while the Palestinians have a “right to live with dignity and with freedom of movement” in their own homeland.

In the run-up to Francis’ arrival, Israel experienced a string of vandalism attacks on churches and Vatican properties, presumably by Jewish extremists.

Earlier Sunday, Israeli police arrested 26 Israeli hard-liners protesting outside a contested holy site revered by Catholics as the site of Jesus’ Last Supper and by devout Jews as the burial site of the biblical King David.

Israeli extremists have spread rumors in recent weeks that Israel plans on turning the site over to Vatican control.

Francis made no mention of these incidents, but expressed hope that “this blessed land may be one which has no place for those who, by exploiting and absolutizing the value of their own religious tradition, prove intolerant and violent towards those of others.”

In the spiritual highlight of his visit, the pope late Sunday went to Jerusalem’s Church of the Holy Sepulcher, where Christians believe Jesus was crucified, buried and resurrected, to pray with the spiritual leader of the world’s Orthodox Christians, Ecumenical Patriarch Bartholomew I. Their meeting marked the 50th anniversary of a similar meeting between their predecessors that ended a 900-year rift.

Associated Press writers Karin Laub in Bethlehem and Nicole Winfield and Ariel David in Jerusalem contributed to this story.