“Kufa is not a city but the name of a silent nation. Whenever there is oppression and the nation remains silent, it becomes Kufa.” – Imam Ali Zain al-Abideen (as).

When you see some coward, populist or sellout Shia activists who are mourning Shia Genocide but are reluctant to clearly name and condemn Deobandi terrorists (variously known as ASWJ, LeJ, JeM, TTP, Jundallah, Jaish-ul-Adl etc) who are killing Shias and Sunni Barelvis on a regular basis, you should understand why there were only 72 Shias with Imam Hussain (as) in Karabla.

These coward or populist Shia (and also Sunni and other) activists are not different from those Deobandi and Salafi/Wahabi bigots who revere Imam Hussain but refuse to name and condemn Yazid. They cry Shia genocide but refuse to clearly mention the Deobandi identity of terrorists (who adopt a different name every time they kill Shia Muslims eg ASWJ, LeJ, Jundallah, JeM, Al-Ansaar etc; their names may be different but their Deobandi identity remains their common marker and identifier).

Today (27 Feb 2014), Deobandi ASWJ terrorists, backed by Pashtun and Punjabi Deobandis, killed a senior Shia cleric Professor Taqi Hadi in Karachi. Pashtun and Punjabi Deobandis are major source of power of Deobandi ASWJ-TTP-LeJ terrorists. Therefore, they remain silent on or obfuscate Shia Genocide by Deobandi terrorists. Their silence is reinforced by coward or opulist Shias. Today, we not only condemn Deobandi ASWJ terrorists who killed Professor Taqi Hadi but we also condemn those dishonest Shias, Sunnis, Pashtuns, Punjabis etc who hide the Deobandi identity of ASWJ-TTP terrorists who are not only killing Shias but also Sunni Barelvis, Christians, Ahmadis and ordinary Pakistanis.

If you condemn Shia killings, Ludhyanvi Deobandi too condemns murder of Shias. What is common in you and Ludhyanvi is that both of you do not mention the Deobandi identity of the killers! https://lubpak.net/archives/306721 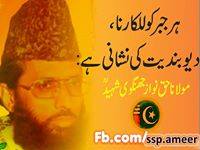