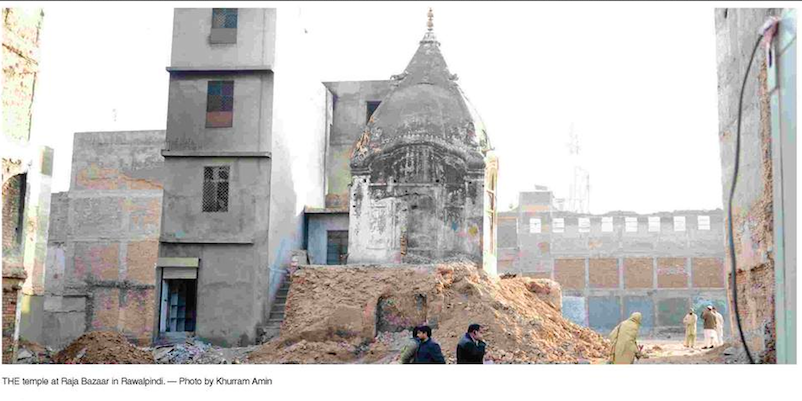 The notorious Deobandi mosque in Raja Bazar, Rawalpindi has been the source of much controversy and violence in the recent history of Rawalpindi’s Muharram and Milad un Nabi processions. So what disturbed the traditional harmony of the peaceful traditions of centuries. The pundits may develop grand political and strategic explanations of foreign involvement, of rise of extremism, international trends and what not. No one has looked deeply into the roots and history of this mosque which is the source of violence. 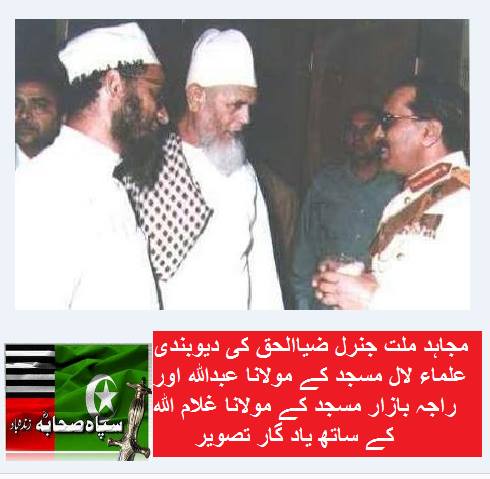 A recent Dawn report by Aamir Yasin along with pictorial evidence proves that this land the mosque was built on was disputed. The pro Taliban military dictator General Zia in his efforts to recruit more brain-washed Fasadis for his war in Afghanistan in order to justify his own un democratic existence, illegally bequeathed this land and possibly other resources of the people of Pakistan to terror groups. This is understandable as this is not the only example of State or disputed lands given to build radical Takfiri Deobandi Terrorists centers under guise of Afghan Jihad by the General Zai and General Hameed Gul. Indeed the Lal Masjid fiasco had it its roots in the same Fasadi Masjed Zarar thinking.

An official of the Evacuee Trust Property Board (ETPB) told Dawn that the department was the owner of the land.

He said after Pakistan came into being, the mosque was built on a piece of land surrounded by the Hindu temple.

During the 1980s, the ETPB handed over an additional piece of land to the seminary on the directives of the then military dictator, Ziaul Haq and the clerics expanded the building.

“Total 103 shops were constructed on Khasra No U-1310 and U1310/A under the name of Madina Market and 22 shops on the temple property, U-1330, 1331 and 1332.” He added that the issue was taken up with the federal secretary religious affairs and minorities in 1985 but it was still not resolved. He admitted that the ETBP did not pursue the matter fearing a religious backlash.

When the mosque and cloth market were burnt in the sectarian clash, rescue officials broke a building in front of the plaza on the Hamilton Road side to enter the premises.

The temple, built on 12×14 square feet, became visible after the demolition of the burnt-down building.

Jag Mohan Arora, a leader of the Hindu community, said he never visited the temple because it remained hidden among the buildings.

“This is very strange that the temple remained out of the sight of the clerics. I was of the view that the temple had already been pulled down because over 10 temples in the city were demolished after the Babri mosque incident in 1992,” he said.

In a report, the ETPB Rawalpindi chapter stated that it owned total two residential properties and six commercial units, comprising the madressah, mosque and the cloth market.

The residential area of the two buildings owned by the ETPB was on rent of Rs590 per month and Rs900 per month, four commercial units adjoining the temple area rented out on Rs93 per month to Rs3,401 per month.

However, the area comprising the madressah, mosque and the cloth market, including Madina Market and Al-Umar Plaza, were under litigation since 1985.

“At present, the case is pending with the federal secretary,” the report said.

When contacted, ETBP assistant administrator Asif Khan said the land on which the mosque and madressah had been built was disputed.

He added that not the whole land but some of its portions given to the seminary during the Zia era were disputed.

Maulana Ashraf Ali, the caretaker of the Taleemul Quran Madressah, told Dawn that his late father Maulana Ghulamullah Khan had established the mosque and seminary after partition.

“Hindus gave their property to my farther before leaving for India and I have all the documents. The land of the mosque is not disputed nor is the mosque built on the temple land. If we had any bad intention, how could the temple remain intact,” he said.

The fact the land was disputed, made the mosque a hot bed of land mafia intrigue and activity. Earlier reports based on Social Media status of Tahir Ashrafi and Ulema e Deoband confirm the the land Mafia story. 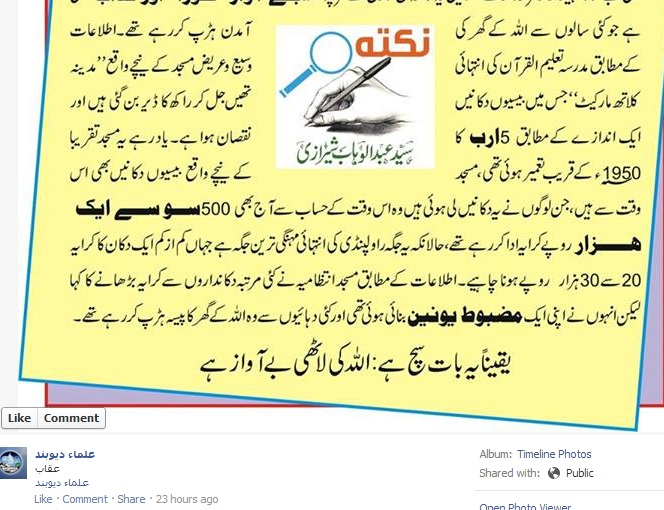 Since there were disputes on ownership by the Deobandi Mosque, there was no legal way to evict the shopkeepers that paid rents which were lower than prevailing market rates. This establishes clear financial motive for the illegal occupiers of the mosque property to create a disturbance and set their own mosque on fire. Clearly the fire was started inside the mosque as the police physically separated the mosque and the mourner’s procession.

We have established clear financial motive to burn the Raja Bazar Mosque because it was not legally possible to evict low or slow paying tenants (shopkeepers) as the land ownership was in dispute.

We have established through testimonial and video evidence that the fire and violence was started from inside the mosque.

We have also established that the land Mafia thugs of Taji Khokher were actively involved in the violence.

The Government of Punjab has not arrested or questioned any one of these parties. Nawaz Shareef and Shabaz Shareef are firm on their support for the Takfiri Deobandi Terrorists. Their assets in Saudi Arabia are testimony to where their loyalties lie.