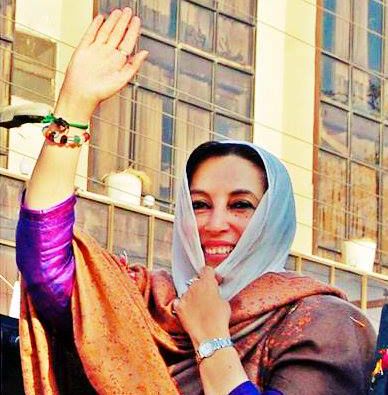 Benazir Bhutto, a character larger than life and the finest political leader among her contemporaries torchbearer of women rights in a society like Pakistan, has rightly been regarded as the daughter of the East and a lady who stood for democracy and the rights of her countrymen. A young woman in her mid-twenties took on the challenge to lead Bhutto’s party after he had been hanged in a farcical trial by a military dictator. She was fearless leader despite the fact that she had suffered personal grief with the death of her father, brothers and thousands of workers who challenged the brutal rule of Gen. Zia. General Zia’s coup brought a repressive regime, when many People’s Party workers were incarcerated, hanged, lashed, and several thousands went underground for years. The young and fiery Benazir Bhutto, leaving her own suffering aside, became a source of strength for her party, which she would lead from the front henceforth. Lived five years of solitary life in jail, she knew that there’s no physical come back for speaking truth despite all such personal trials and tribulations. With every passing day, her faith in democracy neither wavered, nor her desire to see democracy return to the country flourish.

If we take a closer look on the role she played for nation, you will find so many feathers of success to her cap. She gave missile technology, agosta submarine to our navy, she established women bank, women police stations, and women affairs ministry was founded during her first stint in 1988. All these steps suggested that she was committed to the goal of women empowerment in every walk of life. She always encouraged women to participate in politics. She appointed women judges and thousand of lady health visitors to reduce infant mortality. She also spearheaded the moment to make Pakistan polio- free.

Her services for the country were not only confined to the welfare of women, but also her numouros steps on socio-economic front. During her regime, Qasim Port and Steel Mill were expanded; she launched the Keti Bunder and Thar Coal projects, with a view to overcome energy crisis in the country and thereby generates thousands of jobs. She gave jobs to jobless, took steps to improve the system of education and provide health care to people at their doorsteps. In order to eliminate poverty of rural masses, she provided land to landless haris so that they could improve their lives.

When Benazir Bhutto decided to return to Pakistan in 2007 to launch a campaign against the despotic regime of that time, her companions advised her not to come as her life was in danger, but she did not care and said, “I want to be amongst my people and in my country”. I still remember her words vividly, which she spoke at Dubai airport on October 18, 2007. She said, “though death is staring into my eyes, yet I would go back to my country in order to liberate people, liberate country from the shackles of dictatorship and shackles of extremism and terrorism”.

Today, BB is no more with us, her death wasn’t only loss of Pakistan, but the loss of hope, determination, and courage that had existed within us, within you, and within me. That is what we lost on 27th Dec, 2007. Her last wave from her carwas full of love for her countrymen who were languishing under the darkness of dictatorship.

Benazir Bhutto’s killers must know that physical death does not stop history from taking its course. And Benazir has already set the terms of history in this region. In this, Benazir was always a step ahead of her killer’s plans. Her words that echoed in all her later speeches were: “How many Bhuttos will you kill, a Bhutto will come out from every house” – and “Yesterday Bhutto lived; today also, Bhutto lives” already showed that Benazir had already moved beyond life, and become an icon.

Though she is not with us but she has left with us her rich potical and an intellectual capital in the shape of her ideas, her philosophy of democratic, developmental and secular Pakistan where everyone, without discrimination on the basis of cast, color and religion, can live free life. As she rightly said in her book that, “one can kill the person but not an idea.” So, let us pledge to work for the preservation and promotion of her democratic ideals in order to turn Pakistan in tolerant and vibrant society. Let’s continue her dream. Let democracy do not die with her death in Pakistan.

This challenge is a blood-stained challenge,

This challenge you are bound to lose;

A Benazir will be born in every home,

So how many Benazirs will you slay?!