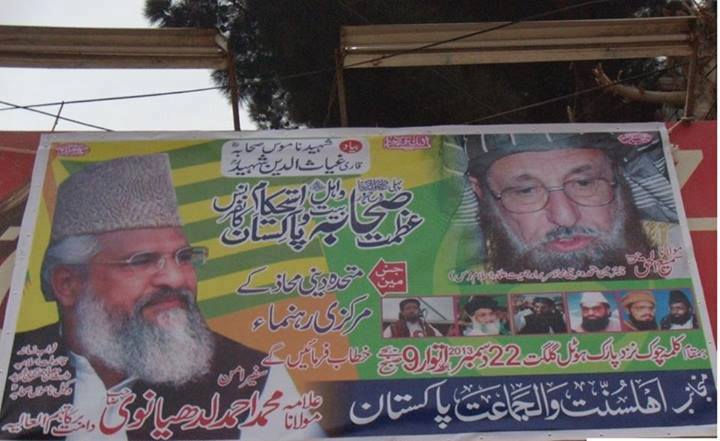 Christmas this year brought a different kind of political crowd to the Pakistan occupied Gilgit-Baltistan. Religious parties like the Wahdat-ul-Muslamin (MWM), Jamat-e-Islami (JIP), Tehrik-e-Islami and Sipaha-e-Sihaba (SSP) along with their firebrand orators ex-Senator Faisal Raza Abidi and Molana Ahmad Ludhianavi graced rallies and congregations in different parts of the region while singing provocative sectarian carols. Santa and his elves have no chance this year as ISI sponsored leaders are here to warm up the atmosphere and offering the local youth free sleigh-rides to heaven.

The icing on the cake has come in the form of thousands of people of Khyber-Pakhtunkhwa blocking the Karakoram Highway (KKH) for several days and causing shortage of food and medical supplies in Gilgit-Baltistan. As roads towards India and Afghanistan remain closed due to political tension, local people have no choice but to depend on the sole KKH for basic supplies. Over the years, KKH has become the most potent tool to control and subjugate the masses of Gilgit-Baltistan. It has also gained the fame as the Killer Highway after attacks on the Shia travelers have become a norm.

Growing sectarianism in the rest of Pakistan provides religious parties the excuse to hold rallies, block roads, burn infrastructure and spread hatred in an already polarized and politically disputed region like Gilgit-Baltistan. The show of street power may benefit Shia and Sunni political parties of Pakistan but it does not bring any good for the locals. Their role is more of a rented crowd which has no means to cope with their daily economic needs and helplessly observes the unraveling of socio-economic fabric.

As expected, the speeches spewing religious hatred did bring its revenue. By December 18, three people were dead leading to an imposition of emergency and giving paramilitary the reason to hold the city hostage and reign in the people with impunity and arbitrary control. The government secret service agencies are also happy having non-state elements around, which help distract the masses from their genuine issues and divide and weaken them on religious lines. Governments encourage such ploys as they have nothing better to offer to the people they rule.

The timing of these engineered sectarian events shows that government is fearful of the locals who have amassed on the roads demanding rights. Local activists say that every time the nation is united demanding socio-economic and political rights, agencies bring in non-state actors to create mayhem and unrest, distracting people from genuine issues. ‘In the name of maintaining law and order, state wants to crush those who care for constitutional rights and better living standards’, says one activist.

Islamabad seems worried as the lawyers of Gilgit-Baltistan have given a call for secession in case government fails to grant the region her long due constitutional status. Further, Syed Haider Rizvi and Gilgit-Baltistan United Movement have started a parallel movement for resumption of trade with India and Afghanistan via historical roads of Kargil, Chorbat, Astore and Ishkoman. Baltistan Students Federation, Progressive Students Alliance, Progressive Youth Front and many other groups have expressed solidarity with these protesters. They are raising voices against taxation without representation, corruption, and price hike. They are asking for better share in natural resource development and revenue from transit and trade, genuine political autonomy, improvement in educational and health facilities, reinstatement of State Subject Rule and end to illegal settlements and forced demographic change; ….the list goes on.

At the same time, thousands of people are on the street in the Diamer district challenging the authority of the Pakistani government to construct Diamer dam. They have asked the local government to resolve the border dispute between Gilgit-Baltistan and Pakistan before embarking on the project. Many members of the Gilgit-Baltistan Legislative Assembly including the cabinet member, Mohammad Naseer, seem to agree with the protesters. The situation is spiraling out of control as the voices of dissent gain traction.

Establishment’s choice of employing sectarian card reflects on its aim to benefit from the land of Gilgit-Baltistan without owning the people and taking care of their genuine needs. Like in Balochistan, Pakistan intends to counter secular voices by patronizing the fanatics. But the situation will not sit well with her neighbor and strategic ally, China, which is already wary of growing Islamic extremism in her restive province, East Turkestan.