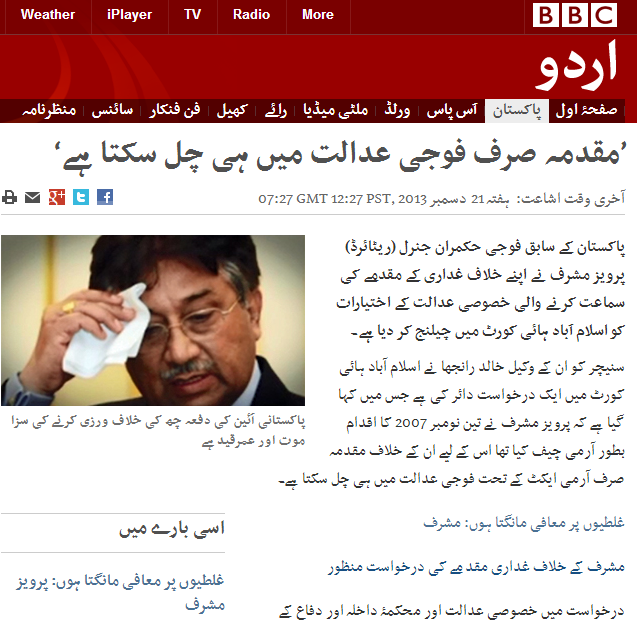 I don’t have any sympathy for Genera Musharraf, the mad dictator of the 21st century. He was the Don, the Chief and the main culprit. There can not be any two opinions about his crime and punishment to set an example for the future.

But the truth is that we have to make an example of many Generals like him, most importantly the most recent Don General Kyani. In a nation where criminals like General Hamid Gul are spitting venom everyday on the mainstream media, and the Dons like General Aslam Beg are making hay and creating hatred, it will be a great shame to try this mad dictator alone and that too by the “angels” who carry the load of sins which are far worse than this particualr ‘Satan’.

It is important to note that the present legal proceedings against General Musharraf the dictator have nothing to do with the democratic struggle of people of Pakistan against the military and extremism. It is the internal fight among the extremists and Pakistani army groups.

I reiterate that I have no sympathy for General Pervez Musharraf. But if he is killed or judicially murdered then it would mean that the extremist lobby in Pakistan army that supports and harbours Taliban and other Deobandi-Wahhabi Jihadists killed him to avenge Musharraf’s stance and actions against the Taliban. He would be punished not because he committed the original sin of overthrowing a constitutional government, but because he fought against extremism in Pakistan army and society. For that, he would deserve one or two good words from me. http://www.bbc.co.uk/urdu/pakistan/2013/12/131221_musharraf_trial_un_appeal_zz.shtml

Appendix: General Musharraf’s recent statement in which he appeals to Pakistani nation to support operation against terrorists of the Taliban and Sipah-e-Sahaba (ASWJ)