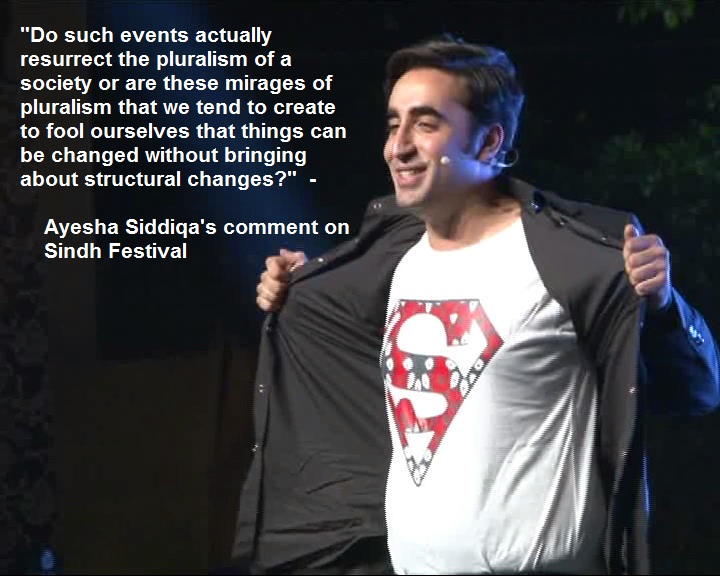 The young leadership of the Pakistan People’s Party recently announced the Sindh festival which is to be held in February 2014 in Thatta and Mohenjo Daro. The various events are meant to invoke the culture of peace and tolerance inherent in the thousands of years old Sindhi civilisation. The announcement, made in a posh ceremony held at a highly upscale venue — Mohatta Palace in Karachi — and attended by the glitterati from Karachi and the diplomatic community, was a good branding exercise. The kite flying, donkey derby and other colourful events are meant to project the traditional pluralist culture of Sindh.

But do such events actually resurrect the pluralism of a society or are these mirages of pluralism that we tend to create to fool ourselves that things can be changed without bringing about structural changes? I remember attending the Cholistan peace festival organised by the Khwaja Farid Foundation a few years ago. Held in the middle of the desert, it involved horse, camel and motorcycle races. The Foundation had even invited the then US Consul General, Brian D Hunt, who was famous for rebuilding shrines in Pakistan as a way of reinvigorating the inherent secularism in our society, especially South Punjab, which has become popular for the jihad industry. A RAND Corporation report of 2007 had indicated Sufi shrines and culture as part of numerous alternative institutions in the Muslim world that the US must engage with to bring about peace. The only problem, however, is that most diplomats or those engaged in branding Sufism as an alternative institution are not aware that the ‘alternative’ has died down due to years of engagement with authority and authoritarianism.

The Cholistan festival must have thrilled the diplomats and representatives of some UN agencies that were there without understanding that the festivity was no reflection on pluralism or the absence of it. It is not very difficult to get people together in a festivity-starved area like the Cholistan desert. Folks will participate without altering their thinking on issues of faith and authority. 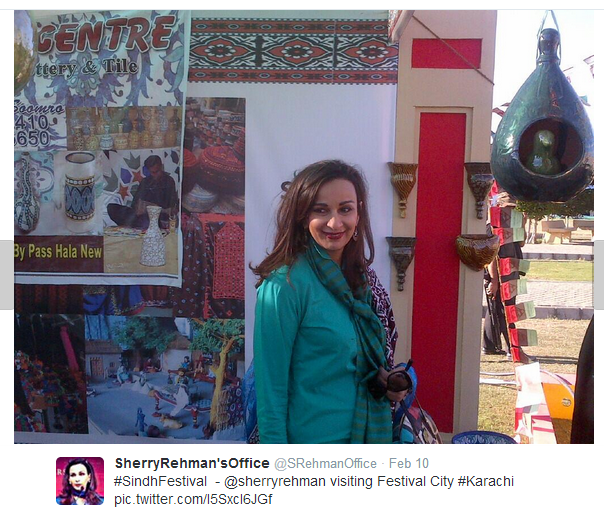 Indubitably, no one should undermine the benefits which will accrue due to the Sindh festival. Hopefully, it will result in completion of the Larkana-Mohenjo-Daro highway that couldn’t be completed in the last five years despite no shortage of funds. It will certainly bring temporary colour and excitement in the lives of ordinary people. But festivals are part of the Sindhi culture and its reality as much as the fact that [Deobandi and Wahhabi-Salafi] militancy and radicalism are growing rapidly in the province [in the shape of Sipah-e-Sahaba Pakistan ASWJ and Jamaat-ud-Dawan JUD-LeT]. The rise in radicalism is not because festivals don’t happen but primarily due to numerous other reasons ranging from the nature of patronage politics to the absence of an alternative sociopolitical narrative. 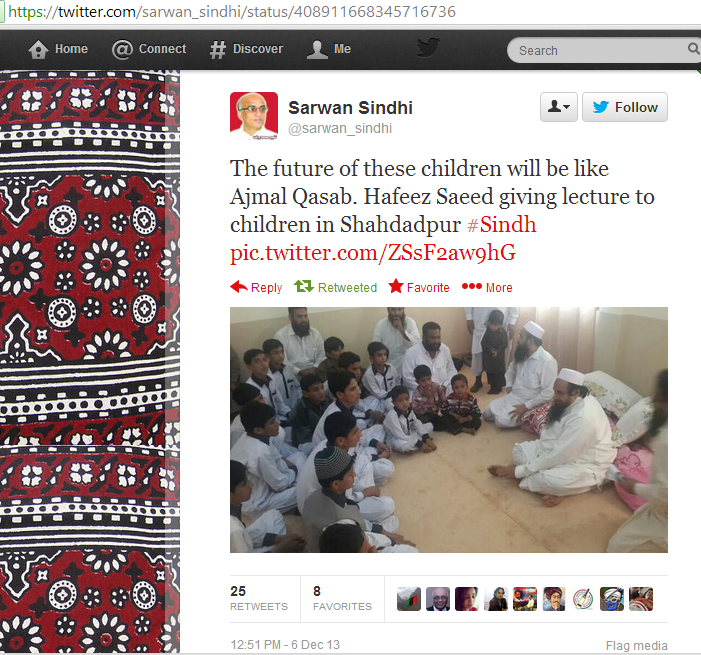 All the young PPP leadership needs to do is step out to find how militant madrassas have emerged throughout the length and breadth of the province. These are not places where militant training is conducted but extremist ideas against other religions and sects are propagated. For those who argue in favour of madrassas being part of the culture, religious seminaries were historically part of the environment and not disconnected from it as hundreds of these Salafi,Deobandi and some Shia madrassas are today. Questions must be asked regarding the role played by the JUI-F (Deobandi) leadership in Sindh in providing an ideological umbrella (to banned Deobandi terrorist outfits eg Sipah-e-Sahaba Pakistan ASWJ and Taliban TTP). Will the festival also reach the kacha (jungle) area in upper Sindh where [Deobandi and Salafi-Wahhabi] militants also train in the guise of dacoits?

The presence of hundreds and thousands of people at Sufi shrines and festivals doesn’t mean anything just as the presence of thousands of people at the Cholistan festival didn’t indicate any change. While looking at what must be done to stem the tide of radicalism, we should also review our imagination of radicalism. Both the gora and brown sahibs are confused about defining radicalism which is normally measured in relation with the picture of the Afghan Taliban. However, radicalism in Punjab and Sindh is far more lethal because it is much better hidden. Here, you will also come across clerics that are less than pious and militants who engage in material corruption. Furthermore, they even hide better behind the guise of tradition and culture and are linked with the local big landowner or feudal lord. In fact, the man in the street in Sindh talks about how the pir, the wadera, the dacoit and the mullah hurt the ordinary people but not necessarily one another.

The big landowner in Sindh is willing to play ball with those representing a more militant world view and ideology as long as he can exercise power often exhibited through turning government schools in his areas into stables or storages (some were vacated during the 2013 elections on request by the ECP since schools were to be used as polling booths). At best, ethnicity is used to maximise control, which makes ethnicity part of the feudal-militancy ideological loop.

Over years, the Sindhi middle class has begun to look away from Sufi traditions due to its association with authoritarianism towards more radical versions of faith as an alternative. This does not mean people will resort to violence but will support ideas which eventually feed violence. This is the Punjab-Sindh model of extremism that is different from the Pashtun areas. Moreover, radicalism is not limited to one ethnicity but spread out amongst all groups and especially in large urban centres. Thus sectarian violence is also on the rise.

Sadly, religious and political radicalism is like toothpaste — once pushed out you can’t put it in unless a new tube/bottle is invented. 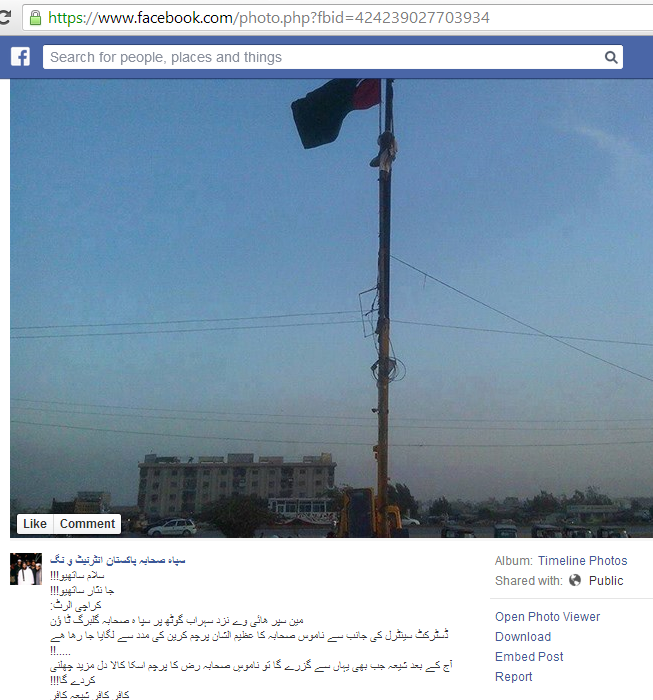