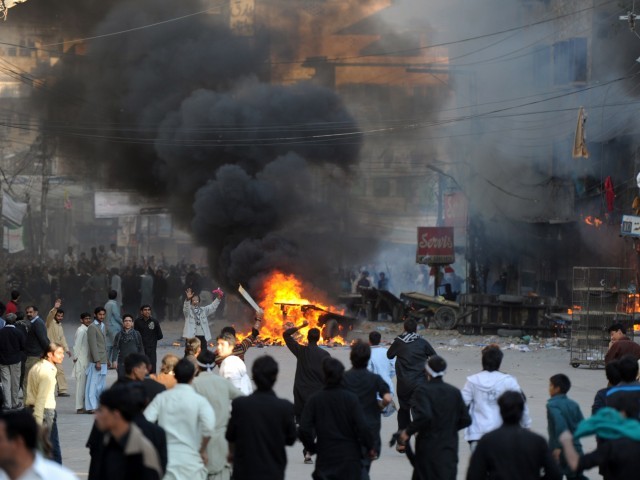 The footage of the Pindi incident clearly shows from where the provocation emanated. Previous reports by security agencies and this footage confirm that:

3. From the rooof top of the Deobandi mosque, there were dozens of members of banned terrorist outfit Sipah-e-Sahaba who attacked the procession with rocks, bricks and gun shots, injuring and killing innocent women, men and children of Shia and Sunni Barelvi communities.

4. The same Deobandi Takfiri terrorists then set the Deobandi mosque on fire to achieve multiple purposes: to defame the Shia and Sunni Barelvi participants of the Ashura procession; to get rid of shopkeepers who were paying only nominal rent to the Deobandi moque clerics; and to pave way for subsequent attacks on Shia mosques in Rawalpindi and other areas of Pakistan.

It is clear that the fire could not have possibly started from the road side as the police were in control and between the procession and the mosque. So who set the mosque on fire from inside the mosque? Why are these aspects not discussed on the Pakistan media?

Why is Punjab administration led by Shahbaz Sharif and Rana Sanaullah arresting hundreds of Shias in Rawalpindi but have not arrested a single Deobandi cleric including Amanullah and Ashraf Ali and other members and office bearers of banned terrorist outfit?

What happened is being disliked by those who support the systematic mistreatment of Shias in Pakistan enforced by the Takfiri Deobandi Terror groups and and connived at by the administration, judiciary and the media.

Their veneer of False Neutrality comes off the moment the Shias react against these inequities. Their aim, backed by intent aimed at a plain result, clearly is to create circumstances in the Republic that render Shias a socially unfavoured identity group. This is being achieved through making fashionable the stereotyped beliefs, attitudes, feelings, and assumptions about Shias in Pakistan that socially sanction and religiously ostracize the community. Meanwhile, sporadic target killings are perpetrated to keep the community on tenterhooks, diminish its capacity to react for the fear of loss of popular sympathy, and to cause its best to leave the country or to be disadvantaged. It’s the age-old combination of inculcating prejudice against the target group backed by overt oppression. False Neutrality is the subtlest form of assisting such oppression.

Let us not forget that the Takfiri Deobandi Terrorist leader of Sipah Sahaba had claimed the Shia terrorists had killed score of children in cold blood at their mosque. They used this excuse to burn and vandalize score of Shia mosques and Imambargahs all over Pakistan. Spurred on by the fake liberal and false neutral media, Takfiri Deobandi media agents like Saleem Safi invited the culprits to their TV shows(Ahmed Lidhanvi) as if they were messengers of piece. However, very few like Ahmed Noorani had the courage to speak the truth. It is important to note this was only done on social media, clearly mainstream media is compromised by the fake liberal elite that runs it.

At the moment LUBP has reports of 500 innocent Shia Muslim students are held unlawfully by Punjab Police and tortured. We condemn this violation of human rights and demand their immediate release.