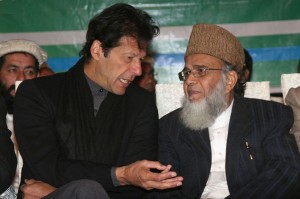 Up till now I always thought very harshly of Imran Khan, my opinion of him was that of a simpleton who lacked any political acumen. His public appearances are usually crass and full of vulgarities in which he often threatens his opponents with a metaphorical cricket bat; one would expect that an Oxford Graduate would be more measured and civil in his rhetoric but alas. This Juvenile behavior is part of the reason why many remaining sane Pakistanis detest him.

Interestingly “Mard-e-Momin” Imran Khan started out as a favorite of lifestyle liberals but never enjoyed electoral success. With repeated failures at the polls, Imran Khan finally decided to spurn his lifestyle liberal fan base and hitched his fledgling political wagon to the issue of North Waziristan and Drones. For past 9 years he has steadfastly stuck to the talking point of having dialogue with the Deobandi Taliban. Many sober analysts saw this as murmurings of a crazed man desperate for electoral success, whose political career never took off. However the time has come that Imran Khan’s political calculation is looked at from a different perspective.

Imran Khan’s views become ever more clear when you piece together the past 10 years in which Pakistani minorities have suffered brutally at the hands of Deobandi Taliban and their myriad allies. The first 7 years of Imran Khan’s political career were forgettable to say the least, notwithstanding an alleged offer by Musharraf to be his PM, Imran Khan’s floundering political career seemed headed to the dustbin of history. And with this one issue he has managed to propel himself to political relevancy.

Imran Khan started gaining traction 3 years after the Afghan invasion by Allied forces when he first started decrying Pakistan Army’s involvement in North Waziristan. His supporters still harken back to his famous sit-down with Hamid Mir and point to his political wisdom in denouncing the so called military operation in North Waziristan. His shrewd political strategy paid off and with the auspices of former ISI chief Ahmed Shuja Pasha, Imran Khan’s political star started to shine brighter than ever.

Imran Khan was the right man for the establishment who with Musharraf’s departure and election of establishment’s hated PPP, wanted an alternate other than usual DPC clowns. With every TV channel running to Imran Khan for a “exclusive” suddenly the youth and non-resident Pakistanis started coalescing around this great leader who was supposedly standing up to the tyrannical, anti Muslim USA. Forget the fact that Imran Khan has his own kids growing up in a western country with their mother, who I doubt practices one iota of the very religion all the PTI faithful’s swear by.

What is ironic is that the very issue with which Imran Khan has gained notoriety is based on a false notion. Fact that Pakistan Military has its soldiers positioned in FATA does not mean that they are actively operating in the region. The Army only begrudgingly entered into North Waziristan because of immense pressure from US. It’s a known fact that Pakistan’s Military establishment is deeply wedded to the infamous “Strategic Depth” policy and the sad truth is that it’s willing to use its own soldiers and minorities as fodder to keep the strategy going.

Coming back to Imran Khan who has steadfastly stuck to his guns, its time that his critics realize that its not a senile 60 year old talking nonsense but a savvy politician with a carefully crafted message for a Deobandized populace. Its not a coincidence that PTI’s political machine is run by western educated professionals who have carefully calibrated his message for the urban masses. To be specific the urban middle class is by many measures more Deobandi than Barelvi and is in absolute lockstep with Imran Khan’s radical agenda.

The sad part is that Imran Khan similarly to Pakistan’s Military Establishment has decided that minorities especially Shias are dispensable. With each atrocity committed by Deobandi Mafia comes a boilerplate condemnatory statement by PTI but no one ever asks Imran Khan about his plan to counter radicalization caused by Deobandi mafia.

It is increasingly evident that Imran Khan considers Deobandi Taliban as his allies. And this is exactly why he never answers the question; what exactly can state of Pakistan offer to the Deobandi Taliban in exchange for peace? The only logical explanation one can extrapolate from the wishy-washy stance Imran Khan has taken, that he is willing to completely surrender FATA to his Deobandi Taliban allies.

Imran Khan in all his statements has never shown willingness to normalize the status of FATA. Its increasingly looking like Shias and Barelvis will be the losers along with other minorities in Imran Khan’s “Naya Pakistan”.