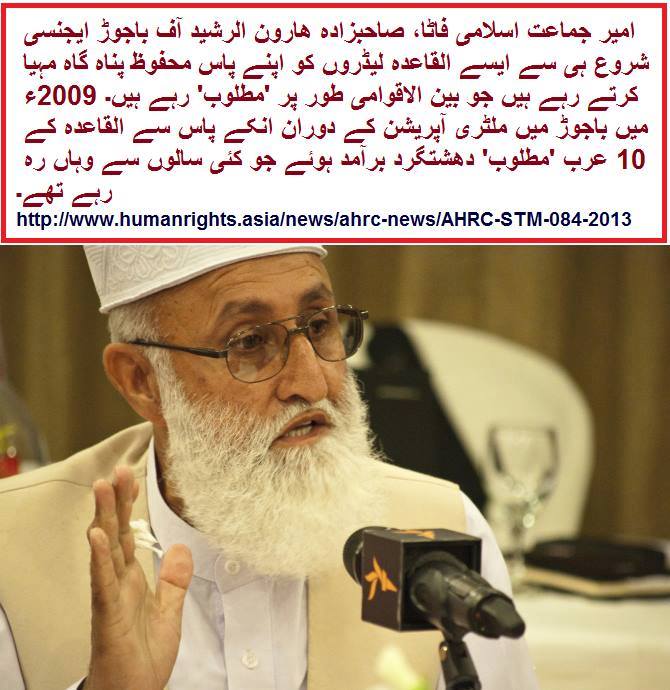 The page adds that…

Abdur Rehman was a resident of Karachi and had also lived in Malaysia. He had been detained by agencies for some time as well. May God take the revenge of his death from everyone who was directly (Pakistani and US states?) or indirectly (Pakistani public for remaining silent?) involved in his death.

Ameer Jamaat-e-Islami Karachi, Hafiz Naeem-ur-Rehman led his funeral prayer in Masjid-ul-Huda in Karachi. Before this, the funeral in absence of Dr. Arshad Waheed (also killed in a drone strike) was also offered in Karachi.

This is not the first time the myth of Jamaat-e-Islami as a harmless political organisation has been busted. Jamaat is the fountainhead of all terrorist organisations in Pakistan and they support all organisations and terrorist outfits overtly or covertly, as suitable. Recently, there have been cases when terrorists belonging to Al-Qaeda and other outfists were found hiding in hostel rooms allotted to Jamaat-e-Islami activists in Punjab University and University of Engineering and Technology Lahore. In the past several Al-Qaeda activists have been arrested from JI houses – the prominent case being that of Al Qaeda No. 2 Khalid Sheikh Muhammad who was arrested from Rawalpindi house of a  female Jamaat Naazima.

The Facebook profile of Abdul Rehman Shujaat can be accessed here. A quick review of his profile and posts shows he was interested in following subjects as far as his social media presence is concerned:

His other status messages are to express his excitement as he “is riding bike in Karachi” and being present in “city of lights“, “enjoying life in homeland” after probably after returning from Malaysia.

Imran Khan, FazlurRehman, Ahmed Ludhianvi and Munawar Hasan would like us to believe that those killed in drones are either school kids, women, ordinary civilians or some far off creatures who were on a rough road trip to Kazakhstan but lost their way and landed into Waziristan – and the poor souls became the  victim of the drones. This propaganda has been busted on multiple occasions when JI activists have been killed in drone strikes (see this and this) and this case is yet another fresh example. Similarly countless terrorists of Haqqani Network, Mullah Siraj Group and Al-Qaeda have also been killed.

Abdul Rehman was a Hafiz-e-Quran, probably educated at one of the madressahs across the country and was either an Engineering student or a qualified Engineer from NED Karachi. He was by no means an illiterate (read jaahil) misused by some terrorist godfather, as is claimed by apologists saying their is no deep rooted terrorism in our society. This man killed in a drone strike is no alien – his profile as discussed is a typical Pakistani urban youngster. Anyone who has been on social media for a while could relate to his personality. Educated, angry, frustrated, Islam supremacist, politically and socially extreme right wing, tech savy, part time Jihadi… This is high time the people of Pakistan realize that delusion will get them no where. They need to take the head out of the sand and feel the reality. These are people this society has created, they are from among us, look like us, live like us and have it somewhere in them to bust off. The terrorists operating in Pakistan like Sipah Sahaba ASWJ, Taliban, Lashkar e Jhangvi etc recruit this same kind of people and the line between terrorists and Islamist political party are very blur.

Bota Sarwar has done some research on the links between Jamaat-e-Islami and Al-Qaeda, see below.