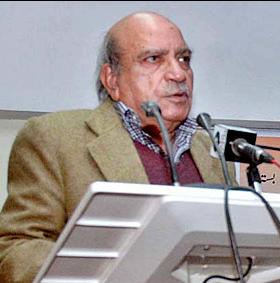 One significant factor in the growing impunity granted to the banned Deobandi terrorist outfit Sipah-e-Sahaba Pakistan (SSP, also known as Lashkar-e-Jhangvi LeJ, currently freely operating as Ahle Sunnat Wal Jamaat ASWJ) is their lack of identification by international human rights organizations. In his recent article in daily Dawn, noted HR activist Mr. I.A. Rehman, probably inadvertently, does not even once identify the Takfiri Deobandi identity of ALL terrorists (ASWJ-LeJ-SSP, TTP etc) who are massacring not only Shias but also Sunni Barelvis, Ahmadis, moderate Deobandis, Hindus and Christains in Pakistan.

Not once in his entire article, does Mr. Rehman clearly mention the common identity of all terrroists, i.e., Takfiri Deobandi. Nor does he cleary mention the identity of the marytred Professor Shabbir Shah, target killed by ASWJ terrorists in Gujrat a few days. Prof Shah wasn’t killed due to his last name Shah, he was killed because he was a Shia Muslim.

While we have huge respect for Mr. Rehman and we do not doubt his intentions, it is the inadvertent misrepresentation of fact in his article which has disturbed not only Shias but also Sunni Barelvi, Ahmadis, Christians and other persecuted communities of Pakistan.

Mr. Rehman’ account makes absolultely no mention of the ASWJ-LeJ-SSP, the banned Deobandi terrorist oufit who kill Shias, Sunni Barelvis, Ahmadis etc and then proudly own it.

Instead Mr. Rehman’s article degenerates into the typical false Sunni-Shia binary; the same tactic which is used by Hamid Mir, Saleem Safi, Orya Maqbool Jan, Najam Sethi etc, who make every attempt to hide the Takfiri Deobandi identity of culprits. Mr. Rehman writes: “No way out can be found without a clear comprehension of the politics of the Shia-Sunni confrontation.”. Of course, he does not tell his readers that those who are killing Shis are also killing Sunni Barelvis, Ahmadis, Christiasn etc.

Next, Mr. Rehman discreetly sneaks in the false Iran-Saudi proxy war narrative which the TTP-ASWJ apologists usually use to rationalize and justify Shia genocide in Pakistan. Mr. Rehman writes: “This politics not only affects Pakistan’s relations with Iran and Saudi Arabia but also has a bearing on its approach to Al Qaeda/ Taliban ambitions in Afghanistan and their challenge to Pakistan’s polity. Any deal, or even negotiations, with the hardline militants on their terms will aggravate sectarian tensions.”

May we ask Mr Rehman: Are Pakistani Christians, who are also being massacred by TTP-ASWJ terrorists, supported by Iran? Who is supporting theTaliban and Al Qaeda in Pakistan? Is it Saudi Arabia or Iran? Who does this false neutral discourse help? Clearly not the victims of the TTP-ASWJ (Sipah-e-Sahaba) target killing!

It is a fact that Sipah-e-Sahaba (ASWJ) and Taliban (TTP) are not only partners but also have shared membership, and both share the Takfiri Deobandi identity.

The other tactic by those who misrepresent violence is to divide the victims of Deobandi terrorism in a manner that obfuscates this issue on several levels. So Shia victims are divided into Shias and Hazaras, even though all of them are being killed for their Shia faith identity and NOT their different ethnic identities.

Why are HR activists omitting the crucial fact that the same Takfiri Deobandi groups that are killing Shias are also killing Sunnis (Barelvis) and other groups? Is it because stating the facts punctures the blatantly misleading and false establishmentarian propaganda. As per this propaganda, the one sided Deobandi violence against all others is misrepresented as Shia Sunni sectarian violence.

By misrepresenting Deobandi violence against all other faith groups in Pakistan as Sunni Shia sectarian violence, HR activists are, perhaps inadvertently, complicit in absolving the military Jihadist establishment and their Saudi Gulf backers of Deobandi groups like SSP-ASWJ and Taliban.

This misrepresentation is then conveniently used by Western media who themselves do not want to embarrass their Saudi corporate owners and powerful lobbyists.