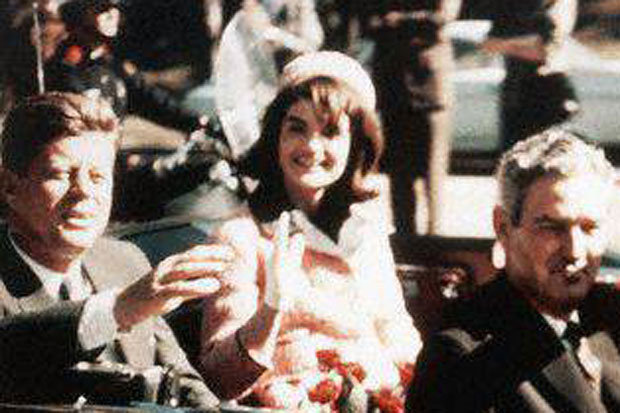 “I was travelling with my father in the Foreign Minister’s private railway carriage in the autumn of 1963 when he shook me awake. “This is no time to sleep,” he said urgently. “There has been a great tragedy. The young President of the United States has been shot.” Though I was only ten and had heard only vaguely of the US president, he made me stay by his side while he received the latest bulletins on the condition of President John F. Kennedy, a man whom he’d met several times at the White House and whom he admired for his liberal social views.”

–Benazir Bhutto, Daughter of the East.

November 22 this year marks the 50th anniversary of the assassination of the 34th President of the United States, John Fitzgerald Kennedy.

JFK, as he was colloquially known, was shot while riding an open-top limousine on a crowded street in Dallas, Texas in the fall of 1963.

The alleged perpetrator, a Communist sympathiser called Lee Harvey Oswald, was said to have carried out the assassination using a World War 2 era rifle from a rudimentary sniper’s nest he set up on the 6th floor of the Texas School Book Depository building that overlooked part of the route chosen for the presidential motorcade. He is said to have shot four bullets, three of which hit Kennedy in the jaws, back and fatally, in the head. Oswald was arrested a few hours later for the murder of another policeman before he was charged for the assassination as well. He himself was shot dead a day later while in police custody by a mob-linked nightclub owner Jack Ruby, ostensibly to spare JFK’s wife the aggravation of a public trial. Till his death, Oswald maintained his innocence and refused to accept any involvement in the JFK assassination.

As is public knowledge, a subsequent investigation led by the US Supreme Court’s Chief Justice Earl Warren established Oswald’s guilt in the assassination and also judged it to be the act of a lone man. But the manner in which Warren and his team carried out this investigation (with an almost single-minded pursuit of endorsing the ‘lone nut’ theory), coupled with the lax security surrounding the President at the time of the assassination and the manner in which Oswald was executed and his case lazily pursued and closed, has raised many a question around the ‘facts’ officially stated and the conflicting rumours that began circulating after the assassination and that continue to inspire curiosity to date. Due to these anomalies, the assassination of JFK is viewed by some as a state-backed execution of the head of state by the nation’s own national security agencies and the military. In other words, it was not the act of a lone nut, rather a conspiracy that involved institutions that we in Pakistan collectively refer to as the Establishment.

Pakistan has its own parallel to the JFK assassination in the martyrdom of the former Prime Minister Mohtarma Benazir Bhutto Shaheed. Both were greatly loved political leaders at the peak of their popularity who met their untimely fates before their promising lives could be fully realised.

Both of them died in almost similar circumstances as well. JFK, as stated, was shot dead by a Marxist ideologue. MBBS was assassinated by a two-man team ostensibly dispatched by Islamist extremists. Both were given their final goodbyes by adoring multitudes in unprecedented outpourings of public grief.

Many have questioned MBBS’s decision to rise out of the sun roof of her SUV at the end of the rally on that fateful day. Much as Kennedy’s security detail were attacked for letting him drive through a politically hostile city like Dallas (where ‘Wanted’ posters were put up for the President) in an open-top limo at a snail’s pace through crowded streets. Both had valid political reasons for their actions. They were at those places for political support raising and calling out their vote banks. As popular leaders, they both felt the need to be seen by their people who had waited for hours just to catch a glimpse of them.

Ultimately, they both paid the greatest price for their affection towards their people.