Editors note: Chief Justice will sorely be missed. Syed Hajjaji is unnecessarily worried about Abual Arsalan, both father and son will be accomodated in the Islamic Emirate of Waziristan. Farwell chant for the chief: Chief teray jaan-nisar, Khudkush bambaar (O Chief Justice, Deobandi suicide bombers of TTP-ASWJ are there to sacrifice lives for you) – See more at: https://lubpak.net/archives/289547#sthash.oBguOq6H.dpuf

Some Liberal fascists RAW agents made a big deal about the retirement of Indian cricket batsmen, Tendulkar. They Call him God there. I don’t know whats the big deal. Just because you score the most runs against every team and just because you raise your country’s profile (big deal) and just because all the cricketing greats from Bradman to Viv Richards to Lara (really what do they know about cricket) think you are the Greatest batsmen ever, some people called him God.

But for Jamaat Islami, the faculty, staff and students of Lal Masjid, Honda Civic Society (Pakistan’s Civil Society), Good Liberals, Tonga Commies, PTI, Chacha Morpheus aka General Hamid Gul (ex-ISI Chief and active ISI alumni) and Taliban, ooops, human rights activists like Tahira Abdullah and other Croissant Communists this was the Real God. The God of Suo Moto. The God of Jihadi Liberation. The God of Puttar Purity. The God of (stalling) Judicial Reform – I introduce you to Hazrat Iftikhar Chaudhary aka Abu Arsalan.

Folk singers dreaded him as did secular Constitutional Drafters. But the ones who feared him the most were the “Krrruppp” “Bad” Governance” PPP! Appoint any technocrat to improve Efficiency – PCO Chaudhary will overrule you. Book Malik Ishaq and Hafiz Saeed and continue their arrest. PCO Chaudhary to the rescue. Award LPG Tender to lowest Bidder – PCO Chaudhary will thwart you. In short, PCO Chaudhary/Abu Arsalan/Hazrat Iftikhar Chaudhary saved us from PPP desperate corruption to increase liquid gas and energy generation. They saved us from PPP’s silly notion of increasing efficiency by appointing technocrats to FBR, NAB etc.

It was Abu Arsalan who rescued the Oppressed and underfunded Pakistan Army in the Memo Case by taking a tough stance against the PPP troika of Zardari-Gillani-Haqqani.

The Only PPP (now ex and not rewarded a seat in last election) to get a favourable verdict from the Supreme Court was the rapist Mian Mithoo. While his former party scrambled to table a Bill against Forced Conversion, Mian Mithoo was supported by the Supreme Court in his forced marriage/conversion or what normal people call rape. In that regard, the Supreme Court also acquitted the Rapists of Mukhtaran Mai.

But the Rapists were not the only ones who probably appreciated the Supreme Court under the Dictatoship, oooops, Chief Justice Ship of Abu Arasalan. Our Jihadis loved him too. And He (Abu Arsalan) loved them in return. When Malik Ishaq boasted about killing Shias in the past and contuing with the same in the future, Abu Arsalan’s Court fed him tea and biscuits and released him for “lack of Evidence”. He and the Lal Masjid Supportors of the Lawyer’s movement even got a Punjab government stipend out of it.

As I nearing the end of my tearful goodbye to the God Of Self Righteous Chauvinsim, I am crying inside at the loss felt by Abu Arsalan’s dearest and most closest supportors. I am of course talking about PML N lead by the poor trillionaire traders of Lahore – Comrades Shareefa.

Just like some districts of Punjab supply the bulk of our armed forces – just like Aitchison College was once the supply line of our cricket team captains- PML N (and its previous lives like IJI) contributed many upstanding, un-compromising and Un-Corruptible Chief Justices. From Justice Anwar ul Haq who ushered in the Golden Era of General Zia ul Haq Shaheed to Justice Saeed uz Zaman Siddique and from Justice Sheikh Riaz Ahmad PCO to PCO Chaudhary – PML N and its past existences have contributed greatly to the cause of ……………….

We in Ghairat world wish and pray that PML N has contributed as generously in financial terms to the next Chief Justice as it did to funding the Lawyer’s Movement.

(where did they all go? Babar Sattar, Salman Akram Raja,
“whats that you say about….. “sinking ship”)

Ok never mind. Au Revoir Abu Arsalan. Say hi to your son Dr. Arsalan and help him earn in his next billion. 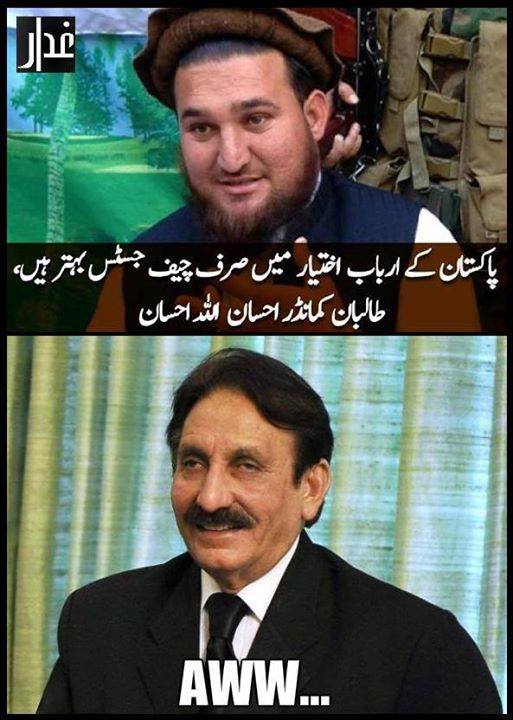