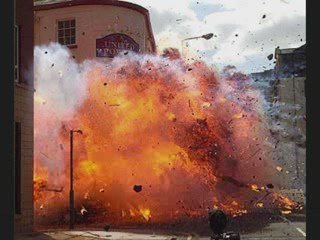 Q)What do you remember of 20th October?

Uzma: We went to the cafeteria at around 3 pm and sat at a table- while me and my friend held the table two other friends went to get something to eat.They returned without getting anything, so I and Anum went towards the counter.

We’d just reached when the blasts happened.Everything happened in one moment. Anum got injured, (her right leg is fractured even now) she yelled at me that “let’s run”.
I wasn’t able to tell her that I couldn’t walk .

Even though I was fully conscious and fully aware of what was going on I seemed unable to speak.I kept reading the kalma- I didnt know how badly I was injured.

A man came and helped my friend onto the stretcher and I heard him tell another man that I was more injured so I should be taken somewhere else. Everywhere people were screaming and it was utter pandemonium – Anum is in treatment in Nescom Hospital (Burn Center).

My left arm was badly injured with shrapnel which had sliced through to the bone and the side of my chest was also severely wounded. My left leg including the knee is fractured and in my left foot three toes are injured.there is a rod from my thigh to knee.The injuries on my right side and face were comparatively minor.

Q) Why were you hesitant to speak up before this?

Uzma: At first I was very scared and frightened.Now I’m no longer scared,however if I think about that day and the blast I feel my sense become numb and my body starts shaking.I’m slowly recovering and returning to my normal life.

Q)What would you like to tell the youth of Pakistan?

Uzma: Don’t be frightened of these blasts instead come forward and unmask these men.Be brave and face the situation with strength and courage.

Q)what were your thoughts during the initial period of the blast?

Uzma:Allah has given me a new life.(Not a second chance). I’ve witnessed death which humbled me as I realized my insignificance and helplessness.Allah is indeed all powerful and only He can change the situation.

Q)How deeply has the incident changed you?

I’ve become much braver- it made me realize what strength I really have.I’m no longer angry-I can’t be angry for everyone took care of me.

I am unable to describe how grateful she was.

And how great every “ordinary” Pakistani really is.We just need to “unmask” the perpetrators and face the situation with the inner strength that is only discovered through times of trial and tribulation.

For that is what tests the true mettle of man.