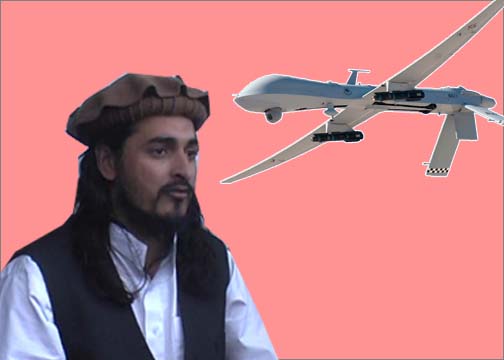 The recent U.S. drone attack that took out Hakeemullah Mehsud, a leader of banned Deobandi terrorist outfit ‘Movement of the Taliban in Pakistan’ (aka TTP), was a positive stroke for the liberal progressives in Pakistan, and a negative for the PML-N establishment. Hakeemullah Mehsud Deobandi followed the al Qaeda ideal of Jihad for a global Salafist-type Caliphate.

These ideals conform to the Saudi-funding contingency that underlies most radical Takfiri groups in Yemen, Somalia, Egypt, as well as the Syrian rebels, along with Pakistan TTP, the Lashkar-e-Jhangvi (LeJ), or, Ahle Sunnat Wal Jamaat Deobandi ASWJ-D, and other Takfiri splinter global terrorists.

The successful drone attacks target high-value terrorist combatants-the ones that historically have wiped out most opposition in the regions of KP and FATA, and still murder and threaten villagers, anti-Taliban,  Christians, Ahmedis, Suuni, Shia, and other minorities in Northern Pakistan. The drones are largely doing the work of the Pakistani Army, who instead of using their world-class power to rid the terrorists who attack Pakistanis, elect instead to ignore the terrorists of FATA, Waziristan, Quetta and elsewhere, who perpetuate genocide on the Shia. It must be remembered that these self-appointed guardians of the Salafist radical religion are far from the moderate Sunni Muslim faith. These Jihadists fall under the protected Strategic Depth program still active in the regional policies of the ISI, Pak Army and the establishment. Why else would the government now want to negotiate with these murderers? It is as if the Taliban suddenly are credible and now an established Pakistan governmental group. They are terrorists. Terrorists should not be negotiated with, they should be isolated and killed, just as they kill innocents. These Salafists use cowardly methods to recruit the youth, some of whom are orphans, radicalized, some are even raped by the very clerics that teach them, and cajoled into new suicide bombers from Madrassas.

The Chief Justice Iftikhar Chaudhry, who is lauded by the establishment, a CJ who releases proven terrorists, a hero amongst us, like Malala, is ridiculed and subject to hideous rumors and conspiracy theories. Even the establishment news organizations are using appeasement to stay in favor. Worse are the recent reports of scandalous taking of under the table money from the government and military; money to perpetuate the bias towards establishment narrative. November 10, 2013, Jang published an interview of Ihsanullah Ihsan Deobandi, as if he were a valid spokesperson to be given free narrative for the public. Ihsanullah Ihsan is the spokesman for supposedly banned TTP.

The moderate Pakistani Muslims that simply want to work, give their daughters and sons an education, find meaningful employment, raise the standard of living, improve infrastructure to Pakistan and with it, the Pakistani economy, increasingly, are being threatened and impeded in such basic human rights by Takfiri Deobandi organizations that are gaining ground under the current elected Taliban-friendly government.

US-Saudi Relationship, its Imperatives, and its Future – by Earl Haywood