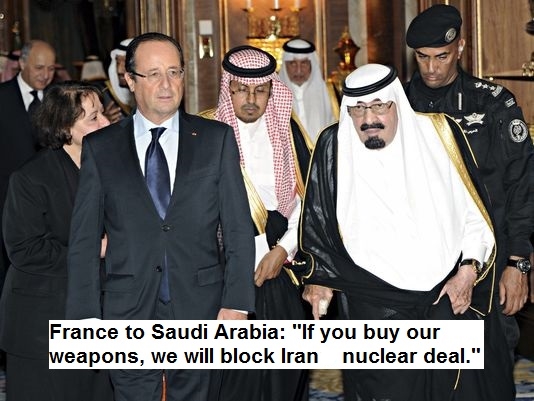 Related post: How the Salafi-Wahhabi agenda is dividing the Muslim world – by Robert Fisk

France, successfully bribed by the Wahhabi Salafi Sheikhdoms of Saudi Arabia and United Arab Emirates, is all set to veto any peaceful resolution of the Iran-West standoff on Iran’s nuclear programme. According to various media reports:

“France’s tough line in major power talks (9-10 November 2013) with Iran may frustrate those looking for an early deal over Tehran’s nuclear programme, but is helping Paris to seal strategic new links with Gulf states and Israel….Foreign Minister Laurent Fabius emerged just after midnight from Saturday’s talks in Geneva to insist more work was needed to remove the risk of an Iranian nuclear bomb, rankling those Western allies who believed they were on the brink of an accord that has eluded negotiators for a decade.

France’s bottom-line position should have come as little surprise to other negotiators heading to Geneva last week…..France is currently struggling to reform its weak domestic economy…Yet with France only last week hit by a second sovereign debt downgrade from ratings agency Standard and Poor’s over its failure to kickstart its sluggish economy, Paris does not hide the fact that it regards exports to the Middle East as a precious source of growth and jobs. In October, France sealed a contract to modernise six naval ships and tankers from Saudi Arabia, having won in July one billion euros worth of contracts with the United Arab Emirates for anti-aircraft radars and military observation satellites.

French officials say they are also optimistic on securing a large deal to deliver anti-aircraft defence missiles to Riyadh and the sale of Rafale fighter jets to neighbouring Qatar.

“The international context, our consistent position on Syria and our relations with Saudi Arabia have contributed to addressing the unimpressive military ties we once had,” Defence Minister Jean-Yves Le Drian said just after the Saudi deal.

The question now is to what extent France is ready to go out on a limb and veto any possible nuclear deal with Iran, with a new round of talks set for November 20.”