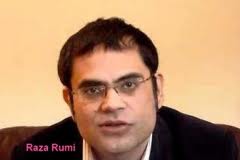 For past few weeks or so Raza Rumi of TFT has been slurring and threatening online activists with dire consequences, even going as far as threatening the families of HR activists. Now one may ask why a seemingly soft spoken and a refined individual like Raza Rumi is engaging in such hateful tactics ? The answer is pretty simple, Raza Rumi’s recent shenanigans have to do with HR activists calling him out on his very shoddy editorship of TFT, not that any one reads the rag. The recent episode started when TFT published a journalistically substandard, atrocious interview of Terrorist Chieftain Ahmed Ludhianvi, by an individual whose journalistic credentials cannot be verified independently. Matter of fact many of the contributors on TFT have no verifiable journalistic or academic credentials.

Putting aside the disaster of an interview or what some have called a prepared questionnaire, Rumi has refused to explain the reasons behind interviewing a blood thirsty terrorist. Ludhianivi is not a run of the mill cleric who has strong opinions about opposing sects but a leader of a terror outfit, which actively advocates, promotes suicide bombings and wonton genocide of Shias in Pakistan. One has to do just a basic Google search to find out what Ludhianivi and his ilk do on regular basis. Not only has Raza Rumi stubbornly and shamefully failed to provide a rationale for giving a hate mongering terrorist like Ludhianivi a platform, he is actively engaging in a vicious,vile hate campaign against HR activists by blaming them of all things, hiding their identities. Granted that anonymous trolling on social media is a problem; however, this has nothing to with such abhorrent behavior. Here are HR activists & common citizens, who justifiably use anonymity to safeguard themselves and their families from a very real threat of ASWJ and their cohorts.

But lo and behold, the very Raza Rumi who is out for blood, of the online activists for using anonymous identities, is publishing anonymous blogs on his own magazine’s website. One example of which is a pro drone blog written by a anonymous writer > http://blogs.thefridaytimes.com/in-defence-of-drones/

These are brave citizen activists who even with pseudo identities are putting their lives in danger, to expose the dirty nexus of Raza Rumi like liberals and ASWJ terrorists. But that is not setting well with Rumi and his companions. Rumi’s hypocrisy seemingly has no end, his mug graces the screens as the token liberal on many pakistani news channels; however, under the veneer of a good liberal hides a vicious opportunist who will promote hardcore terrorists and peddle their agenda. All this dirty work to gain favors from the powers to be. Shame on Raza Rumi for speaking from both sides of his mouth, no one will have any problem if Raza Rumi decides to be upfront about his real intentions, come clean and admit that he agrees with the genocidal agenda of ASWJ. However trying to peddle a fake identity of a soft spoken liberal has to stop, since his horse and pony show is fully exposed. In the end this episode has helped shed light on not only the dual faced Rumi but also many of his companions, who are performing the same tired routine of faking liberalism while promoting and defending terrorists.

Fake liberals like Raza Rumi attack pro rights bloggers threaten them with FIRs or threats by their Takfiri partners ASWJ-D Deobandi Talibaan of Sipah Sahaba Lashker e Jhangvi, when they are asked these questions:

2. Why did Najam Sethi release one hundred and twelve terrorists while he was Caretaker Chief Minister?

The biggest issue seems to be why do some of these pro rights bloggers remain anonymous.